These thick and fluffy black forest pancakes are your answer to a guilt-free breakfast for dessert! Packed with protein and completely sugar free, they are naturally gluten free, low carb, vegan and dairy free!

Catching up from the weekend? Check out the update post here. Also- Giveaway winners were revealed!

Remember when I stated how I was waiting for cherries to be cheap so I could make black forest oatmeal? I think Australia, mother nature or a combination of the two have a secret vendetta against me. 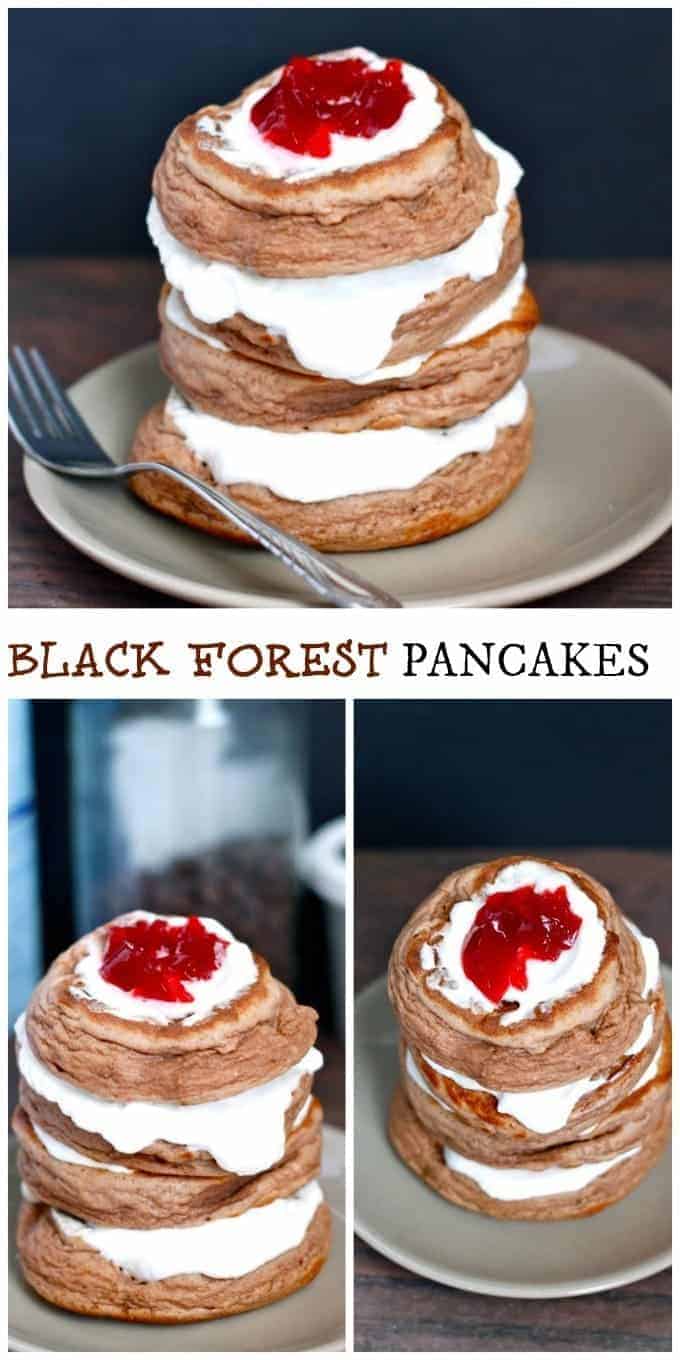 Apologies. I have under delivered. However, to make up for it- I present you pancakes. That always makes things better. Black forest pancakes…without fresh cherries.

The other weekend when I was in Melbourne, I made the executive decision to help mum clean out her pantry. When I say ‘clean out the pantry’- I mean going through it and seeing what I can claim as my own.

Just pass me the ‘son of the year’ crown. 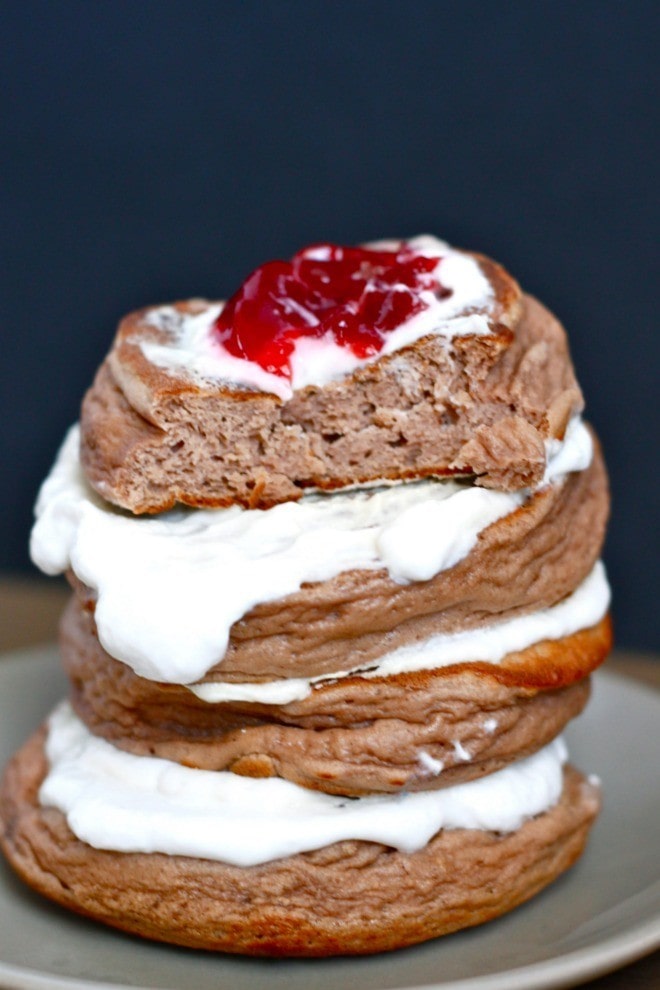 While ‘cleaning’ her pantry, I came across quite the assortment of intriguing items- stuffed vine leaves, peanut butter pretzels (which I had brought back from my  Fall semester in New York…in 2012), shredded coconut (expired), chickpea flour (my mum’s staple flour in many Persian dishes) and a lone jar of what I thought was strawberry jam.

Upon further inspection, the jar of jam was not strawberry but rather cherry jam- which she had brought back from Iran. I’m not the biggest fan of jams because I find them overly sweet and in Australia, very rarely is there an unsweetened variety. This, however, was not 100% cherry jam either.

Friends, it was 2% cherry. TWO. The other 98% was sugar, water and stuff which made it slightly tangy. 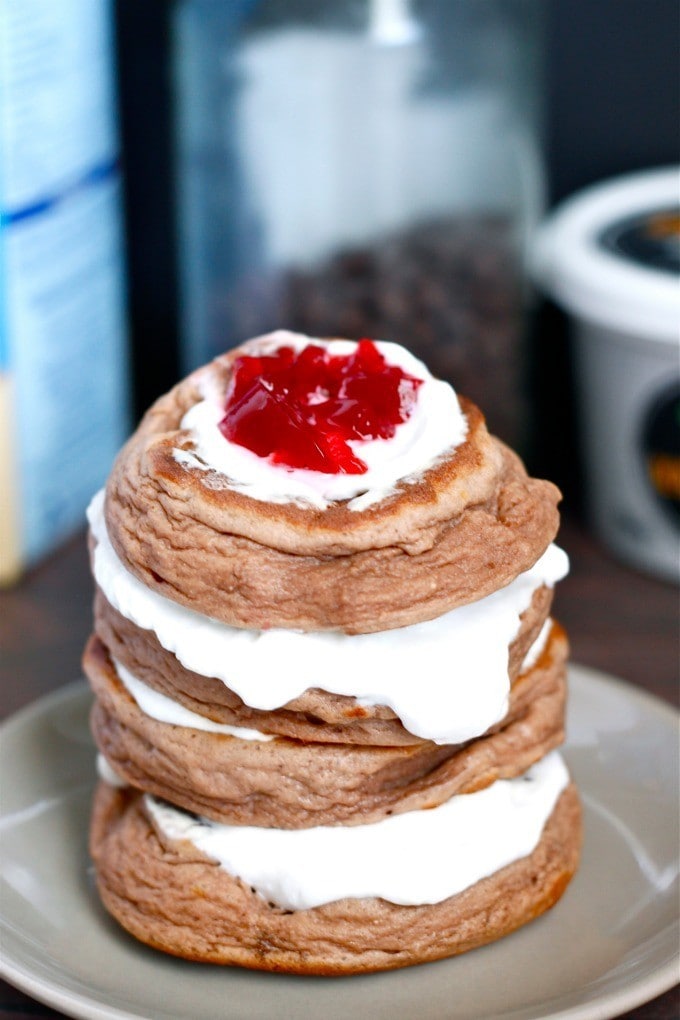 I still will work on the black forest oatmeal but will await the actual cherries- because let’s be honest- digging into a bowl of creamy oatmeal in the morning with bursts of cherries would be amazing- unlike fake cherry jam.

What this jam would be perfect for would be….pancakes. Said pancakes that were made when my friends came over with personalized choices. A thin layer of this fake jam wouldn’t detract away from classic taste of a black forest cake, with the main stars of the show being the whipped cream cheese.

These pancakes are so damn fluffy, you’d be fooled your actually eating a slice of black forest cake. Did you know these pancakes are ridiculously good looking healthy? Yep. They are flourless, gluten free, grain free and high in protein without protein powder! If you omit the fake jam and use Norbu– it is also 100% sugar free.

If you love pancakes, you’ll LOVE these thick and fluffy flourless apple pie pancakes– Check out just how easy they are below!

For the cream frosting

To make the pancakes 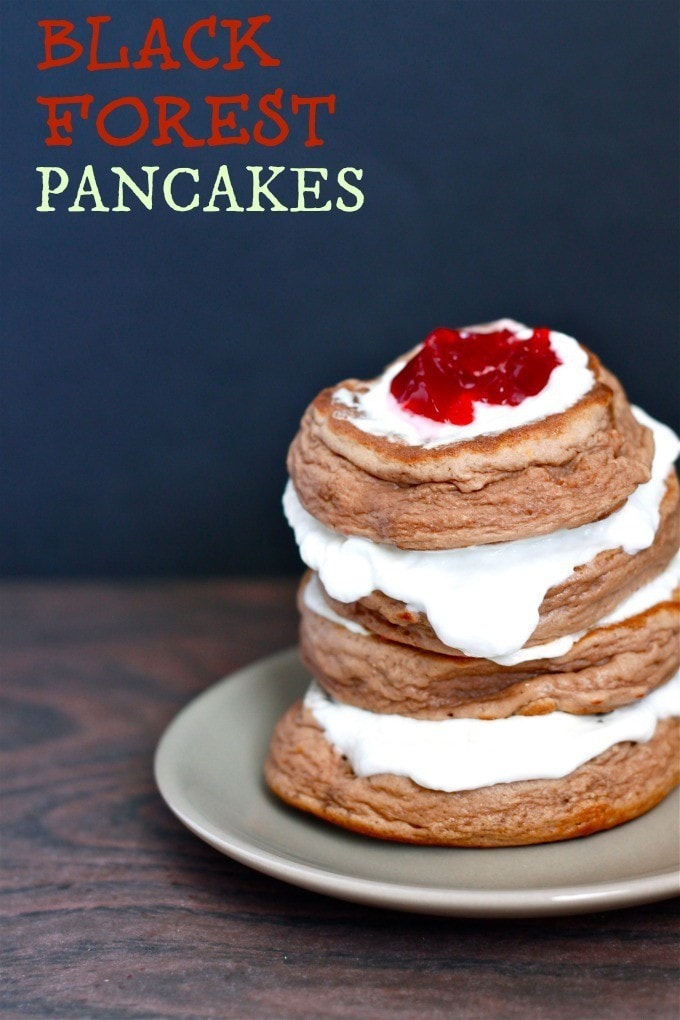 Do you ever raid your families’ kitchen?

What is the most bizarre thing in your kitchen right now?