Hey guys! I don’t usually post on Saturdays but this one is the exception- I was stoked to find out last month that I had been accepted into The Recipe Redux program! For those unaware of this program, it involves a group whom, on a monthly basis, release a ‘secret ingredient’ or ‘theme’ for the upcoming month. Members then have the opportunity to revamp dishes or give them a healthy twist to them! On the 21st of each month, all members post their creations and join a link up with other participants!

For December, we were presented with this-

Good Luck Foods: What will you be serving to get the New Year started with a little luck? Be it black eyed peas and greens, Chinese noodles or even a special family recipe you serve on New Year’s Eve or Day. Please share your good luck dish to start off 2014 in a healthy way.

I had a brunch a few weeks back and after researching ‘foods’ which fell into this category- I found that ’round’ fruits were considered to be ‘Good Luck’. I thought a healthy twist on the traditional apple crumble would be the perfect recipe to makeover! I switched out almond butter in place of butter, omitted the sugar and increased the fruit for natural sweetness, and used rolled oats and oat flour over wholewheat flour. I was impressed with the outcome and was stoked that those I served to it to enjoyed it as much as I did! 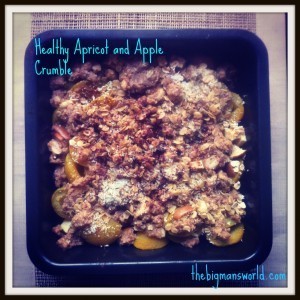 Note- If mixture is not a crumble like texture, add more rolled oats until desired consistency.