A low carb and paleo version of a traditional chicken and mushroom pilaf based off cauliflower rice. High in protein, one pot needed and super simple to whip up! Naturally gluten and grain free. 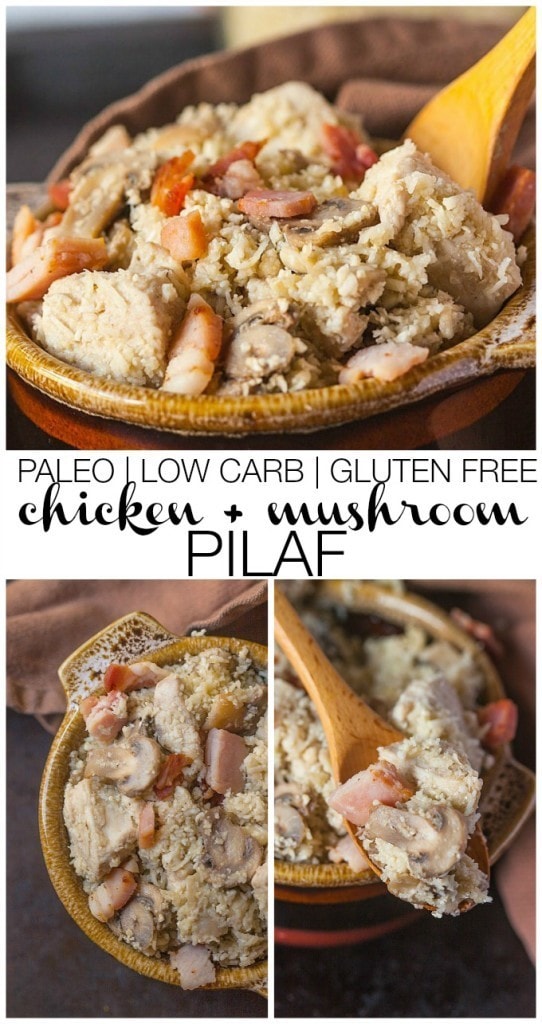 This is a phrase I’ve read many times on multiple blogs sharing recipes for cauliflower rice. I’m not one to proclaim false advertising in my recipes or my content on here so telling you that would be dishonest. It doesn’t taste ‘exactly like white rice.’ I also could most definitely tell the difference. (Ignoring the fact that I made the dish).

Saying that, cauliflower rice does provide a similar ‘bulk’ to rice and one up on it- It absorbs flavour so much better than rice does. For those watching their carbohydrate or calorie intake, it’s a very smart swap. When I first intended on going Paleo for a month, developing a simple (delicious) recipe around cauliflower rice was something I had intended to do. 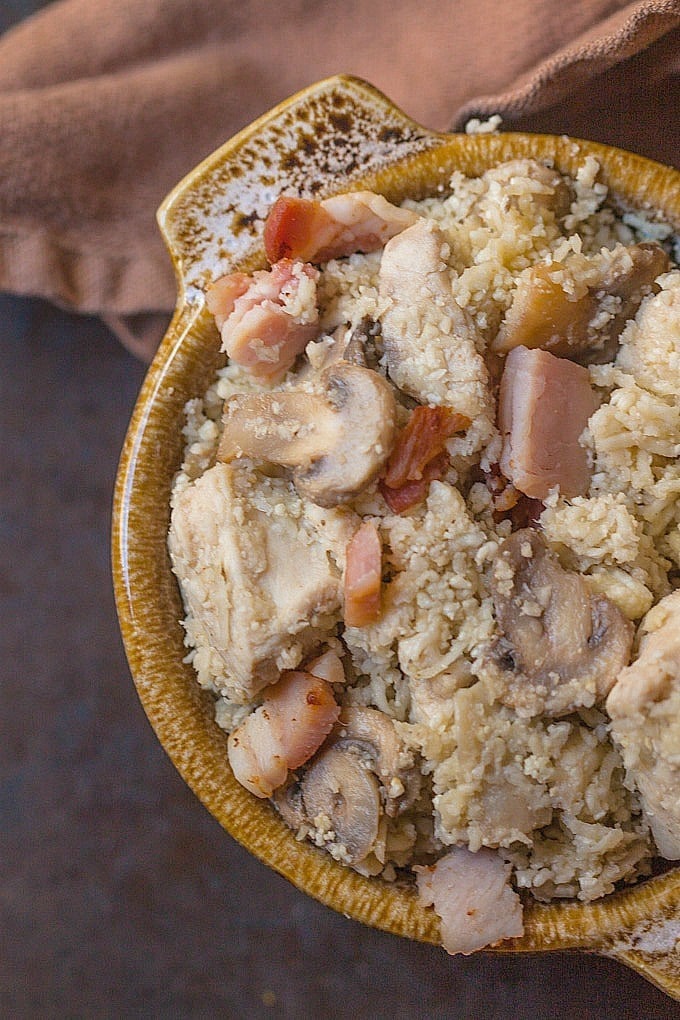 Growing up from a hybrid Chinese/Persian background, rice was central to 95% of all meals. The other 5% was bread, eating out (which probably contained rice) or maybe we were sick and had no appetite. My mum being a talented cook in the kitchen, would have a variety of rice based dishes on hand. Persian style dishes incorporated many spices, flavours and a combination of the sweet and savoury. The Chinese style was more laid back and used more simple ingredients and one or two strong sauces to add flavour.

Ironically, one of my favourite rice dishes came from neither cultures- A chicken and mushroom pilaf. Chicken and mushrooms are one of my all time favourite combinations for a pasta or risotto based dish, especially if there is a delicious, creamy sauce to accompany it. This, however, was only eaten on the rare occasion I would dine out in an Italian restaurant. At home, we’d have something similar but use basmati rice instead of arborio rice and add an Asian based sauce instead of a creamy one. 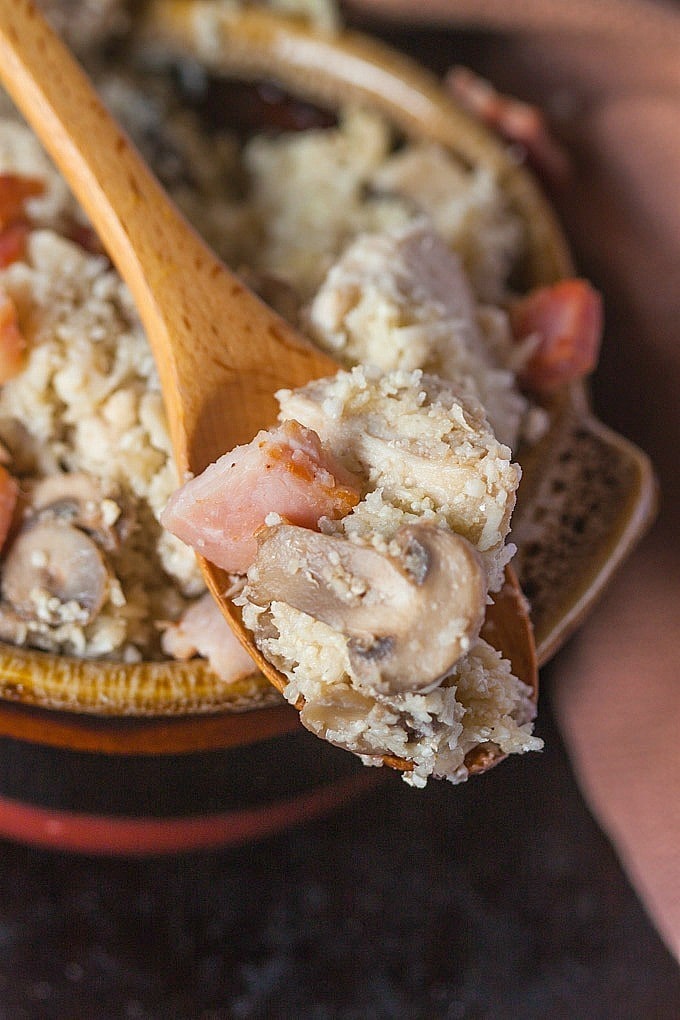 Still treading waters when it comes to Paleo style savoury dishes, I opted to start easy with the Asian style sauce and before messing about with a combination of butter and ‘cream’ blends. I had my doubts before serving it to my friends and ironically, it was their favourite!

Paleo Chicken and Mushroom Pilaf sounds so fancy, but in reality, it’s super simple to whip up. I used one pot and just added ingredients as needed be. The addition of bacon is completely optional but one I would recommend- It pairs well with the simply seasoned chicken.

So is cauliflower rice ‘just like white rice’? No, it isn’t. However, I won’t underestimate it as a decent substitution when rice is not an option. Just like Niki said- I like white rice and I cannot lie. 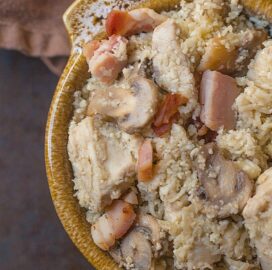 A low carb and paleo version of a traditional chicken and mushroom pilaf based off cauliflower rice. High in protein, one pot needed and super simple to whip up! Naturally gluten and grain free.
No ratings yet
Print Rate
Servings: 4
Author: Arman

This pilaf tastes great the longer it sits, so whip up extra and keep it in the fridge for meals for the week.
For a vegetarian or vegan option, omit the chicken and bacon and add extra mushrooms- The sauce is so flavourful, the simplicity tastes great.
Tried this recipe?Give us a shout at @thebigmansworld or tag #thebigmansworld! 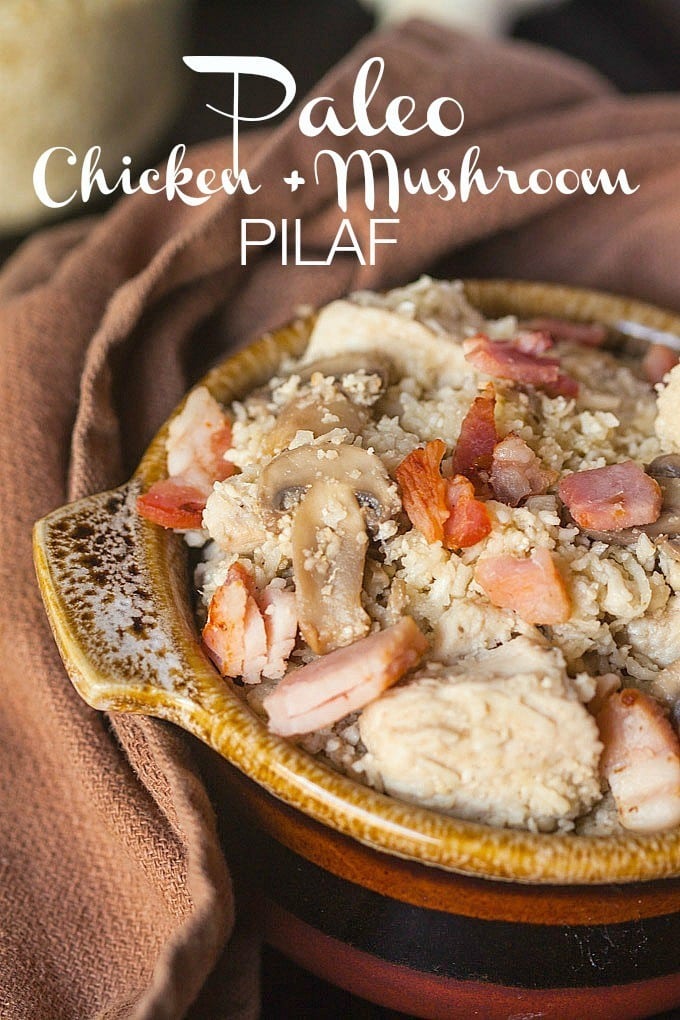 Want more Paleo recipes which are savoury? Check these out! 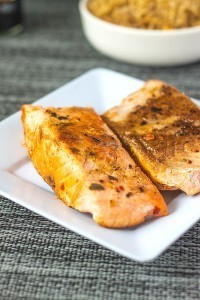 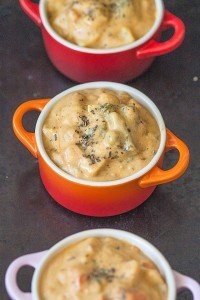 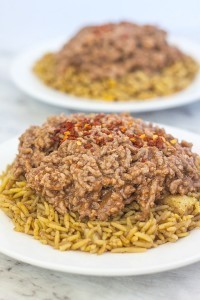 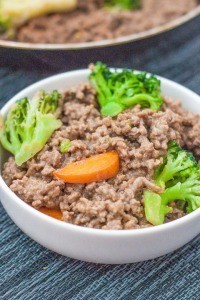