These easy, crispy zucchini cauliflower fritters are your meat-free and veggie and a healthy snack or meal, and need just four ingredients, minus the spices! With an egg-free and grain-free option, these delicious vegetarian patties are naturally gluten-free, vegan, paleo and dairy free!

Wait, who am I? Didn’t I just share a savory recipe last week?

You guys thought I was kidding when I said Nat has a savory side to her. These crispy roasted chickpeas and this fast food favorite are two of her creations. Now? She is back to share with us a delicious SAVORY recipe which incorporates two veggies (including cauliflower rice without being rice) and the infamous zucchini!

I legit can’t wait to see what next month brings…whip out those salt shakers.

A few weeks ago on an evening Pinterest browse, I came across a recipe for veggie nuggets that were loaded up with green good-for-you things, and for some reason, they really called to me. Perhaps because in the image one was being deeply dunked in ketchup, which is the only reason to eat any kind of “nugget” if you ask me. Or perhaps because crispy brown and bite-sized is a much more appealing form for veggies than raw, green, and requiring prep work. 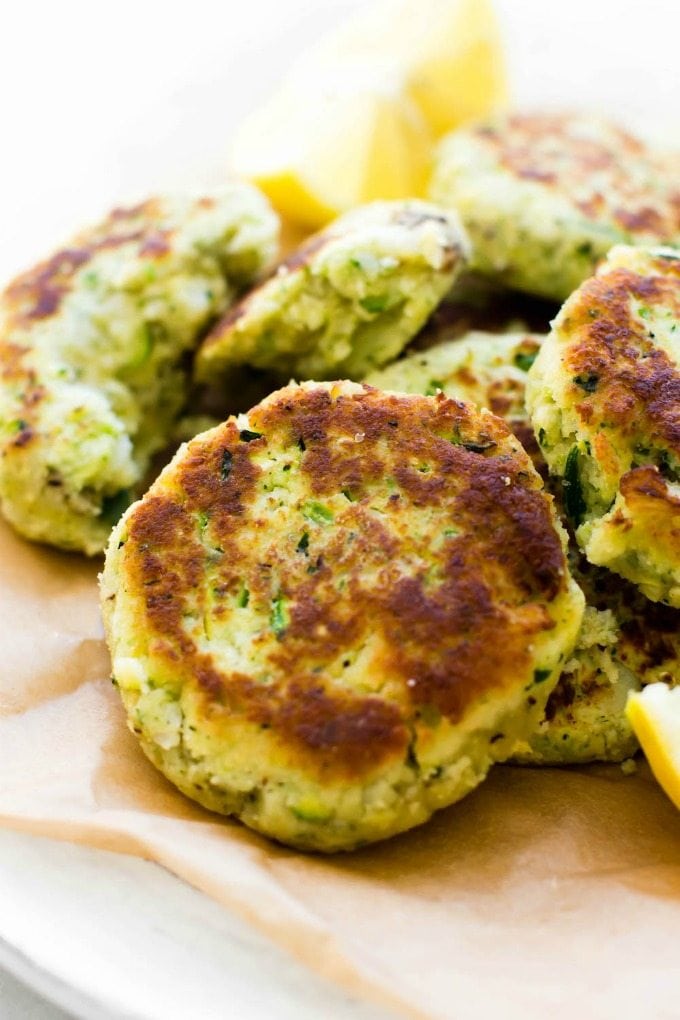 See I am usually on the other end of the recipe equation—coming up with the ingredients and instructions, not following them. And things are much better that way. When it comes to following a recipe I tend to read too fast, modify too freely, and fail quite frequently.

I omitted 3 ingredients, substituted one, added celery because I had it on hand, and didn’t measure anything—it was off to a strong start. Despite all that though, I think they would’ve been okay had I not forgotten one very crucial ingredient: the egg. Or flax egg or gelatin egg, there were options. I forgot them all. Oops.

I’m sure you can already guess where this story is going. They egg-less veggie mixture actually formed nuggets quite well. They were cute, they were oblong, they were in the oven for about 20 minutes before I realized my mistake. Of course, I just let them keep baking at that point and hoped for the best. Maybe the veggies wouldn’t notice there was nothing holding them together.

They noticed. They crumbled.

I still ate most of them very gingerly, and the rest found their way into my dog’s dinner bowl that night. But some good came from this entire crumbly catastrophe—inspiration for this recipe!

These Zucchini Cauliflower Fritters are very different than those nuggets. For one thing, they are fritters, not nuggets because the fritter shape is much more mature. Also, I simplified the ingredient list from 10 down to just 4 ingredients (+ salt and pepper) because 10 was way too much measuring and fuss. Plus carrots are so sweetly snack-perfect a veggie on their own, no need to hide them in fritter form. And I switched from baking to pan-frying because hello crispy delicious exterior. I don’t know about you but I would much rather leave the oil out of the mixture itself and save it for creating extra flavor in the pan. Plus it ended up being less oil in the end anyways.

But most importantly, they don’t fall apart if you so much as look at them funny because I remembered the egg and worked out an egg-free version too!

For either version, there are a few important steps when it comes prepping the veggies. These fritters get their green from zucchini. You can either grate the zucchini by hand or let your food processor do the work for you. The other, more discreet veggie is cauliflower. You want to use already cooked cauliflower because the few minutes of pan-frying will not be enough to cook the cauliflower completely. If you are using frozen cauliflower, that step is already done for you. If you are using fresh, simply steam it for 5 minutes or so until just soft.

After both the veggies are grated, it is crucial that you squeeze out as much extra liquid as possible so you don’t end up with soggy fritters. A towel works, but personally, I love using a nut milk bag if you have one. I find it is even more effective and keeps your dishtowel from turning green.

For the version with egg, you will then add a couple of eggs, a quarter cup of coconut flour, and salt and pepper (plus any other seasonings you like). For the egg-free version, instead of using flax egg I just switched up the flour to a more naturally bind-y variety: all purpose or a gluten-free blend. Both versions are equally easy to shape into fritters and cook on the stove-top, but I personally prefer the texture of the version with egg so if you are not vegan I recommend that one. 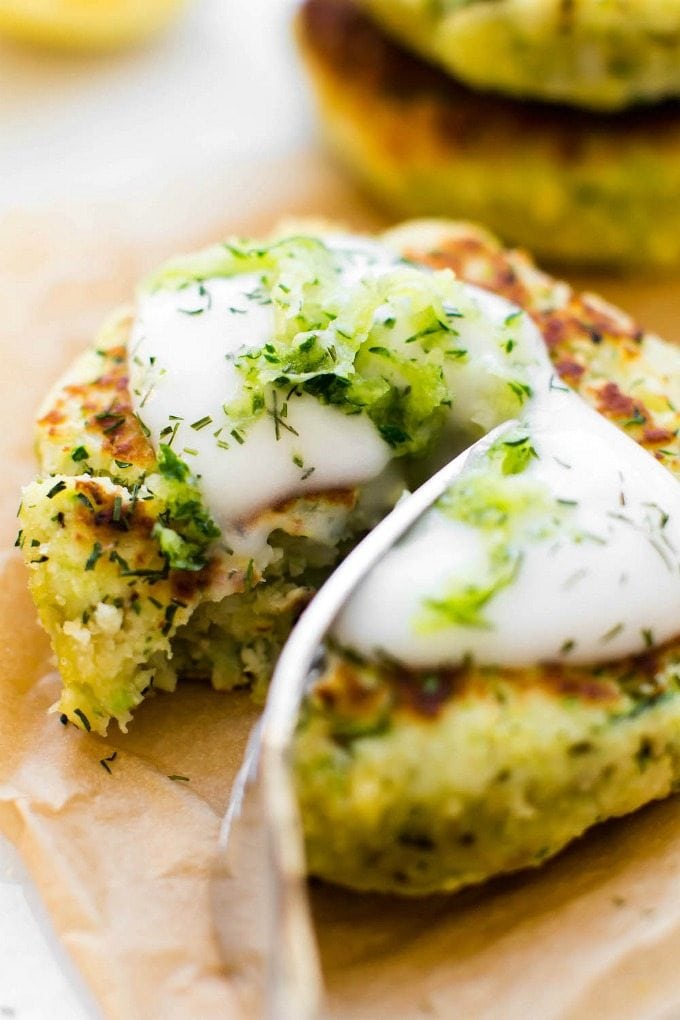 They are great with a dollop of tangy sour cream or a bright herby yogurt sauce on top. Or a simple squeeze of lemon juice. Or picking up and eating finger-food nugget style—ketchup optional but (I can tell you from personal experience) delish!

Fritters can be refrigerated and are freezer friendly.