These vegan brownies are truly the best. Fudgy and gooey in the middle with the crackly tops, they are easy to make and use simple ingredients!

These brownies are proof that vegan desserts can taste like the real thing.

I know I shouldn’t play favorites, but brownies have to be my favorite dessert. Whether they are made with protein or made in the air fryer, I’m a fan.

Contrary to popular belief, brownies are suitable for a vegan diet. Simply omit the eggs and dairy and you are all good.

Why this vegan brownie recipe will be your favorite-

How to make vegan brownies

Start by preparing the flax egg by combining the ground flaxseed with the brewed coffee. Let it sit for 10 minutes for a gel to form.

Next, melt the chocolate, either in the microwave or using a small saucepan over the stove. In a large mixing bowl, whisk together the sugar and butter until smooth. Add the vanilla extract, melted chocolate, and prepared flax eggs and whisk well, until combined and glossy. Sift in the flour, cocoa powder, baking soda, and salt, and mix until just combined. If you like, fold through more chocolate chips.

Now, transfer the batter into a greased square pan. Bake the brownies for 27-30 minutes, or until a skewer comes out mostly clean. Remove the brownies from the oven and let them cool completely, before slicing and serving.

To enjoy brownies warm and gooey, heat in a microwave for 30-45 seconds, and top with some coconut whipped cream or enjoy as is!

Contrary to popular belief, vegan desserts aren’t necessarily healthier than traditional ones. They contain just as many calories, fat, and sugar, if not more. If you’d like a healthier dessert, try healthy brownies.

Is this gluten free?

When made with gluten free flour, this dessert is suitable for celiacs.

What brownie mix is vegan?

Most commercial brownie mixes require eggs and/or butter in them to form the batter. However, you can replace the eggs with an egg substitute and the butter with a butter substitute. 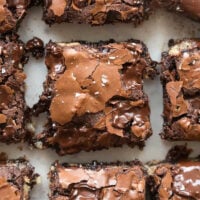 The BEST vegan fudgy brownies recipe that are made in one bowl- no oil, no milk, no dairy but ridiculously gooey! Crispy tops and fudgy in the middle, they are easily made gluten free.
5 from 959 votes
Print Rate
Course: Dessert
Cuisine: American
Prep Time: 10 minutes
Cook Time: 30 minutes
Servings: 12 brownies
Calories: 195kcal
Author: Arman

TO STORE: Store leftovers in the refrigerator, to ensure they remain fresh. They are super gooey and fudgy, so the chilled temperature will ensure they don’t spoil. TO FREEZE: Wrap them in parchment paper individually, and place them in a ziplock bag and store them in the freezer. They will keep well frozen for up to 6 months.