Hands down, these are the best BEST ever churros made with simple ingredients. Crispy on the outside, fluffy on the inside, they take less than 20 minutes to make! Vegan, Gluten Free, Dairy free. 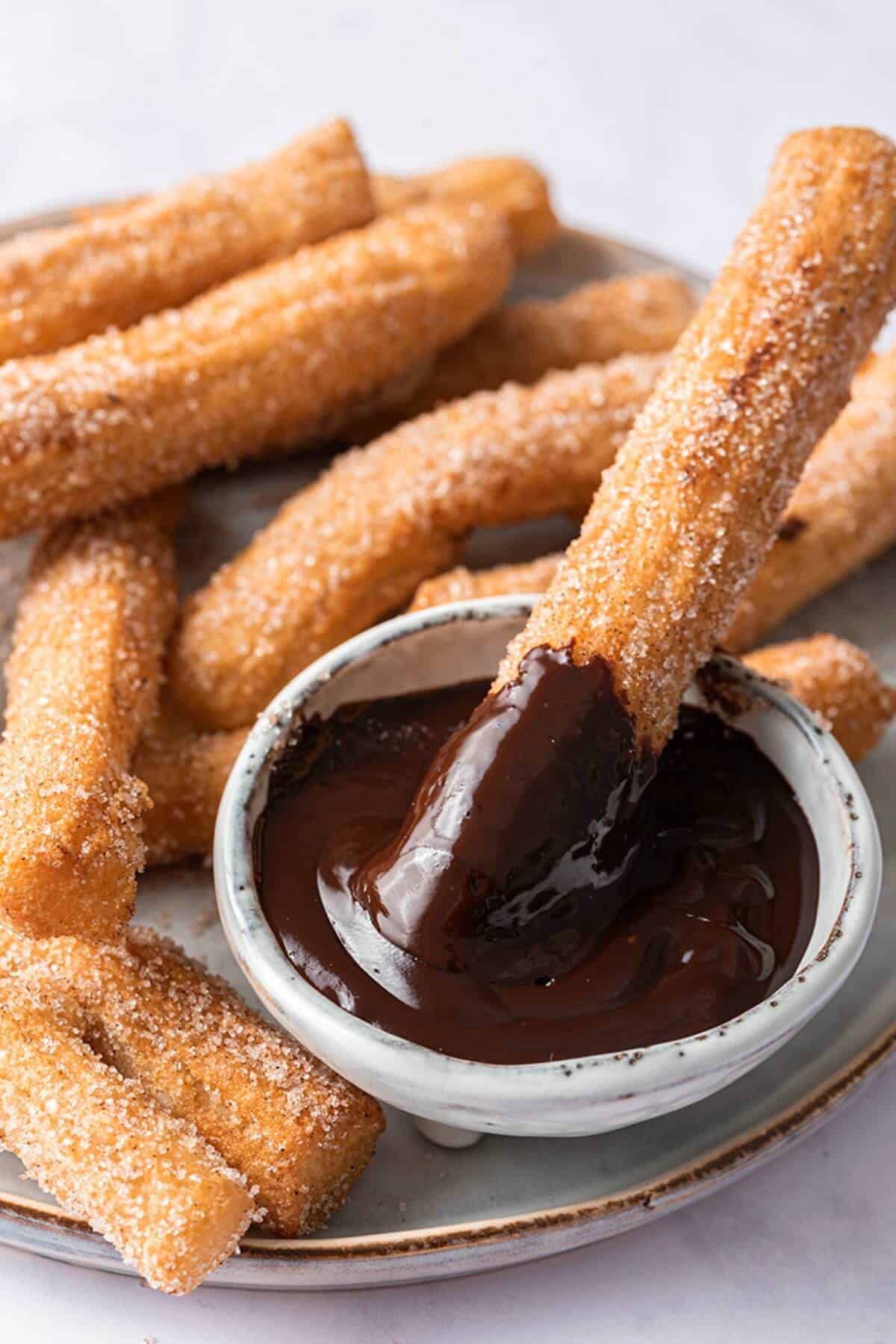 When it comes to childhood dessert favorites, churros were ALWAYS my number one.

As much as I love ice cream and gelato, if I ever saw churros somewhere, my heart would be set on them.

I always associated churros with something you’d get at a fair or Disneyland (yes, I went there). However, I soon realized just how easy they were to make at home and use no crazy ingredients!

Many popular churros recipes call for eggs and yeast to achieve the doughy and fluffy texture, but I REFUSE to do that.

Seriously, who said eggs and yeast are mandatory for churros? No thanks… I’ll stick to my vegan and dairy free version here.

What is a churro?

For those who aren’t familiar with churros, they are snacks made of fried dough, covered in cinnamon and sugar. While they have similarities to donuts, the texture is crispier on the outside, and not as doughy on the inside. They are most often served with a chocolate dipping sauce.

Churros have a sweet and light cinnamon flavor, without being overpowering. Originally of Spanish origin, they are now a popular dessert in many western countries!

Here are the ingredients you’ll need to make these vegan and gluten free churros. Please avoid substituting out ingredients unless otherwise stated.

For the warm chocolate sauce

How to make churros?

Start by preparing your churros dough. In a small saucepan, add your oil, sugar, and water, and bring to the boil. Once boiling, remove from the heat and gently fold through the flour. Continue mixing until a thick dough remains, before transferring to a large piping bag fitted with a star tip.

Heat 1-2 inches of oil in a deep pot or saucepan. Test the oil is hot by adding a drop of the batter into it and seeing if it sizzles. Once hot, carefully pipe the dough into the pan, around 4-5 inches in length. Pipe 3-4 churros per batch and fry each one until golden brown. Once each batch of churros is cooked, let them sit on some paper towel, to soak up excess oil. After 1-2 minutes, quickly dip each one in a mixture of cinnamon and sugar. Enjoy with warm chocolate sauce.

To make the chocolate sauce, heat up the coconut cream until warm. Once warm, add in your chocolate and let it sit for 5 minutes, before whisking together until thick and smooth. 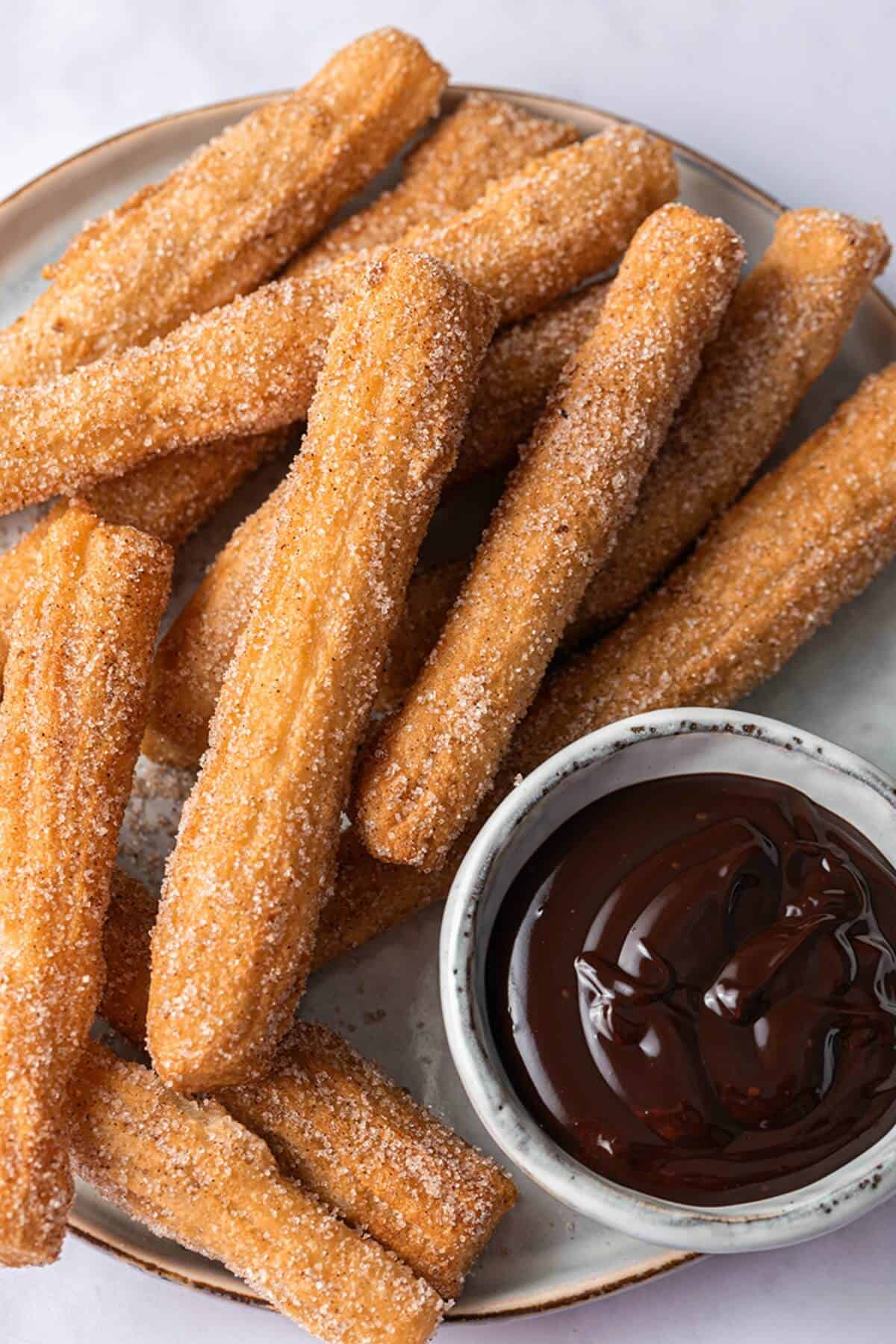 Can I bake these churros?

As these churros are made without eggs or milk, they can be quite chewy and dry when baked. I wasn’t a huge fan of the texture and the cinnamon and sugar mixture did not stick on very well.

If you’d like to bake them, I recommend you keep a firm eye on them and spray the churros with cooking spray, before covering with the cinnamon/sugar mix.

Can I make these sugar free?

Yes, if you’d like to make sugar free churros, simply swap out the sugar for monk fruit sweetener or erythritol.

Traditional churros contain eggs and heavy cream. However, in my homemade recipe, there is no dairy or animal based products, and are suitable for a vegan diet.

How do you store churros? 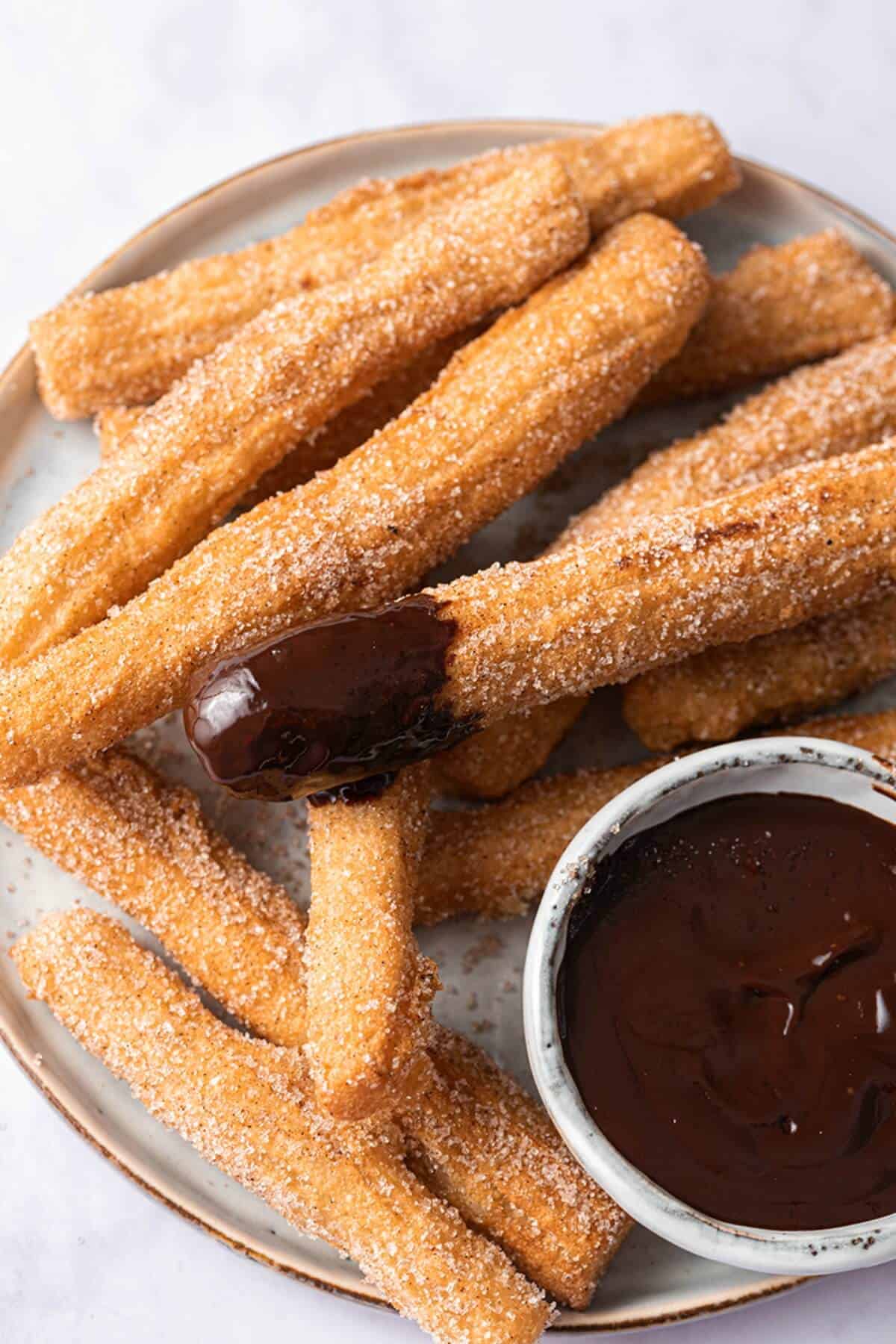 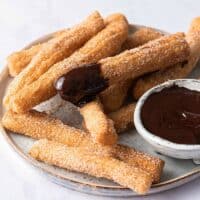 For the chocolate sauce

For the chocolate sauce

* White sugar or sugar free subs, like monk fruit sweetener or erythritol.  TO STORE: Leftover churros should be stored in the refrigerator, covered, for up to 2 weeks.  TO FREEZE: Place churros in a ziplock bag and store in the freezer for up to 6 months. Let them thaw overnight in the refrigerator.  TO REHEAT: Churros are best reheated in a non-stick pan or oven, to maintain crispiness.