This cinnamon swirl banana bread is super moist on the inside but topped with a gorgeous cinnamon CRUNCH! No butter, no eggs, and no grains needed, it’s healthy enough to have for breakfast!

I purposely buy an excess of bananas, so I have an excuse to make a banana bread with the overripe ones.

To change things up, I wanted to explore some different flavors. One of my favorite combinations is cinnamon and banana. Inspired by my almond flour banana bread and keto cinnamon bread, I combined the two to create this delicious loaf!

Why this cinnamon swirl banana bread recipe will have you mesmerized-

The texture ticks all the boxes too- It’s soft and moist in the middle, but has a lovely crunchy topping. It’s full of cinnamon flavor and has hints of banana, without being overpowering.

This is the kind of quick bread that can pass as both dessert or breakfast and takes minimal prep. I love baking two loaves at a time and freezing one to enjoy later down the track!

What goes into this recipe?

For the cinnamon swirl and crunch topping.

How do you make a cinnamon swirl banana bread?

Start by adding the dry ingredients into a large mixing bowl and whisk together. In a separate bowl, add the bananas, coconut oil, eggs (or prepared flax eggs) and vanilla extract. Combine the wet and dry ingredients and mix until combined.

Now, bake the bread for 45-55 minutes, or until a skewer comes out mostly clean. Remove the bread from the oven and let it cool completely, before slicing and serving.

Can I replace the almond flour?

This recipe has not been tested using an alternative flour. If you cannot tolerate almond flour, try a banana bread recipe made with coconut flour or all purpose flour.

Can I substitute the bananas?

You can substitute the banana for pumpkin puree or unsweetened applesauce. You will need to add some sweetener or maple syrup to compensate for the lack of sweetness.

Each slice of this bread yields less than 200 calories and is higher in fiber and protein that most banana bread recipes out there. 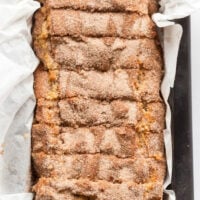 For the cinnamon filling and topping

* I used a brown sugar substitute.  TO STORE: Leftovers can be stored in the refrigerator, covered, for up to 7 days. TO FREEZE: Place slices of the bread in a ziplock bag and store it in the freezer for up to 6 months.