This coconut cheesecake is so rich, smooth, and creamy, you won’t believe it is keto! Made with simple ingredients, it’s an elegant dessert that is sure to impress! 3 grams net carbs per serving. 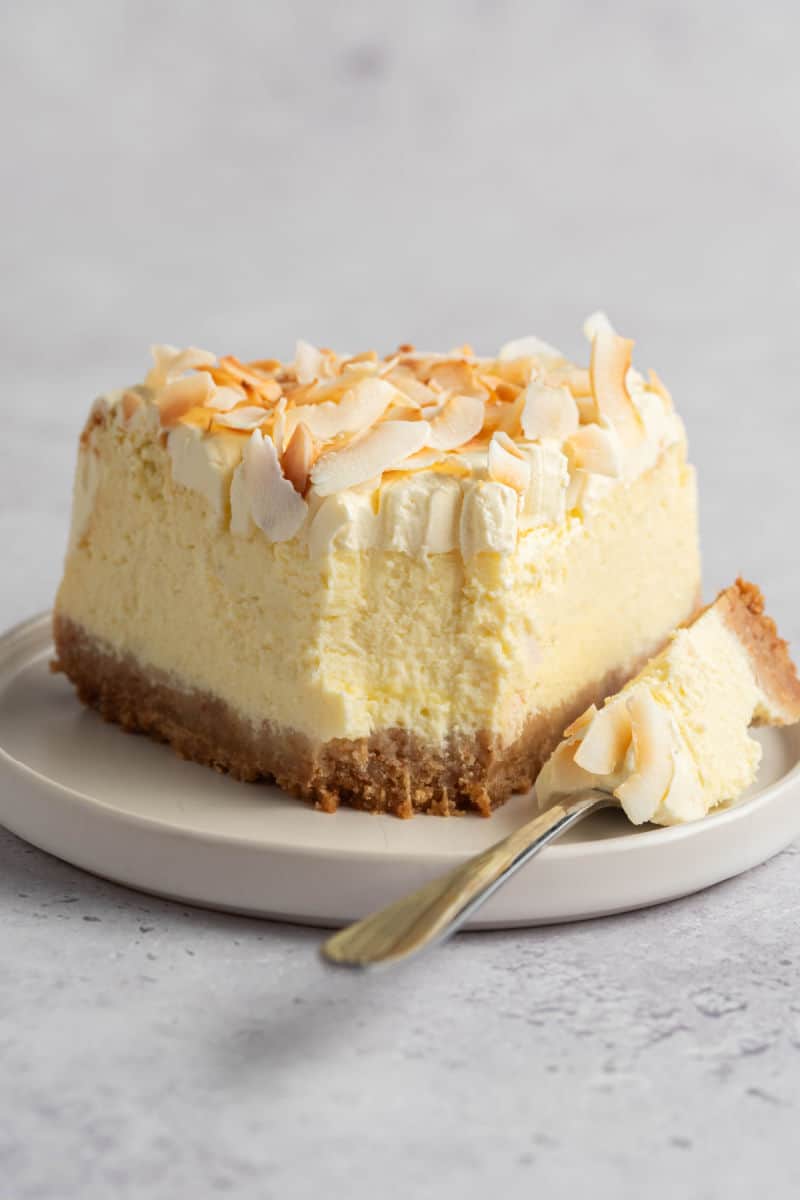 It’s no secret that one of my all time favorite desserts to make are cheesecakes. To me, they are the perfect dessert to make that will make everyone happy. It’s also easy to adapt and change up the flavors, and the possibilities are endless. Personally, I love making a cheesecake whenever friends come round for dinner or if I need to bring something to a barbecue or party.

Recently, one of my friends requested a coconut inspired cheesecake, as they love all things coconut AND are on a keto diet. As someone who loves a challenge, I agreed to it and was thrilled with the results. I tested it several more times before perfecting it and now I’m converted!

I’ve been meaning to share a coconut cheesecake recipe for quite some time. It uses simple ingredients and takes minutes to prep, but everyone ADORES it. Now, this cheesecake may look incredibly fancy, but I promise you anyone can make it!

No sugar and no grains are needed, but you’d never tell. The texture is extra smooth, rich, and creamy, and it’s topped with a fluffy frosting. It’s pleasantly sweet with a very subtle coconut flavor, without being overpowering.

I had some friends over for dinner the other night and served them this cheesecake for dessert and NO ONE believed me when I said that it was low carb- They thought I bought it from a bakery!

Ingredients to make a coconut cheesecake

For the no bake crust

How do you make a keto coconut cheesecake?

Start by preparing the crust. Mix together your crushed up cookies with the melted butter and transfer them into a 9-inch pie crust. Refrigerate the crust while you work on the filling. Next, add the cream cheese into a large mixing bowl and beat it for 3-4 minutes, until fluffy. Add the vanilla extract and sweetener and beat for another minute. Add the eggs in, one at a time, until completely combined. Finally, add the milk and sour cream and beat until smooth.

Now, pour the filling into the prepared crust and bake at 180C/350F for 90 minutes, until set and the tops are slightly brown. Remove the cheesecake from the oven before allowing it to cool completely. Once cooled, refrigerate for at least 4 hours. 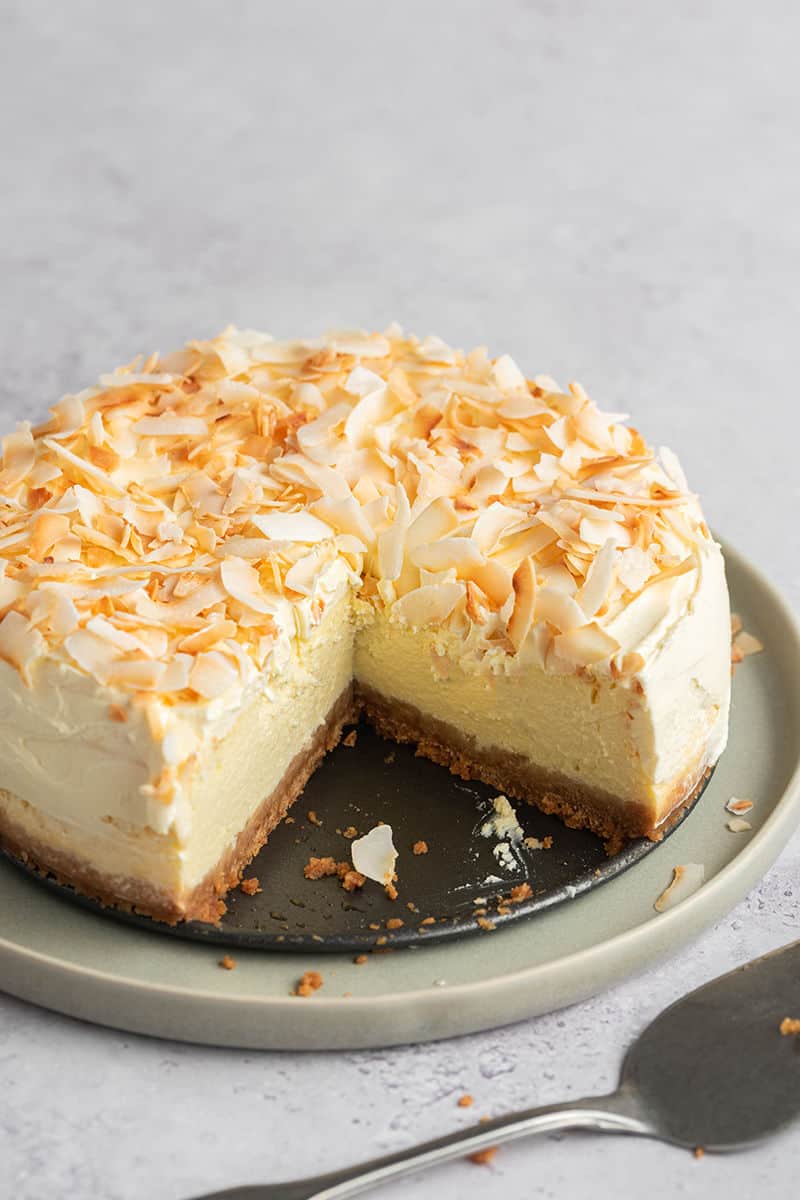 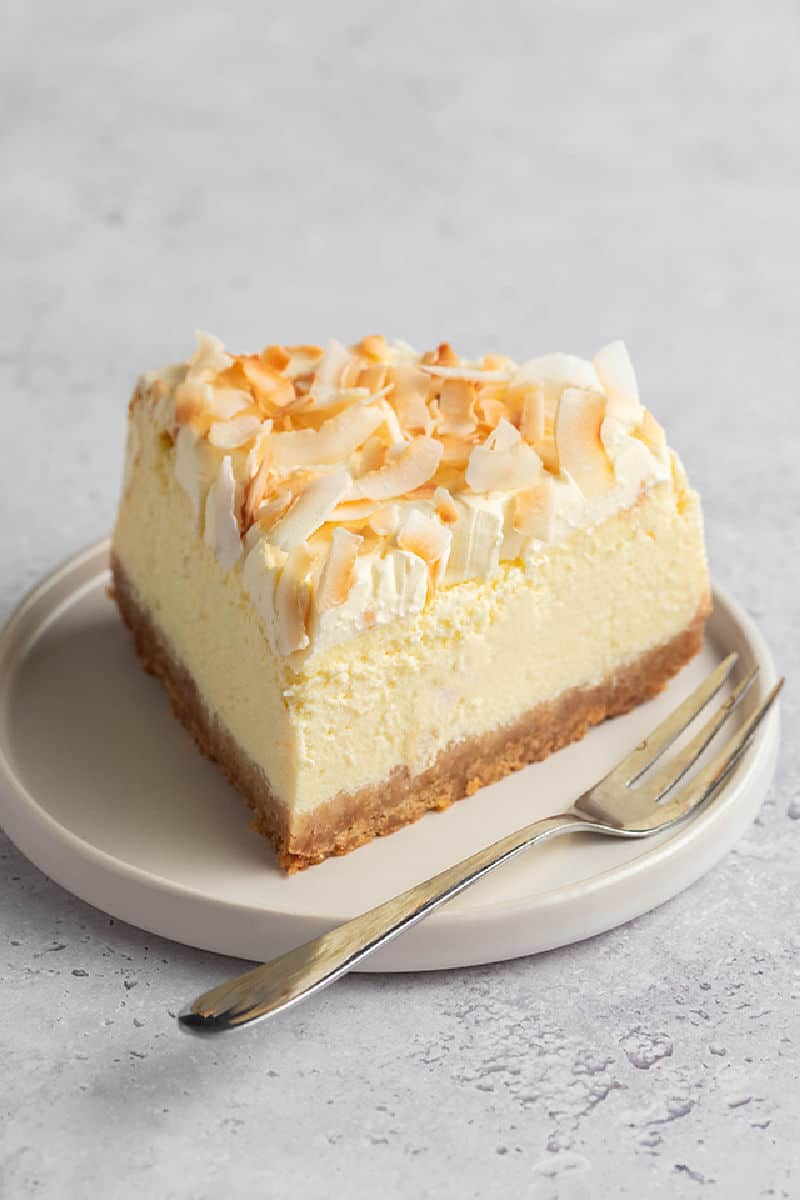 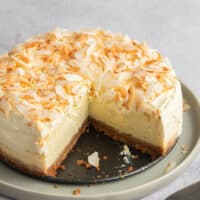 This coconut cheesecake is so rich and creamy, you won't believe it is keto! Made with simple ingredients, it's an elegant dessert that is sure to impress!
5 from 42 votes
Print Rate
Course: Dessert
Cuisine: American
Prep Time: 10 minutes
Cook Time: 20 minutes
Total Time: 30 minutes
Servings: 12 servings
Calories: 275kcal
Author: Arman

TO STORE: The coconut cheesecake should always be stored in the refrigerator, covered. It will keep fresh for up to 2 weeks. TO FREEZE: Place slices of the cheesecake in a shallow container and store them in the freezer for up to 6 months.