Friends, it is time for our friend who feasts on fruit to take center stage! I think Nat was thinking I was joking when I said I’d make it my mission for her to share savory recipes on here. Well, if you go through the last few posts, you’ll know that it is still going on strong.

Let’s rewind for a second to this post where I made fun of nuggets for having a hard-to-take-seriously name. Because when it comes to juvenile names, nuggets have nothing on the tot. It’s a palindrome. It’s hard to say with much (if any) dignity. And when you add “tater” in front of it it’s not even proper English. But luckily tastebuds don’t care about titles as long as the flavor = yum.

The sweet potato center of these little oblong orange bites is so simple that sorting out the crispy brown exterior was the trickiest part of getting this recipe right. Although there is one little surprise waiting for you when you bite in that is not sweet potato or seasoning or something you saw coming (unless you read the title, obviously). Oh hey there shredded zucchini! 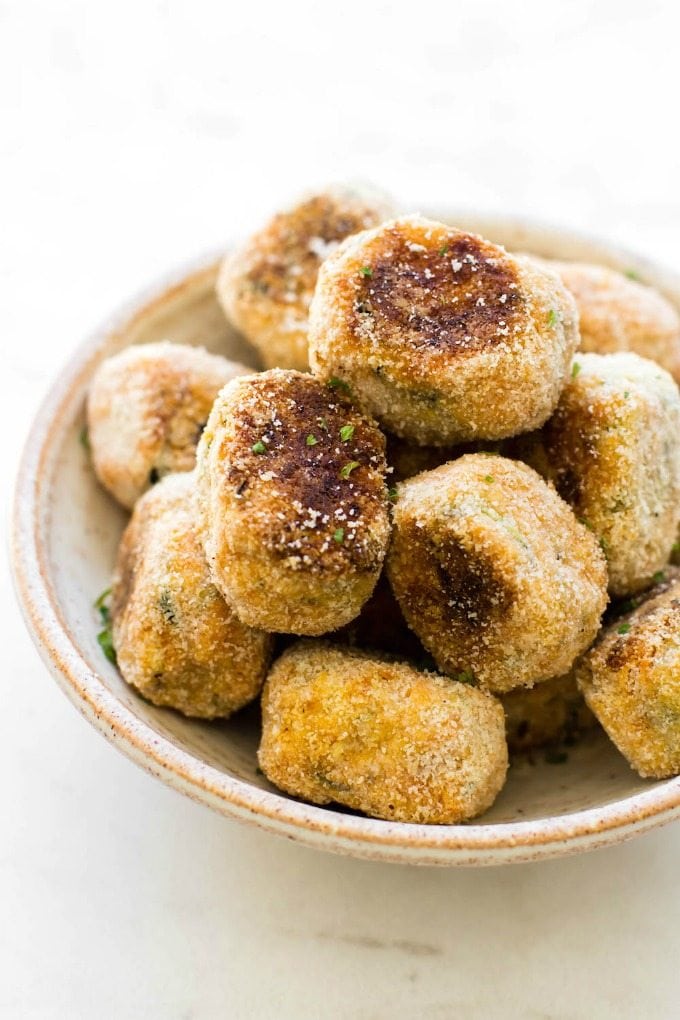 Cauliflower in my milkshake, carrots in my breakfast, zucchini in my brownies–I’m good with all of the above situations. (Btw those are my personal pick for most irresistible brownie of all TBMW brownies so far, and that is coming from someone who has tasted much of Arman’s brownie archives…a.k.a. I have brownie cred.)

If someone were to hand me a celery cupcake I’d probably give it a little skeptical nibble even. Because when an opportunity arises to squeeze veggies into more-fun-than-salad place, I take it! As long as squeezin’ in the unexpected plant foods doesn’t mean sacrificing flavor, of course. And if you pick your plant food wisely and plan your veg to other stuff ratio accordingly, it won’t. 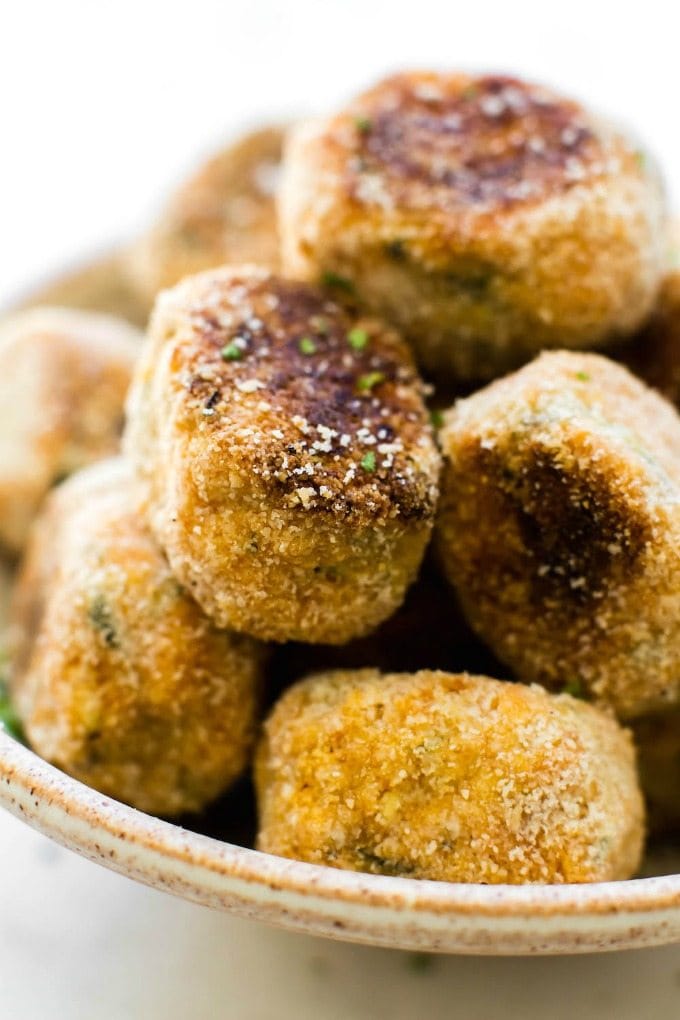 So mingling amidst the soft sweet potato center is a little extra dose of green for your day. Honestly at about two tots in I didn’t even notice the zucchini anymore, but maybe that’s because I was too busy reveling in the toastydelicious crumbly coating.

This coating. The in-my-head plan did not match up with the in-real-life or in-real-the-oven plan for the coating. The initial strategy was a coconut flour version, a regular flour version, and some sort of cinematic split screen video segment to show both. I considered mixing the flours into the sweet potato instead of going the coating route, but textural contrast is important to me. So for the first batch, I had all my little oven-bound tots lined up on a pan—one row coated in coconut flour and one row in all-purpose. But there was space for a third row and extra of the orange stuff, so on a whim I decided to toss a few in almond flour. Just for fun, ya know? 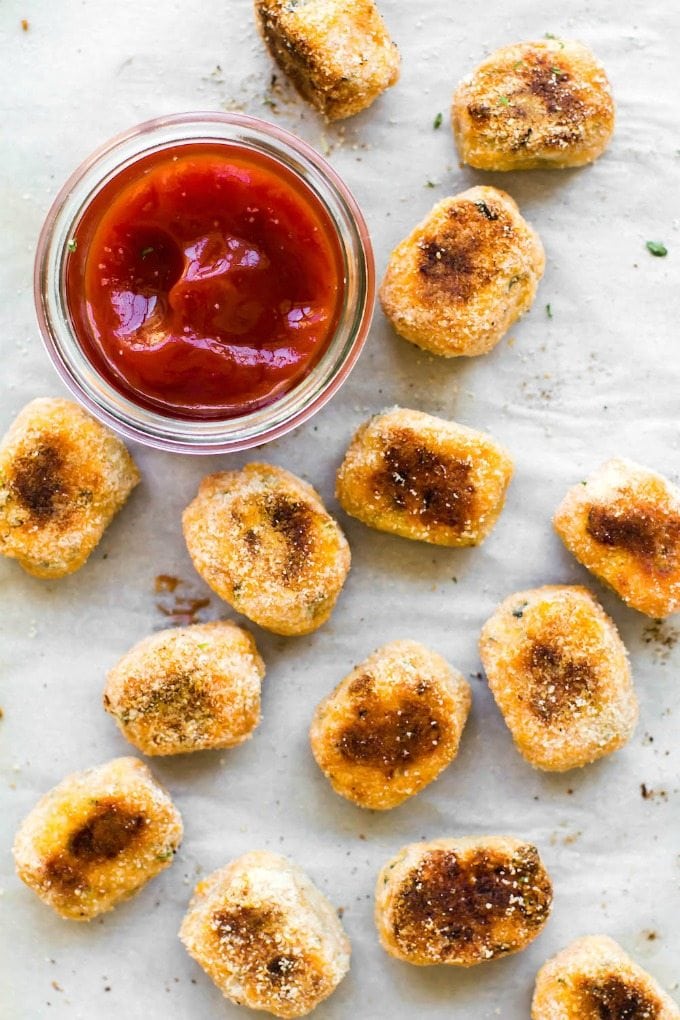 Well just for fun turned into thank goodness I tried this because these are SO much better than the rest! And to think, we may have never known. The almond flour version baked up to be the hands-down winner. Coconut flour was too soft. Regular flour was too floury. But almond flour was juuuuuuust right. Goldilocks and the Three Sweet Potato Tots—coming to bookstores never.


After I knew almond flour was my go-to guy for the coating, I wanted to hone in and find the optimal temperature and cook time for color and texture. As I suspected, higher temperature (400F) and longer cook time (almost 40 minutes) made the almond coating even more crispy, crumbly, and perfect in contrast to the soft middle. And a few minutes on broil at the end didn’t hurt either, especially for golden color purposes. Broil or not, be sure to eat them while they are still warm though, that crispiness won’t last forever. 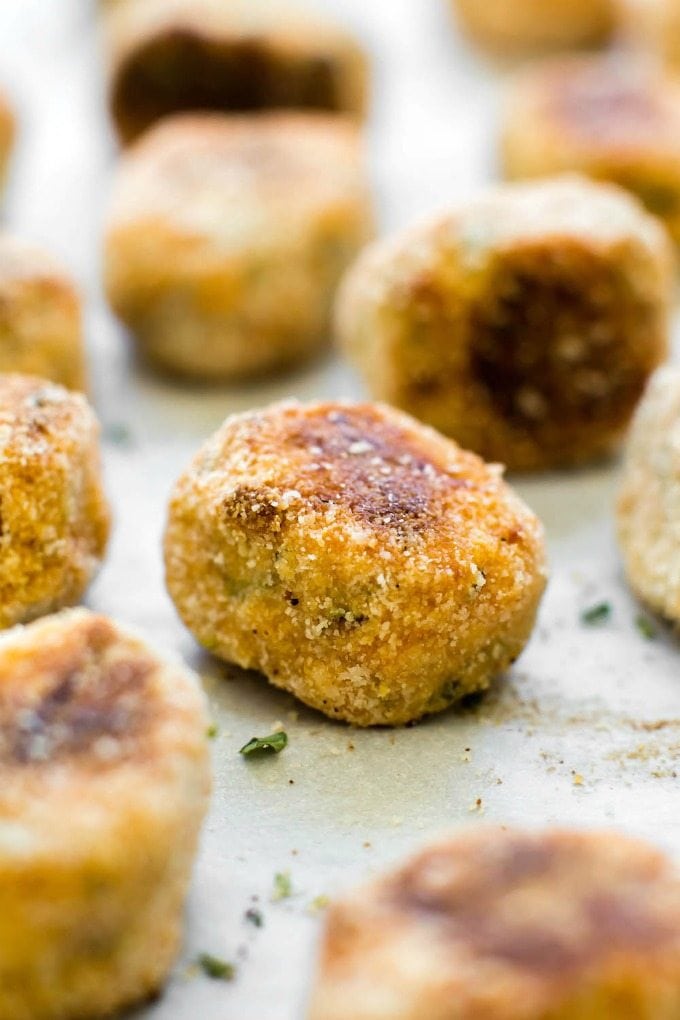 Tasty and toasty and gloriously textured, just like a tater tot breading should be. Well except minus the actual bread bit. And since we already threw dignity out the window, I for one am breaking out the ketchup! 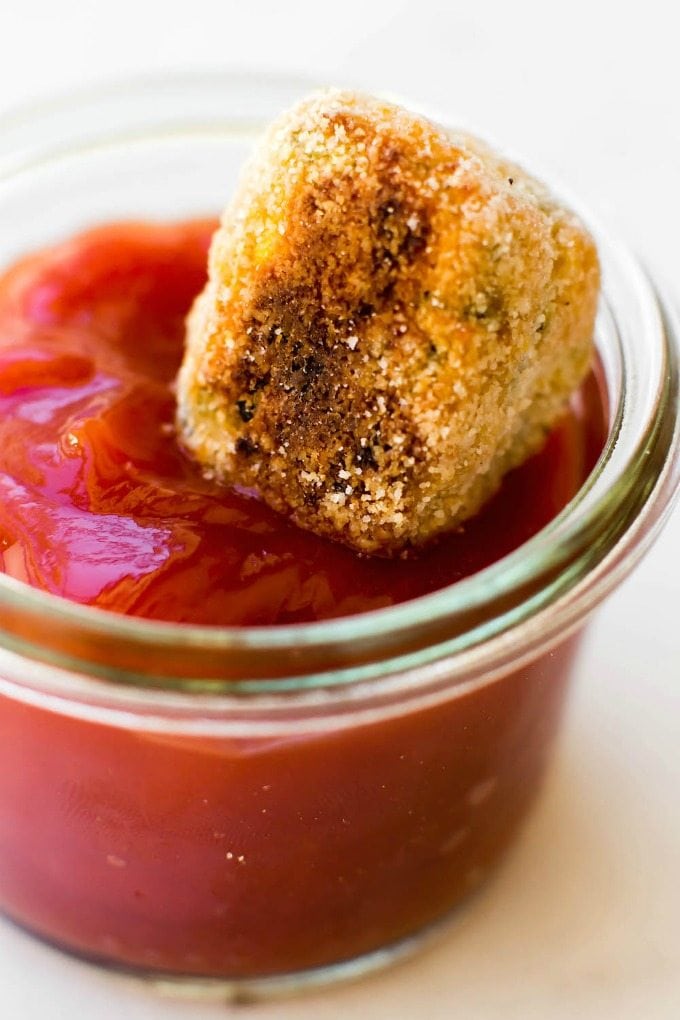 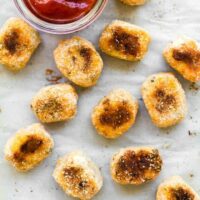