This McPlant burger recipe is a copycat of the brand new vegan and vegetarian burger offered at select McDonald’s stores! A vegan burger filled with all the classic McDonald’s burger trimmings, this homemade version is SO much better!

When it comes to making copycat vegan versions of popular foods, my favorite recipes to make are Levain bakery cookies, Subway cookies, and this McPlant burger.

The World has been begging for more vegan and plant based fast food options and the people have been heard. For the longest of times, Burger King’s Impossible Whopper was the only easily accessible vegan fast food burger. That is, until McDonald’s finally brought out their own offering- The McPlant burger.

What is a McPlant burger?

The McPlant burger is the first vegan burger offered by the popular fast-food chain, McDonald’s. It is most similar to a quarter pounder, with the beef burger patty using Beyond Meat (a vegan ground beef substitute), vegan cheese, and vegan mayonnaise.

Now, as I don’t live in the UK, I had several friends try the burger for me and give me a breakdown of both the taste, texture, and overall flavor. After hearing some mixed reviews, I’ve gone and re-created this new plant based burger but made it so much better.

This homemade McPlant burger recipe is so much better than the original. It uses fewer ingredients and you can assemble an entire burger in less than 10 minutes.

The vegan beef burger patty you get from McDonald’s includes several kinds of protein and oils, including coconut oil. In our homemade version, we mix the vegan ground beef with simple seasonings and two secret ingredients– ketchup and oil. The ketchup enhances the overall flavor and the oil keeps them extra juicy.

What I love about the homemade version is just how much more accessible and affordable it is, coupled with just how much it tastes like an actual Quarter pounder burger. I had some friends over for a barbecue the other day and served them these burgers and NO ONE could tell they weren’t made with meat- They thought it tasted exactly like a burger from McDonald’s.

What you’ll need to make this copycat recipe

For the burger patty

To assemble the burger

How do you make a McPlant burger?

Start by preparing the patties. In a large mixing bowl, combine the Beyond Meat ground with other burger patty ingredients and mix well. Using your hands, divide the mixture into four portions and shape it into patties.

Next, add some oil into a non-stick pan and place it over medium heat. Once hot, add the four patties and cook them, covered, for 8 minutes, flipping halfway through.

Now, assemble the burgers. Lightly toast your brioche buns. Add a burger patty onto the bottom of each bun, then add a slice of vegan cheese, followed by the tomato, lettuce, and pickles. On the top side of the buns, spread the vegan mayonnaise, ketchup, and mustard, and sprinkle some of the diced onion, before placing it on top of the rest of the burger.

These storage tips are for the patties only, not the assembled burgers themselves. Like any good burger, you should always assemble them fresh.

What to serve with McPlant burgers

How many calories are in a McPlant burger?

The UK version of the McPlant burger has 429 calories. The American version uses different ingredients in their condiments and burger fillings so their nutritional information will differ.

Is the McPlant nice?

Based on a plethora of reviews, the McPlant burger gets an overall decent rating, however, most consumers argue the patty is lacking in flavor.

Is the McPlant vegan? 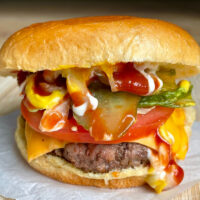 For the burger patties

Assembled burgers should not be refrigerated or frozen, or else they will become soggy.  * Beyond meat ground is what is used in McDonald’s McPlant burgers and what we used for this recipe. Other vegan ground beef substitutes will also work.  TO STORE: Leftover McPlant burger patties can be stored in the refrigerator, covered, for up to 3 days. TO REHEAT: Place cooked and cooled patties in a ziplock bag and store them in the freezer for up to 6 months.