This eggplant pizza may be low in carbs, but it’s loaded with flavor. Ready in minutes, it’s healthy, delicious, and comes together in no time!

Pizza is hard to resist for anyone.

Seriously, if it could be its own food group, I would be a big advocate of it.

As someone who loves a good pizza, I open to trying it out in fun and creative ways. These include making it crustless, using cauliflower as a base, or even cutting the carbs completely.

For something different, I love to swap out a standard crust for an eggplant crust.

What we love about this recipe is that it is a fantastic way to use up plenty of eggplant. I mean, eggplant can be tricky to work with, but using it as a crust has been a game changer!

There are just 5 key ingredients to make this recipe. Like any good pizza, you can customize it any way you like. Here is everything you’ll need:

How to make eggplant pizza?

Simple is an understatement for making this recipe. Besides some very minor prep with the eggplant, all you do is sauce it, top it and then bake it until the cheese has melted. Easy peasy!

Start by slicing the eggplant lengthways, around 1/3 inch in thickness. Rub some olive oil on both sides of the eggplant slices and place them on a lined baking sheet and sprinkle with salt and pepper.

Next, bake eggplant for 12-15 minutes, or until soft in the middle.

Now, spread a layer of pizza sauce on the eggplant rounds, then sprinkle some cheese. Add your toppings of choice, then add more cheese.

Finally, turn the oven to a broil setting and broil the eggplant pizzas for 5-10 minutes, or until the cheese melts.

Is eggplant good on a low carb diet?

Eggplant is a fantastic low carb vegetable as it contains very few carbs. Per one cup serving, there are just 3 grams of net carbs. Besides being deficient in carbs, it provides you with fibers, vitamins, and minerals that are good for your health.

Using it as a pizza base works well, as it doesn’t have anywhere near as many carbs as a crust made with dough contains.

Some other low carb eggplant recipes include eggplant lasagna and eggplant parmesan.

Like a traditional pizza, the beauty of this one is just how easy it is to customize. Here are some ideas to get you started:

What is the best way to store leftovers? Here are best practices for eggplant pizza storage:

To store: Leftovers can be stored in the refrigerator, covered, for up to five days.

To freeze: Place the baked and cooled pizzas in a shallow container and store it in the freezer for up to 2 months.

Reheating: Always reheat the pizza in a preheated oven until the cheese is bubbling.

Do you have to soak eggplant before baking?

Yes, soak the eggplant before baking to avoid a bitter flavor and want a creamy texture.

How do you bake eggplant without it getting soggy?

You can add salt over the sliced eggplant to remove moisture from the vegetable and prevent it from being soggy.

Is this keto friendly?

There are just 4 grams net carbs per eggplant pizza, making it a fantastic keto dinner idea.

What to serve with this dish?

Fresh vegetables or salads are always a winner, otherwise keep it classic with some garlic bread. 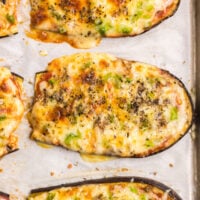 TO STORE: You can store leftovers in air-tight containers in the refrigerator for up to 3 days.  TO FREEZE: Use freezer-safe airtight bags or containers to freeze eggplant pizza for up to 3 months. TO REHEAT: Always reheat the pizza in a preheated oven.