This 3-ingredient ham glaze adds the most perfect sticky exterior! Sweet, salty, and full of flavor, it takes your roast to another level!

How to spruce up your roast ham? Add a fabulous ham glaze made with just 3 ingredients.

During the festive season or when we are in the mood for a roast, we always whip up this special glaze every single time. It’s easy to assemble and stick to the pork perfectly.

A combination of fruit juice and brown sugar balances out the natural saltiness of the ham, and you’ll be reaching for seconds and thirds in no time.

What we love most about this ham is that you can use it for other cuts of meat too: lamb, beef, or even a chicken.

Oh, and if you like a simple marinade, try this 4 ingredient chicken marinade: it also works well for pork.

How to make a 3-ingredient ham glaze

This 3 ingredient ham glaze is simple to make: just be sure to use it on a pre-cooked ham, or else it will seep into the meat once it roasts! Here’s the basic idea for making the glaze and using it on your ham (or see the recipe below for specifics):

We love this glaze as it is, but sometimes to switch it up, we try one of these ways below:

Recipes to try this glaze on

Did you know this glaze works well on other protein, too? Here’s some favorites that we have tried:

Do you glaze ham before or after cooking?

Can I glaze a cold ham?

You can glaze a cold ham provided it is pre-cooked.

What thickens glaze for ham?

If your glaze is too thin, add extra brown sugar or honey or thicken it. 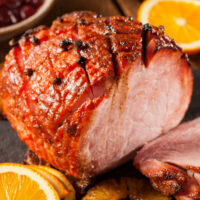