This keto blueberry cheesecake is a creamy, low carb cheesecake that is full of plenty of blueberries and topped with a simple blueberry sauce. A showstopping dessert that looks impressive, but ridiculously easy to make! 2 grams net carbs per slice. 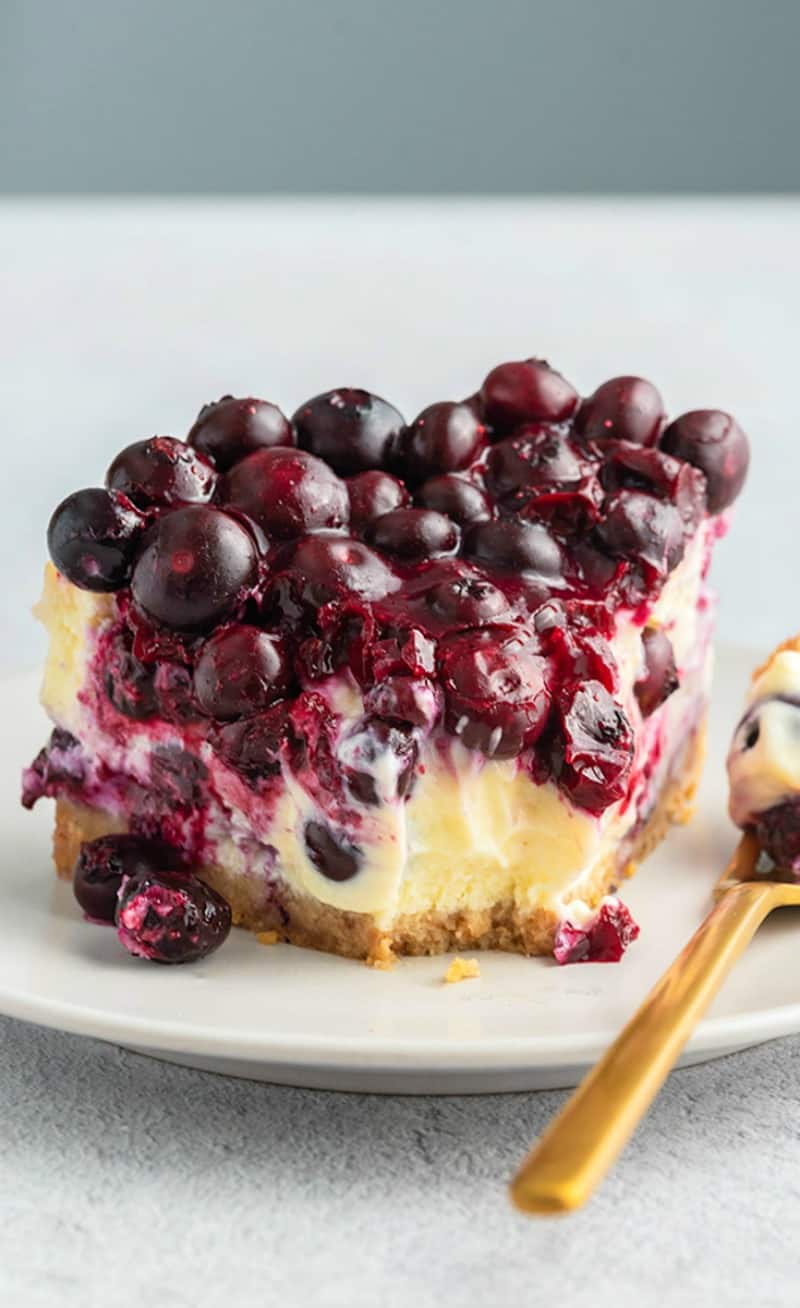 Whenever I host friends or family for dinner, it’s my mission to end the meal with a show stopping dessert. In the past, I’d stick to a fancy chocolate cake or a twist on some brownies, but recently, I’ve been making cheesecake.

I’ve been meaning to share a blueberry cheesecake for quite some time now. Two of my friends are OBSESSED with blueberry desserts and with one of them turning the big 30 soon, I wanted to do something special and make their favorite dessert for them.

Now, this cheesecake may look incredibly fancy, but I promise you it is SO easy to make and requires just a handful of ingredients.

No grains, no sugar and no nuts are needed, but you’d never be able to tell. The texture is smooth, rich, and creamy, bursting with juicy blueberries. It’s slightly tangy, sweet, and the blueberries are not overpowering!

I served this for said friend’s birthday dinner the other day, and NO ONE believed me when I said it was keto and low carb- they thought it tasted just as good, if not better than any good cheesecake out there! 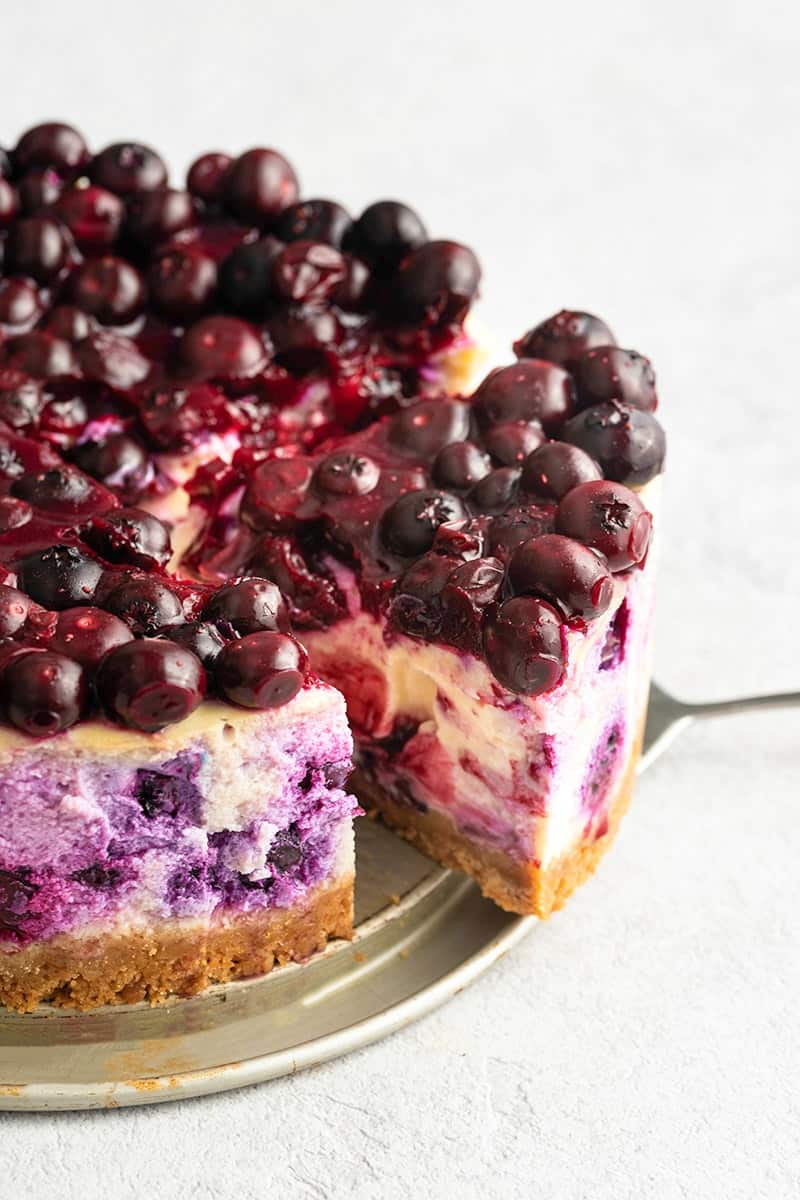 Ingredients for a blueberry cheesecake

Here is what you’ll need to make this low carb blueberry cheesecake. Please ensure that your dairy and eggs are all room temperature and that you avoid substituting out any of the ingredients. 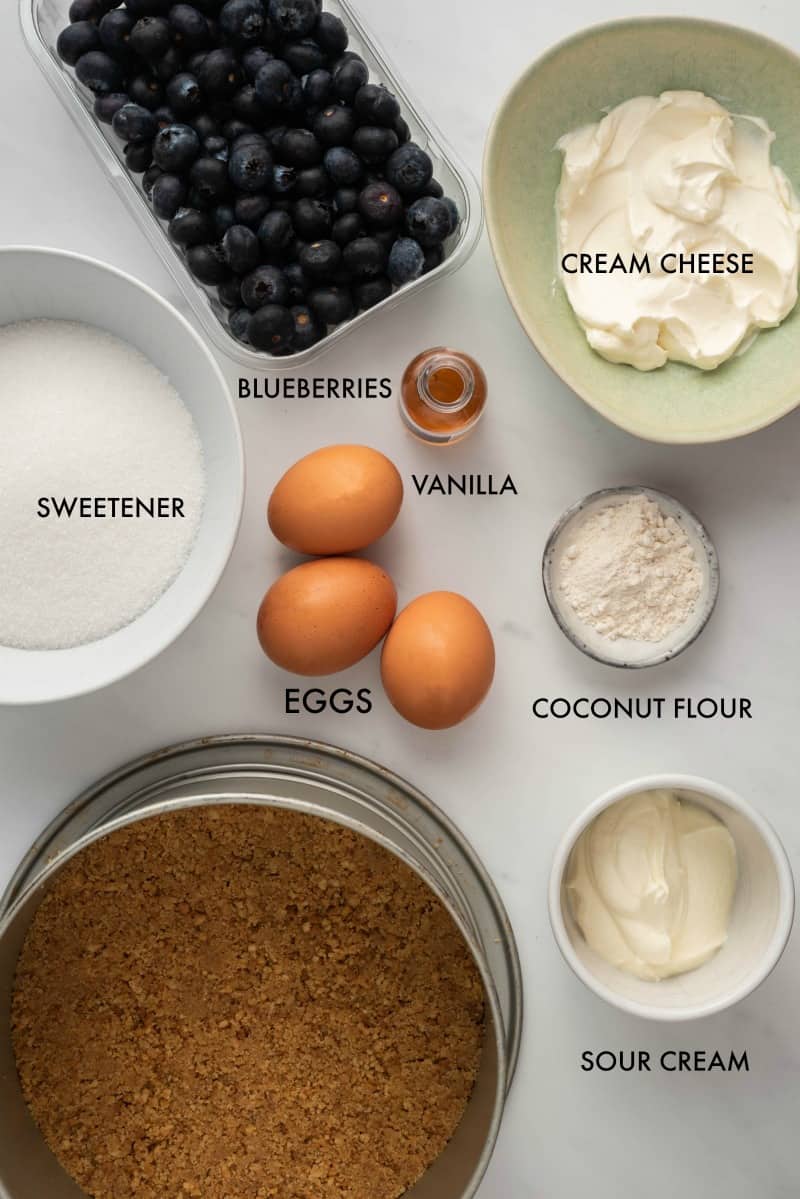 How to make a keto cheesecake with blueberries

To start, lightly beat the cream cheese until smooth. Add the sour cream, vanilla extract, sweetener, and almond flour, until combined. Add the eggs in, one at a time, and beat into the mixture until just combined. Finally, fold through the blueberries using a rubber spatula.

Next, transfer the cheesecake filling into the prepared pie crust and bake for 70 minutes, or until the tops are set, but the mixture jiggles slightly when touched. Allow the cheesecake to cool completely, before refrigerating it for at least 4 hours, or overnight.

When the cheesecake has been refrigerated for at least 4 hours, you can prepare the blueberry topping. Toss the blueberries in the coconut flour and place it in a small saucepan. Add the water/syrup and heat on low heat, until it begins to simmer and thicken. Pour the topping over the chilled cheesecake and refrigerate for a further 2 hours. 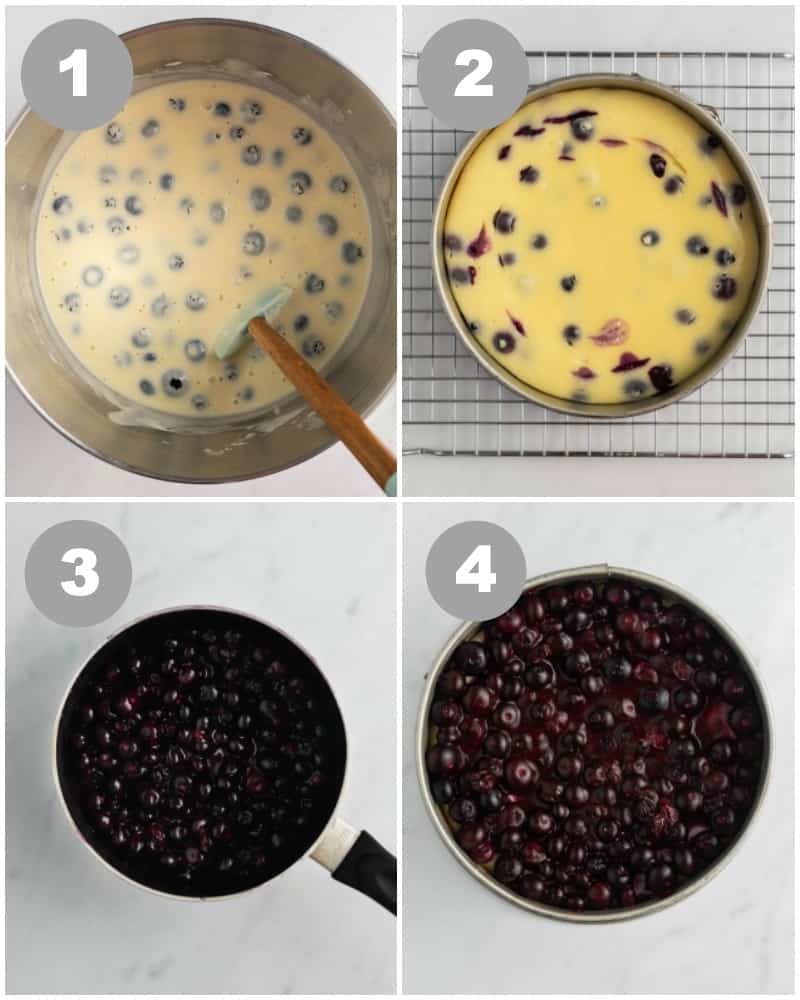 Many grocery stores and supermarkets are now stocking pre-made low carb pie crusts. However, you can easily make your own at home. I’ve already shared a coconut flour pie crust, but for a cheesecake, I love using this almond flour crust.

Mix all your ingredients together until a crumbly texture remains. Transfer it into an 8-inch pie pan or glass dish. Bake the crust at 180C/350F for 10 minutes, before cooling completely and adding the cheesecake filling.

Is this a no carb cheesecake?

While this cheesecake is super low in carbs, it is not carb free.

Each slice yields a mere 2 grams net carbs. If you’d like to reduce the carbs even further, omit the blueberry topping and instead, serve with whipped cream or whipped coconut cream.

Can I make this without eggs?

I tried this recipe using dairy free cream cheese and while that worked perfectly well, it didn’t turn out at all when replacing the eggs with egg substitutes.

If you’d like an eggless cheesecake, you can make this cheesecake and simply add the blueberry topping over it.

Blueberries are one of the few fruits that are allowed on a keto diet and a fantastic low carb fruit to enjoy regularly.

Per cup serving (100 grams) they yield a mere 60 calories and 3 grams net carbs. 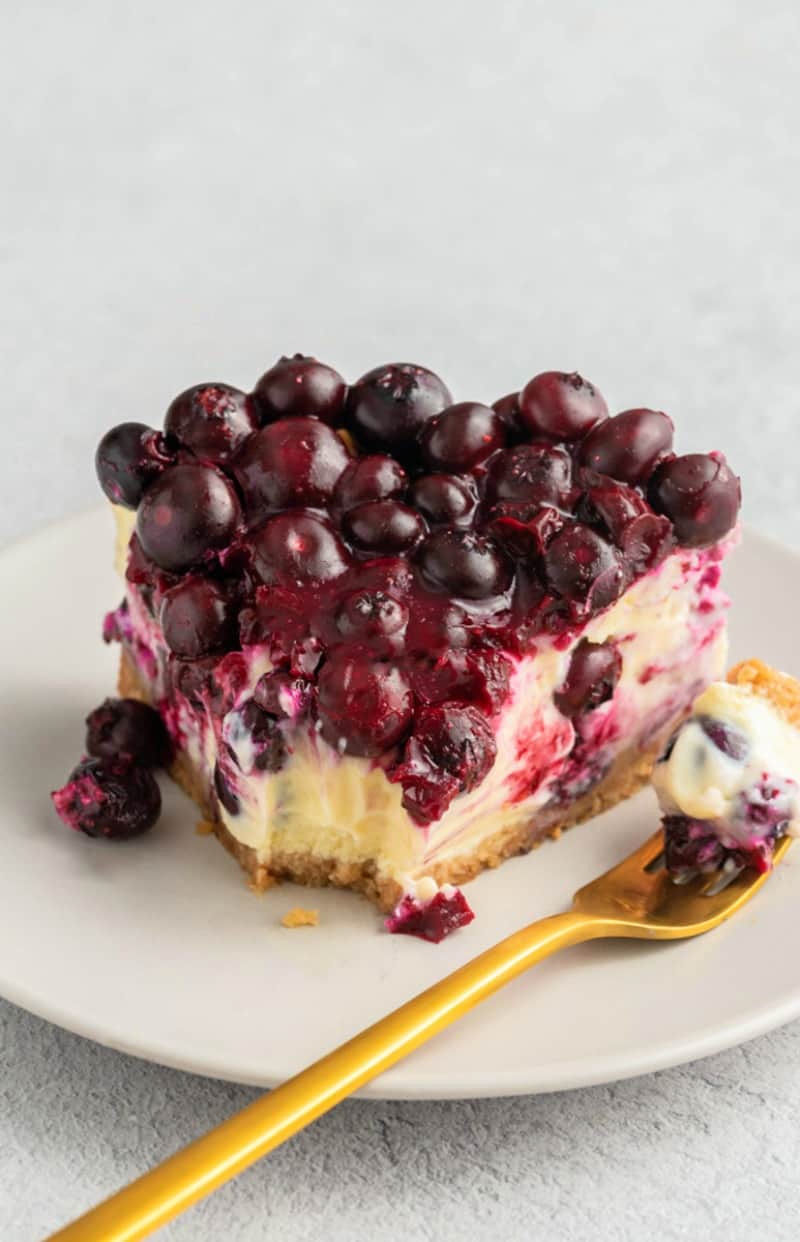 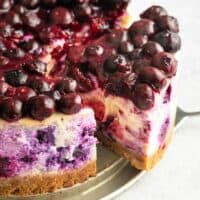 For the blueberry topping

To make the blueberry topping

* I used an almond flour pie crust written out in the post.  ** Place erythritol or monk fruit sweetener in a blender and pulse several times, to produce a superfine texture. TO STORE: Blueberry cheesecake must always be stored in the refrigerator, as it contains dairy and softens at room temperature. Keep it covered, completely, or in a sealable container. Cheesecake will remain fresh for up to 1 week. TO FREEZE: Place slicers of cheesecake in a sealable container and store in the freezer for up to 6 months. Thaw at room temperature for several hours, before serving.