These keto stuffed peppers are a quick, easy, and healthy dinner recipe that comes together in less than 20 minutes! Filled with ground beef, cauliflower rice, and topped with melted cheese, everyone will beg for seconds!

When it comes to keto ground beef recipes, my favorites to make are meatballs, meatloaf, and these easy stuffed peppers.

Are peppers okay on keto?

Bell peppers are a fantastic keto friendly vegetable to include on a low carb diet. Per 1 cup serving (150 grams) yields a mere 38 calories, 5 grams of fiber, and a mere 3 grams net carbs.

There are some who say the colors change the carb count, but they are incredibly negligible. Regardless, the bell peppers play a star role in these stuffed peppers!

These keto stuffed peppers recipe is one you’ll make on a weekly basis. Tender and juicy peppers filled with a Mexican-inspired beef and cauliflower mixture, topped with plenty of cheese. It’s the kind of dinner that comes together in minutes and something the whole family will love, keto or not.

What I love about this recipe is just how customizable they are. You can literally fill the peppers with anything and everything. Whenever I have leftover spaghetti sauce or even alfredo sauce, I love adding it to some peppers, sprinkling some cheese, and voila- Instant dinner.

How do you make keto stuffed peppers?

Start by slicing the peppers in half and removing the stems and innards. Place them in a large baking dish and set them aside. Next, prepare the filling. Add the oil into a non-stick pan and add the ground beef and onion. Cook until the beef is no longer pink. Drain excess liquid then add the taco seasoning, followed by the canned tomatoes. Let it simmer for 1-2 minutes. Remove the pan from the heat and stir through the steamed cauliflower rice, along with half the shredded cheese.

Now, distribute the filling amongst the halved peppers and sprinkle the remaining cheese on top. Place the stuffed peppers in the oven and bake for 30-35 minutes until tender and the cheese has melted.

Easily make this dish in the air fryer or instant pot, if you own either of them.

What to serve with keto stuffed capsicums

This is the kind of dish that goes SO well with vegetable or low carb bread. My favorites include onion rings, keto French fries, coleslaw, cornbread, rolls, buns, and biscuits.

How many carbs are in keto stuffed peppers?

What color bell pepper is best for keto?

Green bell peppers have the lowest in carbs, then red peppers, then yellow ones. However, the difference is very minimal so use whichever you have on hand.

Should peppers be blanched before stuffing?

Bell peppers don’t need to be blanched before stuffing them. They naturally soften during the cooking process. 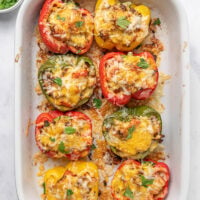 Air fryer and instant pot options are included in the post.  TO STORE: Leftovers should be stored in the refrigerator, completely covered, or in a sealed container. Some moisture will begin to form, but that can be removed when you reheat it. They will keep well for up to 5 days. TO FREEZE: Place cooled stuffed peppers in an airtight container and store them in the freezer for up to 6 months. TO REHEAT: Microwave them for 30-40 second spurts or reheat in a preheated oven until warm. TO MAKE AHEAD: Prepare everything as instructed then cover the baking dish with aluminum foil (tin foil). Place it in the freezer for up to 1 month. When ready to cook, remove from the oven and bring it to room temperature, then cook as instructed.