Make the best air fryer cinnamon rolls from scratch in just 8 minutes- No yeast needed, they are soft, fluffy, and loaded with a cream cheese frosting!

Can you ever have too many cinnamon rolls? I think not.

If I could award myself for how many unique ways to eat cinnamon rolls, I would. We’ve had a cinnamon roll for one, keto cinnamon rolls, and magic 2 ingredient dough ones. Now, we’ve adapted a bit of each one and made them in no time, thanks to the air fryer!

What I love about this recipe is just how versatile they are. Enjoy one for breakfast with a healthy smoothie or have one in the afternoon with a nitro cold brew– Your taste buds will thank you.

For the cream cheese frosting.

How to make cinnamon rolls in the air fryer

Start by mixing the flour and vanilla yogurt until a thick dough remains. Transfer the dough onto a lightly floured surface and knead several times until a smooth dough remains.

Next, roll the dough out into a large, rectangle shape. In a mixing bowl, whisk together the melted butter, brown sugar and cinnamon until combined. Using a spoon or spatula, spread the mixture on the dough, reserving 1/4 of an inch around the sides.

Now, beginning at the long end, tightly roll up the dough into a log shape. Using a sharp knife, slice the log into 8-9 equal pieces.

Finally, place the cinnamon rolls in an air fryer basket and air fry for 7-8 minutes, or until the dough is fully cooked. Remove them from the basket and place them on a plate or tray to cool down. Once cool, frost the tops of them and enjoy.

To make the frosting, beat together the cream cheese and butter until smooth. Slowly add in the powdered sugar until combined.

Can I use a pre-made dough?

Many similar recipes call for Pilsbury cinnamon roll dough, which can be made up in the air fryer too. If this is easier for you, this is how you’ll air fry them-

Why make cinnamon rolls in the air fryer?

Using the air fryer to make cinnamon rolls significantly reduces the cooking time, which is ideal if you’d like to have them as quick and easy breakfast.

Do I have to line the air fryer basket with parchment paper?

While unnecessary, I recommend lining the base of the air fryer basket with parchment paper to avoid excess crumbs or bits of batter seeping through. It also prevents it from sticking to the bottom of them.

How many calories are in air fried cinnamon rolls? 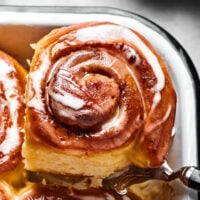 * Coconut sugar, white sugar, or a brown sugar substitute work.  ** Dairy free butter and cream cheese work. *** Or sugar free powdered sugar. TO STORE: Leftover air fried cinnamon rolls can be stored in the refrigerator, covered, for up to three days.  TO FREEZE: Place the rolls in an airtight container and store them in the freezer for up to two months.  TO REHEAT: Microwave the rolls for 20 seconds or reheat in the air fryer for 2-3 minutes.