The comforting taste and texture of French Toast in a delicious, healthy oatmeal form! This Apple Pie French toast oatmeal is quick, easy and can be prepped in advance and even be frozen and thawed for quick breakfasts which simply needs reheating! Naturally gluten free and high in protein, this also comes with a vegan option! 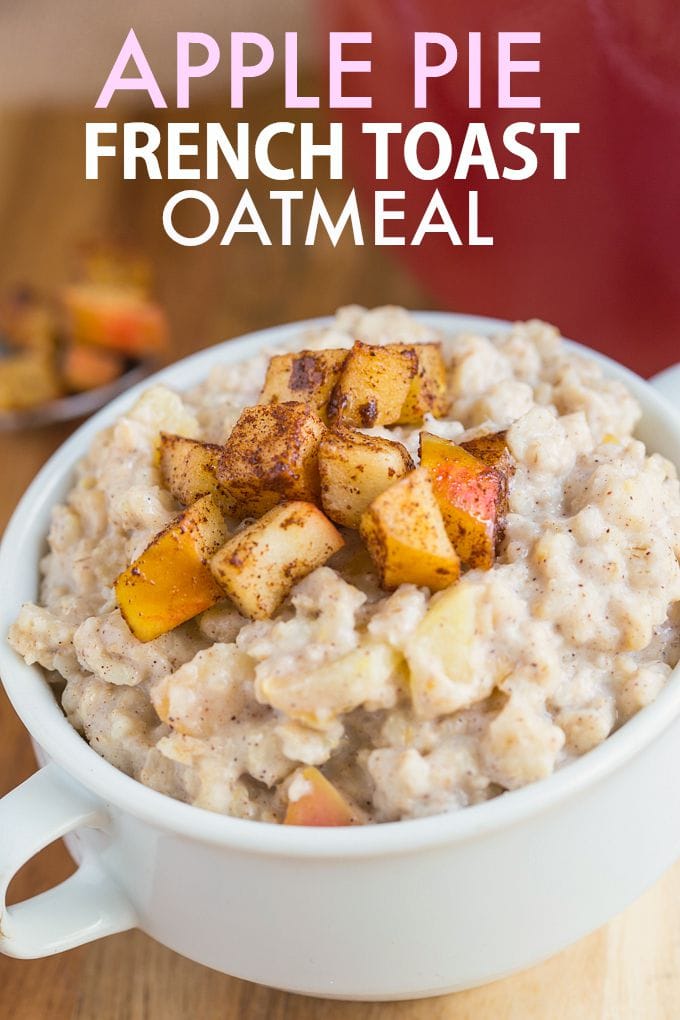 “Oh shut up, Arman. FALL. Stupid boy, it’s Autumn. You move to America and now you use American lingo.”

I really do have great friends back home. They are almost as complimentary as Niki. 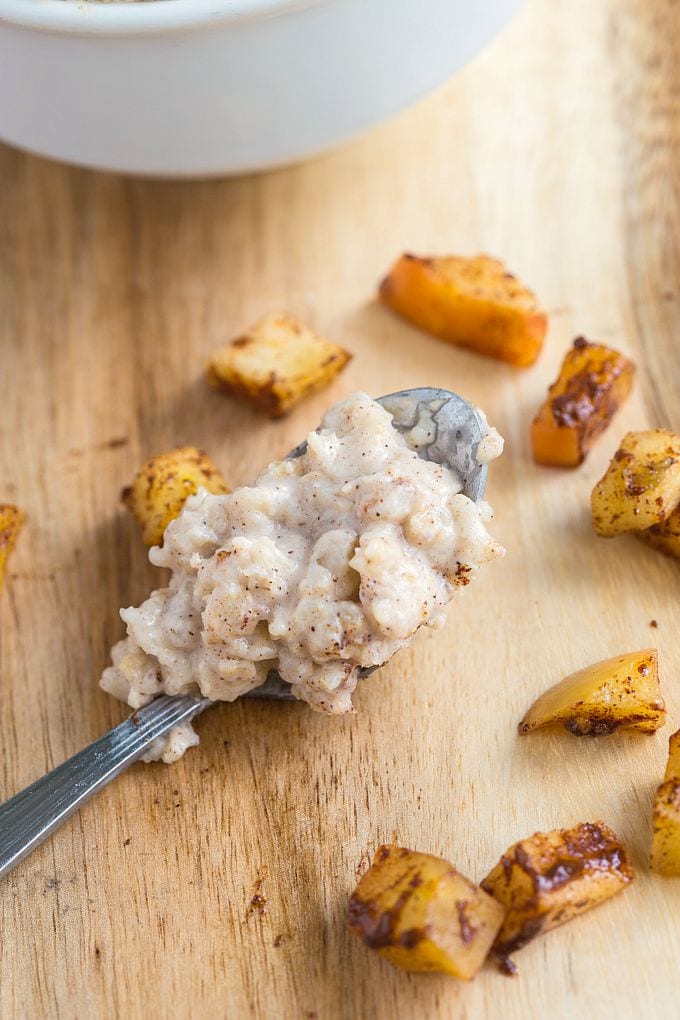 So I’m really excited to be experiencing ‘Fall’ here but also be creating recipes while being in season. Around this time last year, I had gotten more into my recipe development and creation for the blog which in turn meant two things-

1. Focusing on catering to my audience (a majority being in the Northern Hemisphere)

2. Whipping out my slow cooker while ice creams were being sold out in supermarkets around Australia.

While my friends may roll my eyes at me calling Autumn Fall, they certainly had no complaints when they came round for brunch- Something I really enjoyed doing in the colder months when outdoor patio brunching was more like punishment than enjoyment.

Long term readers from back in the early days of the blog may remember me sharing various ‘themed’ brunches I threw- A pancake bar, an oatmeal and a French toast one. The themes ended there because we all came to the conclusion that as long as there was something warm and maple syrup was on the table- It was a winner. 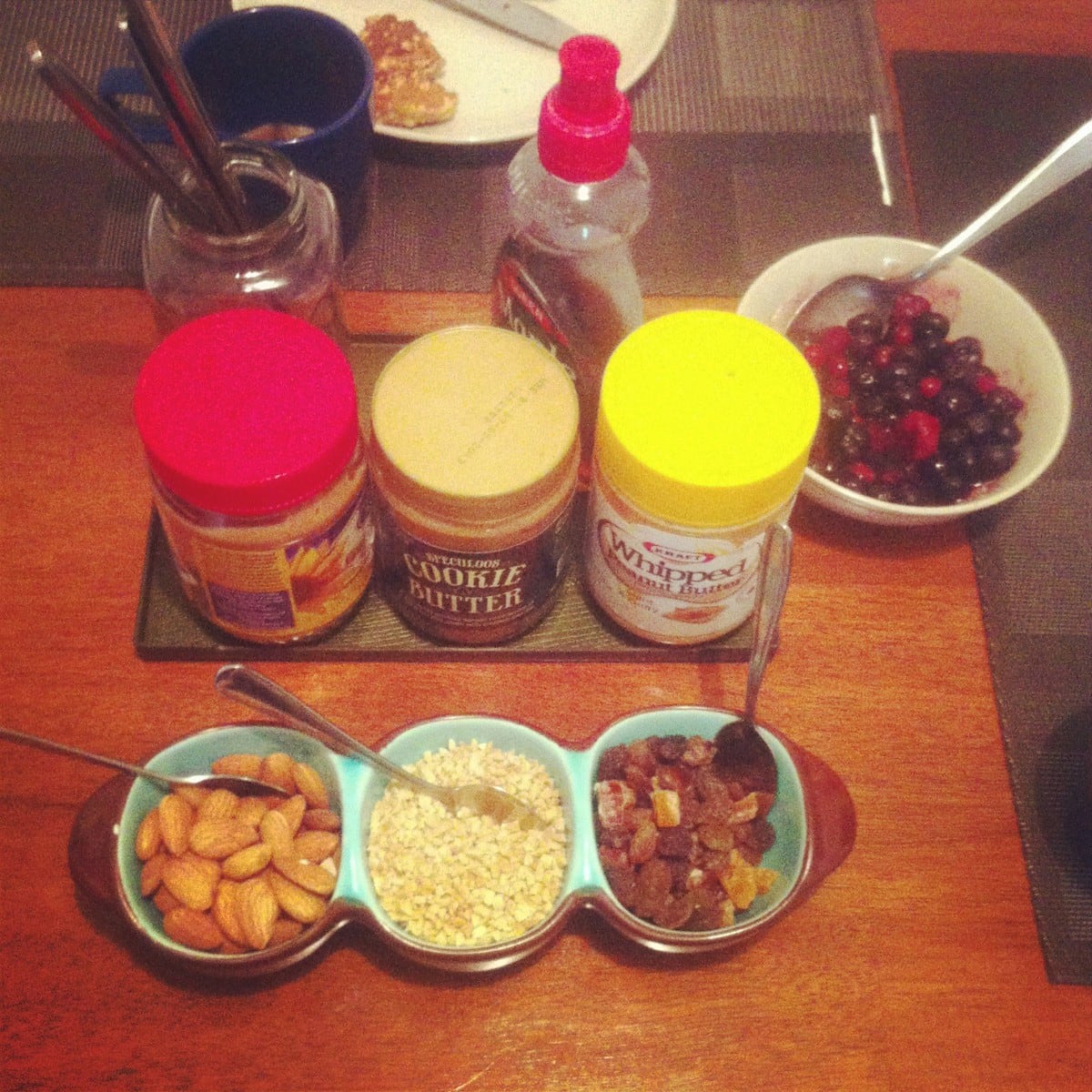 Random Fact- The day before I had friends come over for the pancake brunch, I went over to mum’s place to steal her maple syrup. I asked Niki to check and she said she would put some on her toast. She was too lazy to remove the cap fully and it popped back into her face and covered her with maple syrup. It was awesome…Until I had to go and fork out $7 for my own jar.

Anyway, one of the brunches I made this amazing baked French toast full of apples, butter and sugar. No surprises there, as it was a Paula Deen recipe. When I think of Fall, I think of those things- Apples, French toast and Paula Deen. Of course my first recipe had to feature all three of those things, minus Paula because she’s a goose. Instead, we’ll replace her with something similar- Oatmeal! Friends, I have a game changer recipe combines everyone’s favorite breakfast food (oatmeal) with a Fall favorite dessert (apple pie) and with a comforting breakfast (French toast)– Apple Pie French Toast Oatmeal! 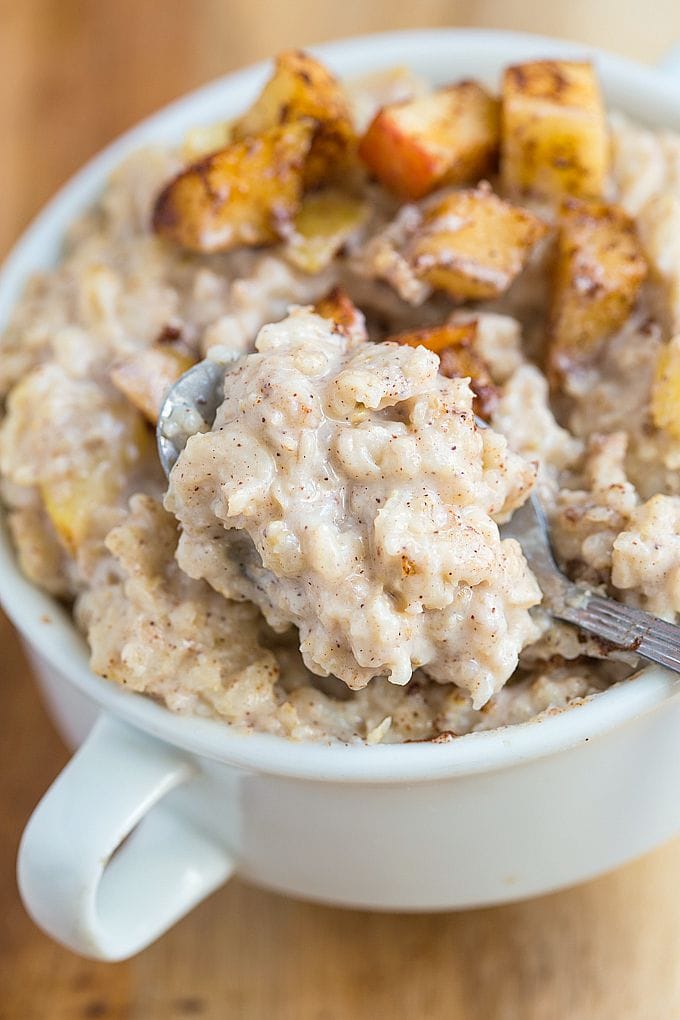 This Apple Pie French Toast oatmeal is comforting, filling and tastes like dessert but is actually healthy for you! Naturally gluten free, it’s also packed full of protein thanks to the egg (or the Flax egg if you go the Vegan route!). It has the taste and texture of a classic French Toast bake thanks to the combination of ingredients and addition of a dash of coconut flour- Similar to my Cake batter oatmeal, it really gives it that added texture! It’s perfect to batch cook and freeze portions which simply need reheating and voila- A delicious comforting breakfast to start your mornings off! While it tastes best when made stovetop, it’s also been tested in a microwave and comes out perfect! 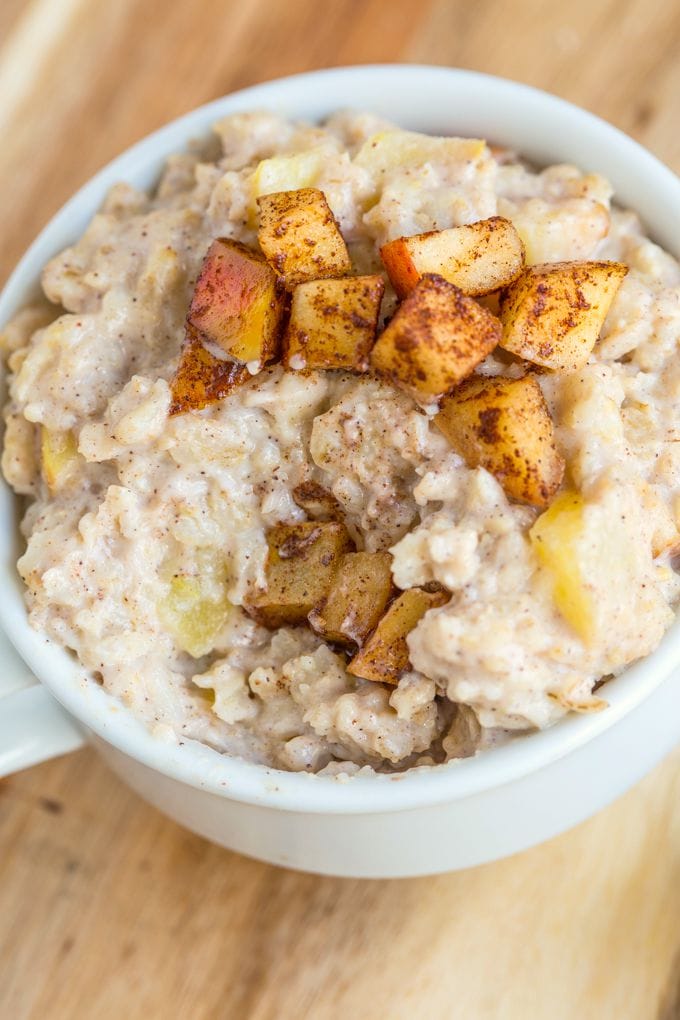 Make this delicious (and healthy!) Apple Pie French toast Oatmeal and whether you call it Autumn or Fall, at the end of the day, you can eat the same thing.

Oatmeal on your mind? You’re covered! 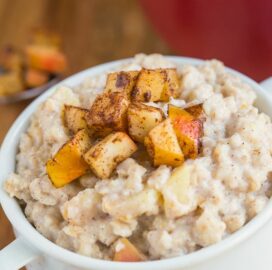 The comforting taste and texture of French Toast in a delicious, healthy oatmeal form! This Apple Pie French toast oatmeal is quick, easy and can be prepped in advance and even be frozen and thawed for quick breakfasts which simply needs reheating! Naturally gluten free and high in protein, this also comes with a vegan option!
0 from 0 votes
Print Rate
Servings: 1
Author: Arman @ thebigmansworld

For the caramelized apple

If batter is too thick, add extra dairy free milk to desired consistency- It's best to keep it quite thick to resemble a soft, French toast texture.
This can be batch made the night before and eaten hot/cold.
This can also be frozen- Simply thaw out and and reheat.
Tried this recipe?Give us a shout at @thebigmansworld or tag #thebigmansworld! 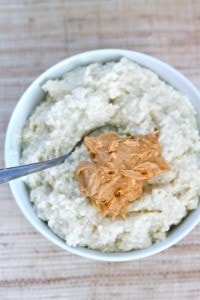 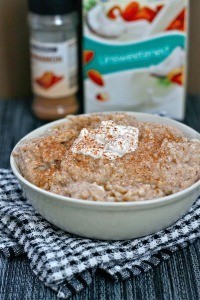 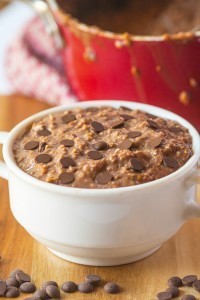 What breakfast food reminds you of Autumn/Fall/The 3rd season?

Would you eat Paula Deen on toast?