This single serving, vegan, and gluten-free cinnamon roll for one is a GAME CHANGER. No yeast, no resting time, and no microwave needed! 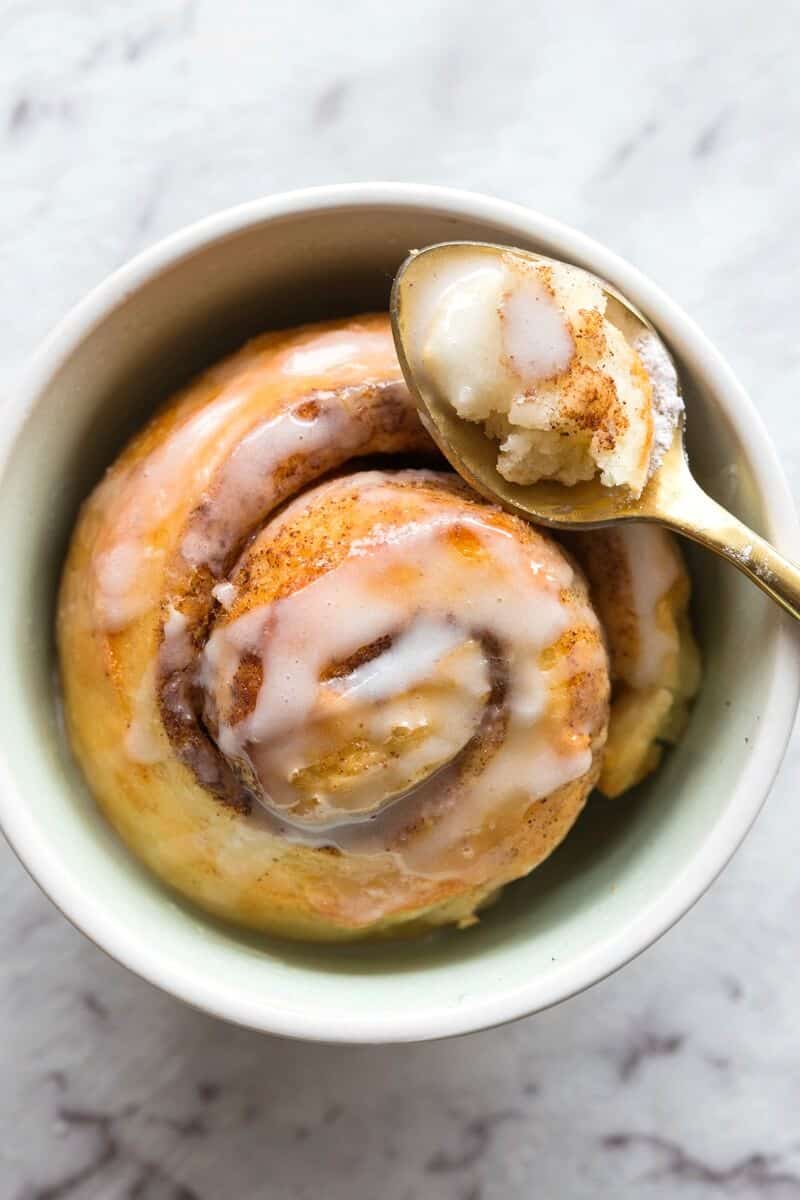 It’s no secret I love single-serving desserts around here. Some of my favorites include this protein mug brownie, vanilla mug cake, and cinnamon roll mug cake.

Now, all of those are nice and everything, but sometimes, you want something a little more close to the real deal.

Sometimes, you want a fluffy, doughy, and deliciously sweet cinnamon roll, but can’t justify making an entire batch. Even though I have a simple and easy 20-minute cinnamon roll recipe, I know myself and I’ll end up polishing it all off.

Enter- The cinnamon roll for ONE.

No, friends. This is NOT a mug cake or a cinnamon roll substitute. It is the real deal all made in a single serving size.

No sharing, no leftovers, nada. And it couldn’t be any easier! It’s perfect for when you want a quick and simple dessert, perfectly portioned.

Unlike traditional cinnamon rolls, there is no yeast, no resting time and no kneading required. The dough itself requires just 2 ingredients, and you will be left with a fluffy, doughy, giant cinnamon roll.

You’ll also notice the ingredients make it suitable for a vegan, gluten-free, and dairy-free diet. You can easily make it sugar-free too!

Taste-wise, it is sweet, spicy from the cinnamon, and tastes just like a classic cinnamon roll (like my favorite from Cinnabon!).

Texture-wise, it is doughy, fluffy and light, and pulls apart beautifully. 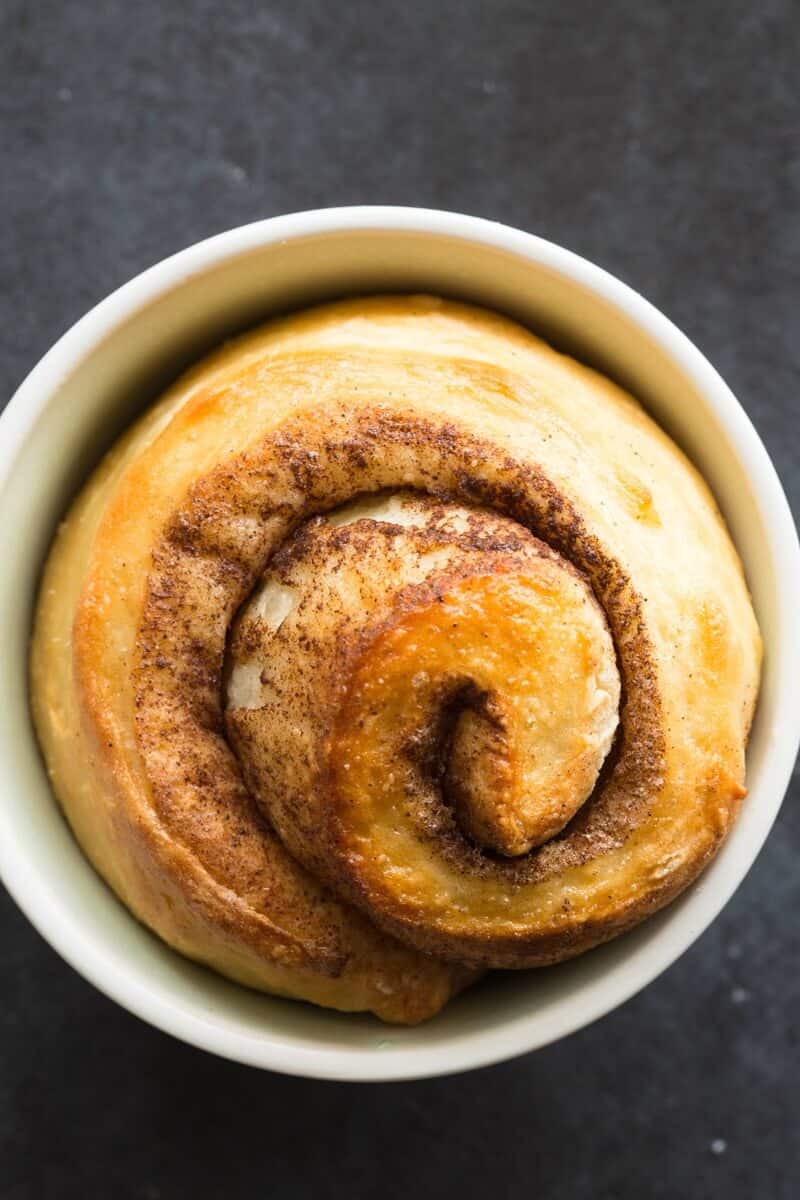 How to make a cinnamon roll for one from scratch

Start by preparing your dough. In a large mixing bowl, combine your self-rising flour with yogurt and mix well. After it is mixed, use your hands to form it into a ball of dough.

Step 2- Roll it out and shape

Sprinkle some flour onto the dough. Then, on a kitchen surface, add some flour. Transfer the dough onto it and roll it out in a rectangular shape, approximately 3 inches by 5-6 inches (the longer it is, the more it will ‘scroll’.

Spray one side of the dough with cooking spray. Then, add your cinnamon and sweetener mixture over the top. Carefully, using the thin end of the dough, roll it up until you have a single large cinnamon roll!

Transfer your cinnamon roll on to a baking tray or oven-safe dish. Brush the outside of it with either milk, butter, or water. Bake the cinnamon roll for 15-17 minutes, or until golden on the outside. Remove from the oven and let cool for 5 minutes, before drizzling with the glaze. 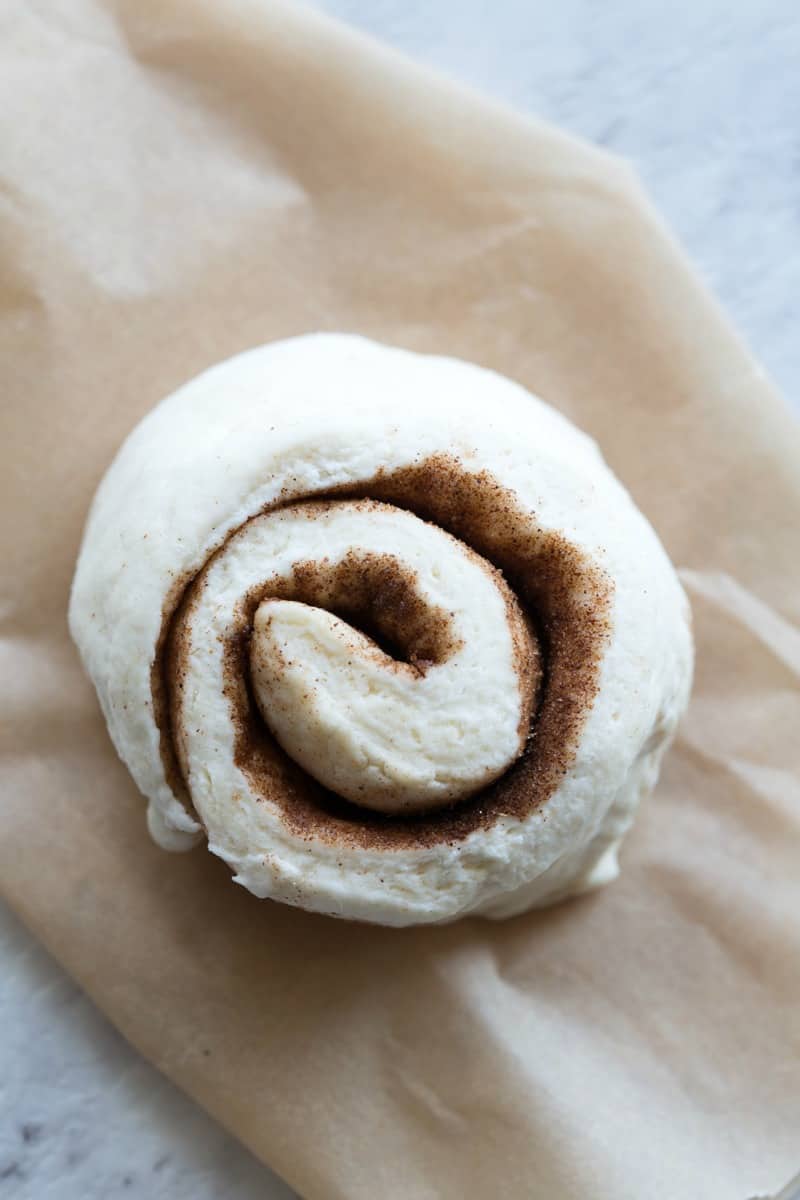 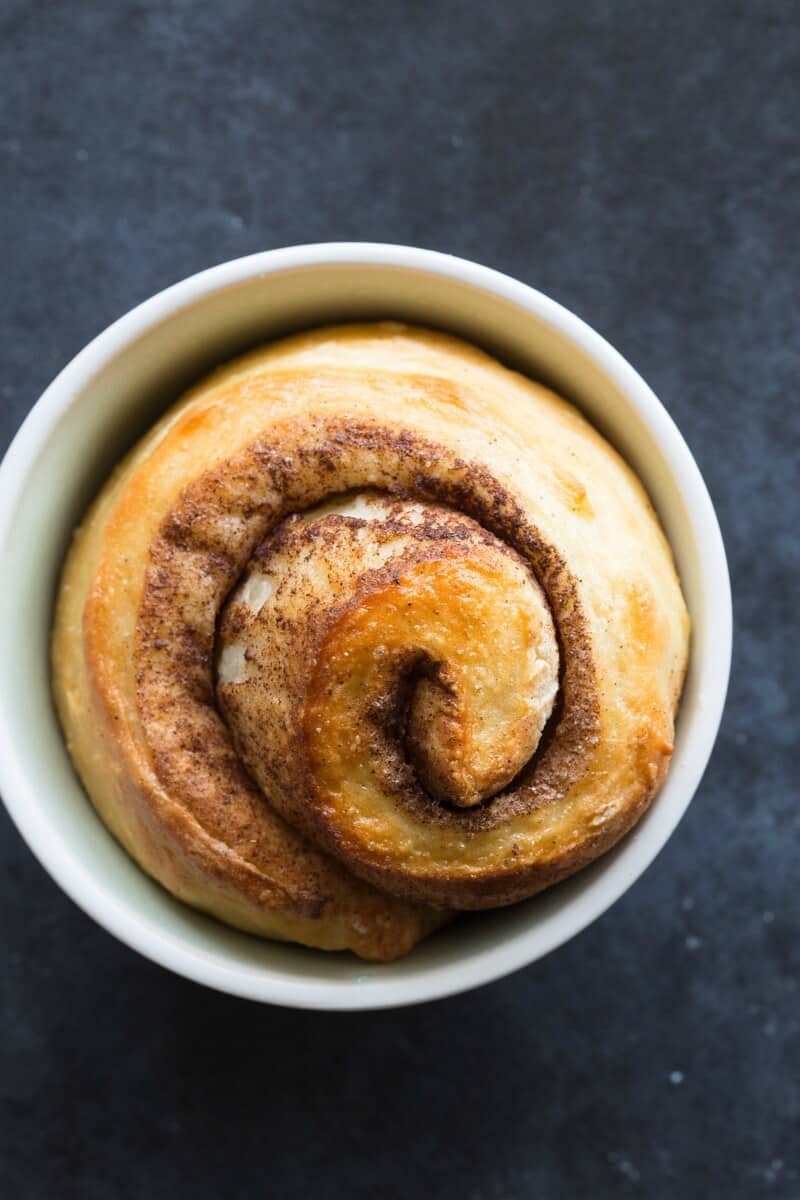 Can I make this in the microwave?

I haven’t tried this in the microwave, but I don’t recommend it. This cinnamon roll fore one isn’t like a mug cake, which generally just has flour and a mixture of sweeteners and/or egg.

If you are looking for a microwave cinnamon roll cake, try this recipe.

Can I prepare the dough overnight or in advance?

I don’t recommend preparing the dough overnight, as it becomes super sticky, and will be hard on the exterior once cooked.

You can prepare the dough up to 2 hours in advance before baking. 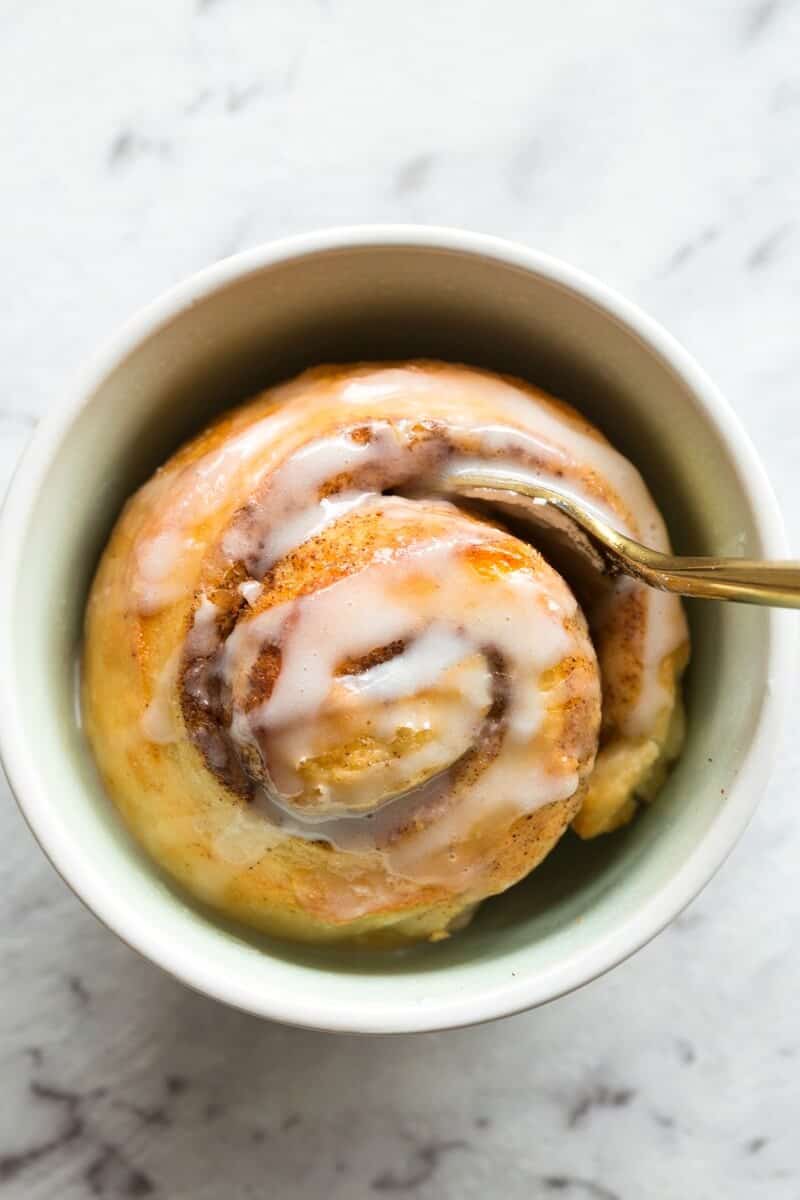 Love this Cinnamon Roll for One (No yeast!) recipe? 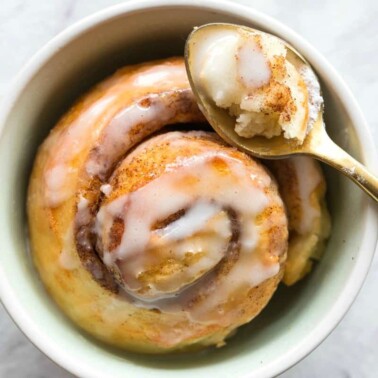 5 from 223 votes
A vegan gluten-free cinnamon roll for one is the perfect recipe when you want a quick and easy dessert! No yeast, no dairy and no resting time needed! Single serving and ready in 20 minutes!
Servings: 1 serving
Prep: 5 mins
Cook: 15 mins
Rate This Recipe Pin Recipe Print SaveSaved 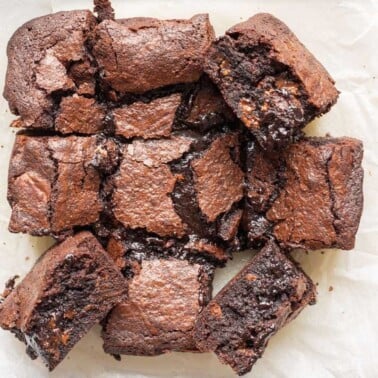 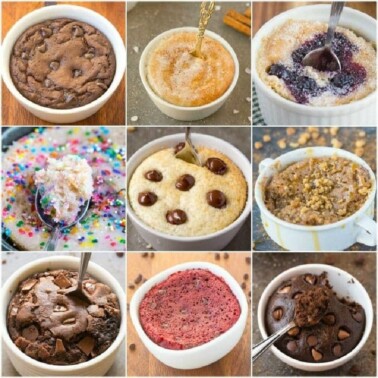 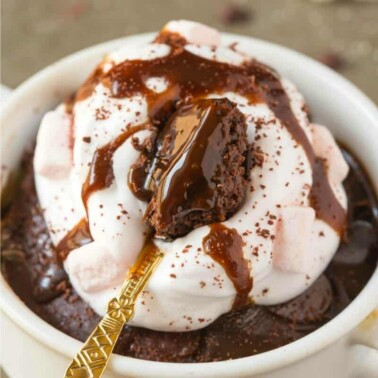 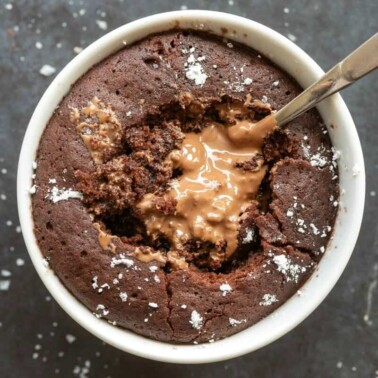