Need dinnertime inspiration? Here is an easy and healthy dinner that is always a massive hit in our house: healthy stuffed bell peppers.

Also known as stuffed capsicums, these are hollowed out peppers filled with a delicious mix of rice, meat, and cheese. We make them once a week, especially after making fried rice (and have an abundance of rice leftover). It’s a fantastic way to pack in lots of vegetables in one dish.

How to make healthy stuffed peppers

Healthy stuffed bell peppers are easy to make: the only thing to remember is to reserve some cheese to top the stuffed peppers with before baking them in the oven. Here’s the basic idea of making stuffed peppers (or see the recipe below for specifics):

Should peppers be boiled before stuffing?

There is no need to boil peppers before stuffing, as they will cook quickly while baking.

This recipe is easy to customize with different meats or for different diets out there. Here are some tested options:

What to serve with healthy stuffed bell peppers?

Stuffed bell peppers are a meal in itself, so pair it with simple vegetable sides for a well balanced and nutritious meal. Here are some of our favorites:

What color peppers are healthiest?

Red colored bell peppers are the healthiest because they are harvested late and have the most nutrients.

How do you soften bell peppers before stuffing?

How do you keep stuffed peppers from getting soggy?

The key to preventing stuffed peppers from becoming soggy is to NOT over-bake them. 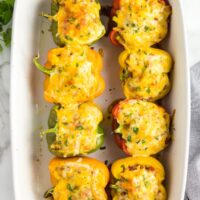 TO STORE: You can store leftovers in the refrigerator in airtight containers for up to 4 days. TO FREEZE: Place the cooked and cooled peppers in a shallow container and store them in the freezer for up to 6 months.  TO REHEAT: Thaw and then heat in the microwave to enjoy them again.