Easy cinnamon sugar soft pretzels made with 2 ingredient weight watchers dough! No yeast and no fancy mixers needed to make these copycat Aunt Annie’s Cinnamon pretzels! Made in one bowl and ready in 20 minutes! 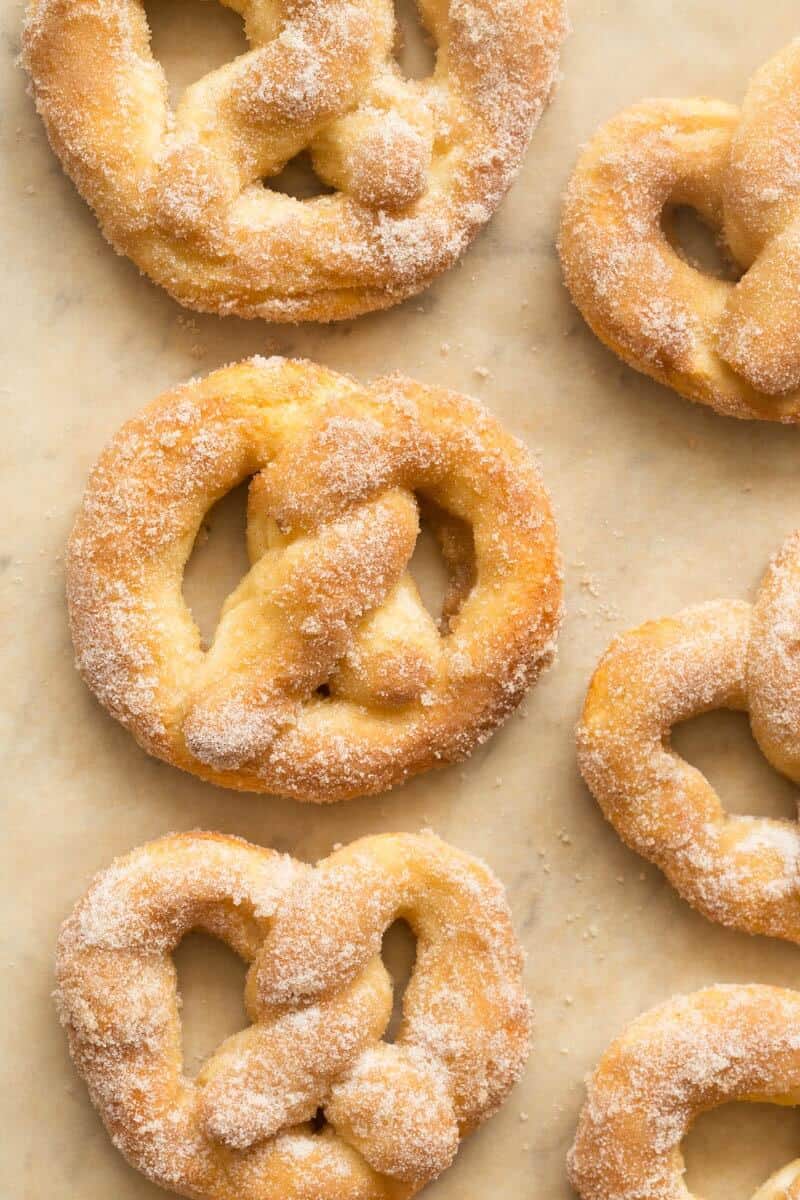 I’ve been obsessed with using my 2-ingredient Greek yogurt dough in a plethora of recipes. We’ve had the famous pizza dough, no yeast cinnamon rolls, and homemade pop tarts.

After sharing my 2-ingredient dough soft pretzels, I knew I had to re-create my favorite flavor- Cinnamon!

These homemade cinnamon sugar soft pretzels are my new obsession.

Inspired by Aunt Annie’s Cinnamon Sugar Soft pretzels, I had to give them a healthy makeover!

Made in one bowl and with NO fancy mixers or kitchen gadgets needed, you have NO excuses not to make it.

I’ve been enjoying them as part of breakfast, as a snack and even as a dessert before bed!

Taste-wise, they are sweet, warm, spicy and LOADED with sweet cinnamon flavor.

Texture-wise, they are soft, doughy and fluffy in the center, with a tender exterior. 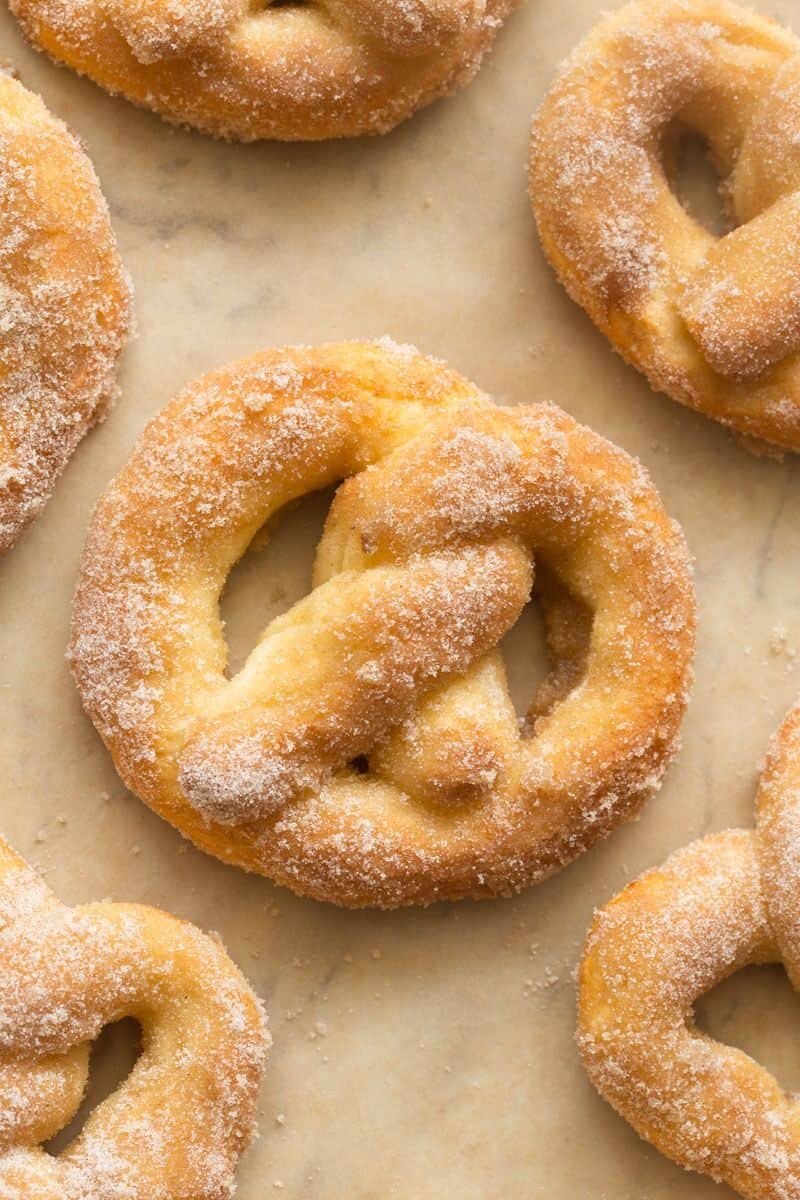 How to make cinnamon pretzels without yeast

NOTE: Using 0-calorie cooking spray and a sugar substitute will ensure this recipe is low calorie AND sugar-free.

In a large mixing bowl, you’ll start by mixing together the self-rising flour and Greek yogurt (or coconut yogurt). Mix until combined. Once they are combined, use your hands to form a ball of dough.

Then, add a tablespoon of extra flour on top of the dough. On a kitchen surface (or a chopping board!), add some flour to it and spread it apart. Transfer the ball of dough onto the floured surface. Knead the dough gently, before pressing it into a circular shape. Using a knife (or pizza cutter), divide the dough into 8 even pieces.

Once that is done, grab one piece of dough. Roll out the dough into a thin, sausage shape (around 12 inches/30 cms). Then, you’ll grab each end of the dough and join at the center, before rolling under and twisting to form a pretzel shape. Repeat the process until you have 8 soft pretzels.

TIP: Regularly re-flour the surface, to avoid the dough becoming too sticky to work with.

Transfer the pretzels onto a lined baking tray. If desired, use a pastry brush and brush some milk, butter, oil, or even water on top it.

Bake the pretzels for 17-20 minutes, or until golden brown on the outside. Remove from the oven and allow to cool for 20 minutes, until just warm.

Step 3- Coat them in Cinnamon!

On a large, flat plate, mix your cinnamon and sugar/sugar substitute together.

Once the pretzels have cooled down to a temperature you can easily hold (still warm), spray both sides with cooking spray. Dip each side of the pretzels in the cinnamon/sugar mixture, until coated. Repeat the process until you are left with 8 cinnamon sugar pretzels! 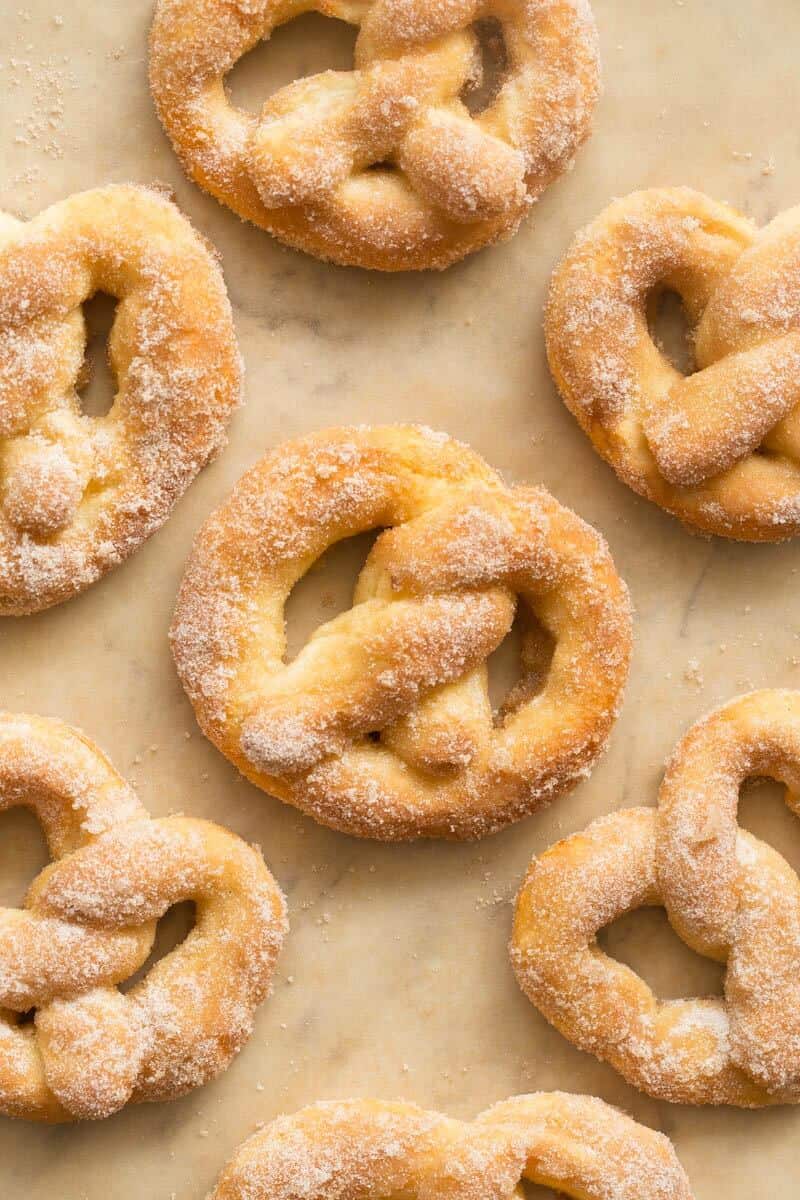 How to make self-rising flour

Many of you have told me that you’ve found it hard to get self-rising flour. I’ve written this post here on how to make your own!

Are these vegan and gluten-free?

Yes, these cinnamon sugar soft pretzels are vegan and gluten-free.

I opted to use coconut yogurt, which is naturally dairy-free (suitable for vegans). I also used gluten-free self-rising flour, to ensure this recipe was also 100% gluten-free.

Please do not use plain yogurt or Greek-style plain yogurt. You’ll find that the dough will be incredibly sticky, and more often than not, require almost twice as much flour to be malleable.

The only non-yogurt substitutions that work are-

How many calories in a homemade Cinnamon Sugar Soft Pretzels?

Calorie-wise, Aunt Annie’s soft cinnamon sugar pretzels clock in almost 4 times as many calories as one of my homemade ones! They also contain a whopping 99 grams of carbs! 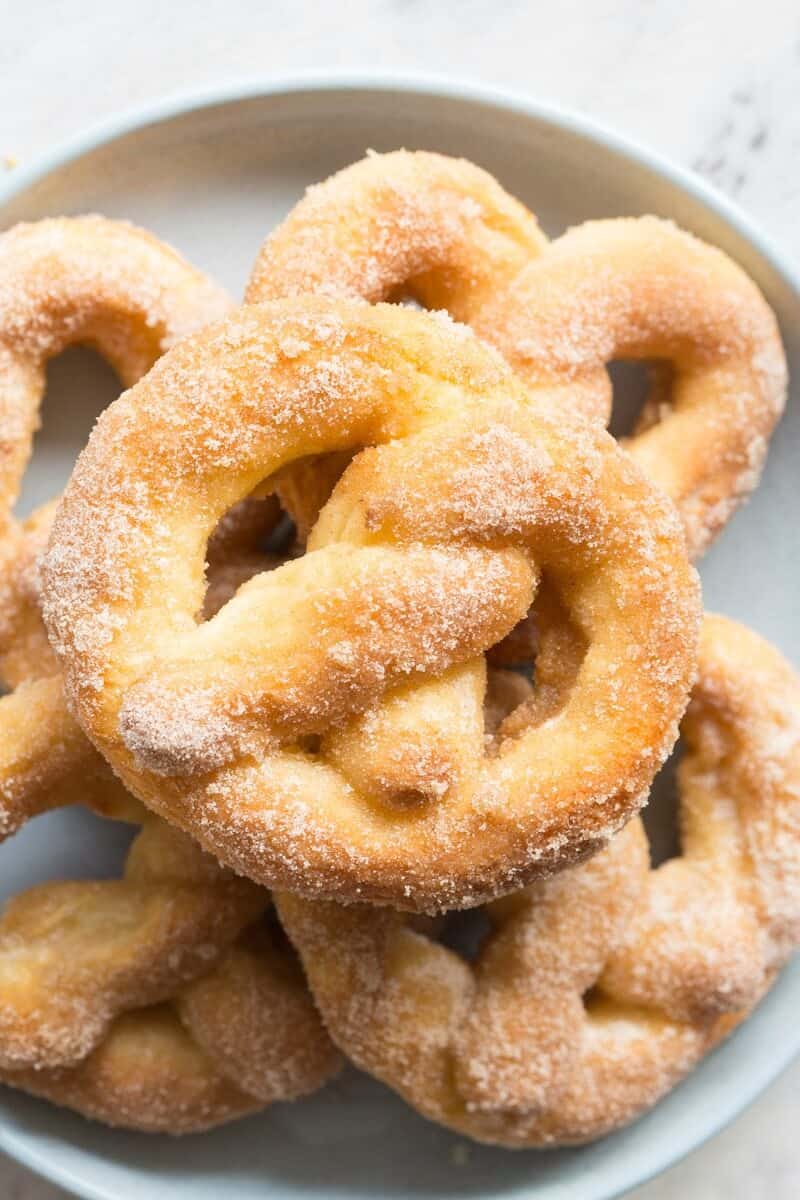 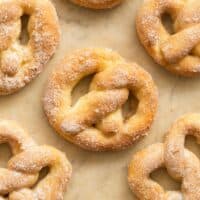 If you prefer a sweeter dough, add 2 tablespoons of sugar/sugar substitute into the flour before mixing with the yogurt. Please refer to the body of the post for yogurt substitutes, including the vegan yogurt used (coconut yogurt).  For more recipes without yeast, click here.