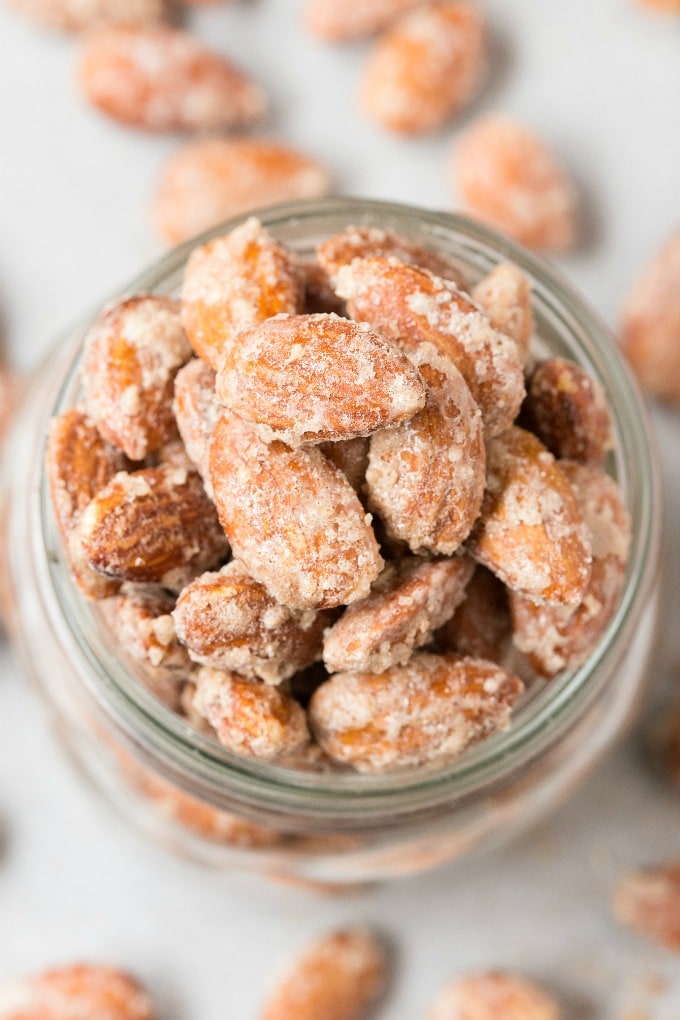 When it comes to the holidays, the cinnamon flavor comes out in full-throttle. The good old humble nuts also play a big role.

As an avid cinnamon fan, I’m often perplexed as to why people seem to really have a hatred towards anything with cinnamon in it.

There is no better scent out there than anything with a dash of cinnamon, and this REALLY becomes evident during the holiday season.

This year, I’ve made it my mission to ensure that all the gifts I give are 100% homemade. As someone who has NO artistic skills or talent, this means edible gifts it is!

Pecans seem to take center stage when it comes to candied nuts, but I must say, I prefer candied nuts of the almond variety. They aren’t as greasy, they are crunchy, crispy and hold much more of the cinnamon than the other nuts.

They are even more protein-packed and filling, making them the perfect snack to enjoy between meals or to keep hunger at bay. 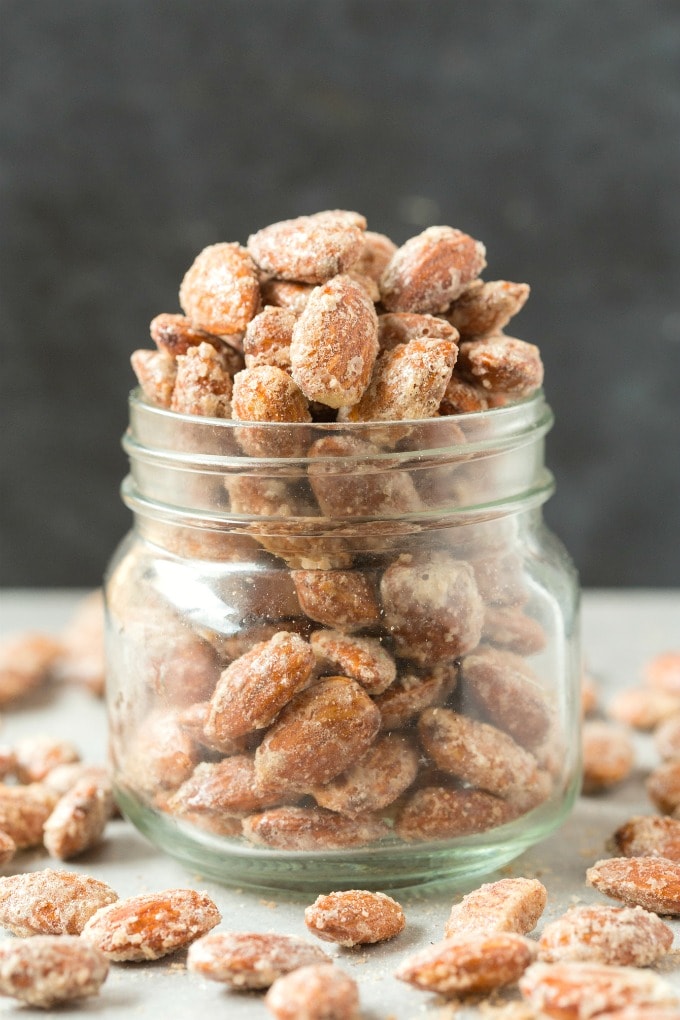 It sounds like the ultimate oxymoron, to have candied cinnamon almonds with no sugar. However, these candied almonds have all the sweetness and texture!

Instead of using white sugar, brown sugar or honey, I used a granulated zero calorie sweetener, monk fruit. It has the same texture and flavor of white sugar, minus the carbs and calories.

It also is suitable for those following a keto, low carb, and vegan diet.

Using monk fruit sweetener will ensure the almonds are caramelized and have the sugar coating on each nut which is mandatory!

The addition of cinnamon takes it up a notch and really gives it that festive flavor and feeling. If possible, use Saigon Cinnamon (as opposed to dutch processed), as it really has a robust punch to it! 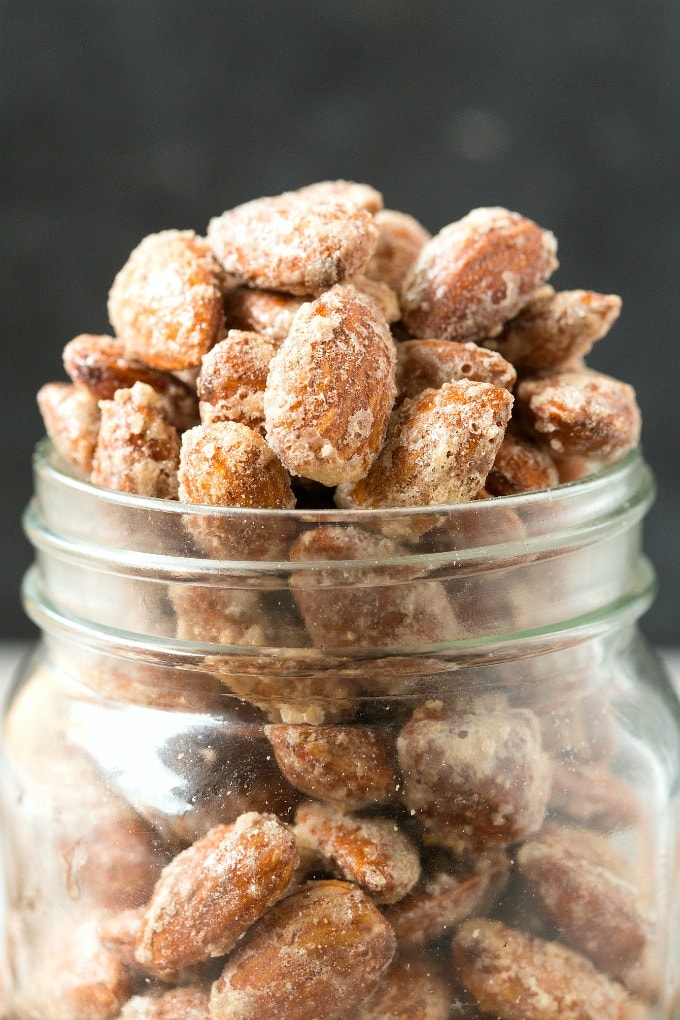 The best part of these sugar free candied almonds is that they taste just like classic candied almonds. This means they are the perfect edible gift to give others over the holidays, or even serve as appetizers or a healthy dessert.

They also last a VERY long time. One batch can be kept at room temperature for up to 2 months! Just be sure to keep it covered or in a sealed container. I’ve also sent these candied sugar free almonds overseas (thank you, international mail!).

I understand not everyone celebrates Christmas or other holidays around December, but that doesn’t mean candied almonds can’t be enjoyed! Sugar free candied almonds make a delicious protein-packed and filling snack between meals. They are packed with fiber, healthy fats and the crunchy texture we all love.

To say this recipe is fool-proof and easy is an understatement! They take literally 10 minutes to whip up and you don’t need an oven- They are made stovetop!

It’s a simple process of heating up all the ingredients (minus the almonds) until hot, before covering and coating the almonds in it to crystalize! 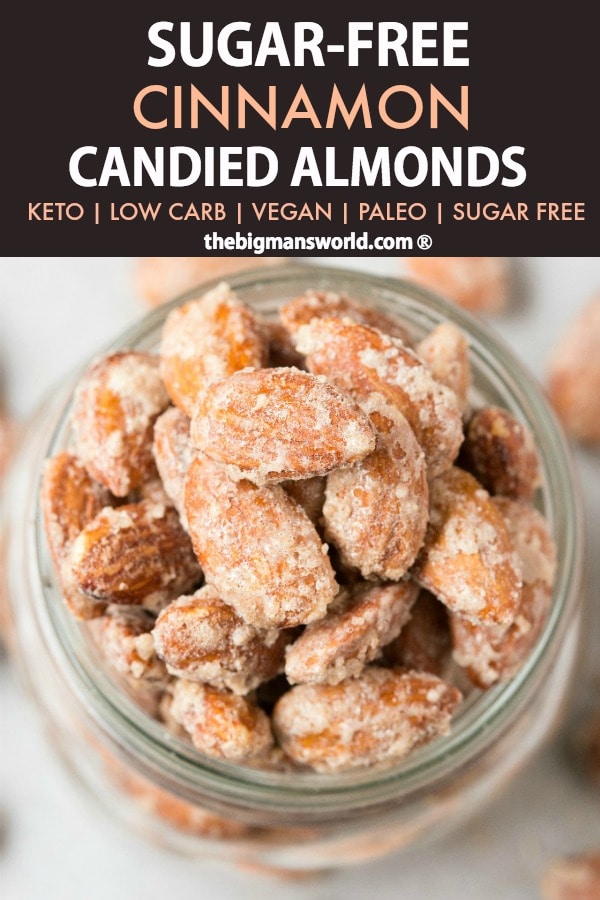 A healthy snack, a holiday edible gift or an easy, festive dessert, these sugar free cinnamon candied almonds will be your new favorite! 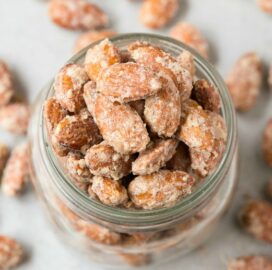 * Can be substituted for any granulated sweetener of choice Healthy Sugar Free Cinnamon Candied Almonds (Keto, Paleo, Vegan) can keep in an air-tight container for up to 3 months. They are also freezer friendly.