This keto cherry pie is made with a delicious cherry pie filling covered with a flaky and buttery crust! Made with simple ingredients, it’s an elegant dessert that is sure to impress! 5 grams net carbs per serving. 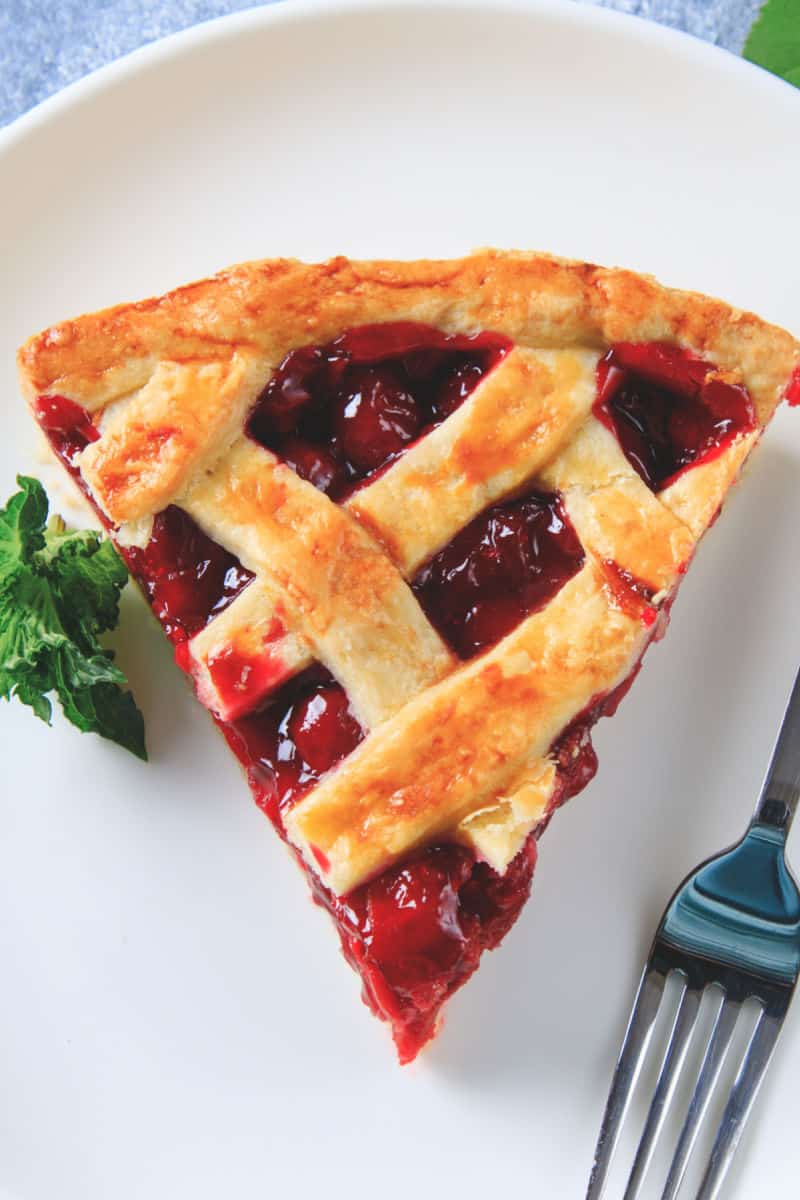 When it comes to keto dessert pies, my favorite recipes to make are a blueberry pie, lemon meringue pie, and this keto cherry pie.

During the warmer months, my parents would always take my sister and me cherry picking. We’d load up the car with buckets and by the end of the day, they’d be filled with fresh, juicy cherries.

Obviously, we’d eat as much as humanely possible, but there would always be leftovers. With those, my mom would always use them to make desserts. She’d sometimes make pastries or compete but most often, she’d make a cherry pie.

Technically, any fruit can be enjoyed on a keto diet, but the amount varies depending on the carb content. While cherries are higher in carbs than other fruits, their net carbs are low enough to be keto friendly. To cut the carbs on cherry keto desserts, a secret trick is to replace half the cherries with cranberries. This keeps the juicy textures intact without affecting the carbs too much!

As such, I’ve been meaning to share a keto cherry pie recipe for quite some time. Although the crust might be a little more time-consuming to make, you’ll be left with a perfect pie that everyone will rave about!

No sugar and no grains are needed, but you’d never tell. The texture of the cherry pie filling is gooey and thick, and the crust is buttery and flaky. The pie is sweet and slightly tart, bursting with fresh cherry flavor!

I had some friends over for a dinner party the other night and served this pie for dessert and NO ONE believed me when I told them it was low carb- It was so sweet and comforting!

How do you make a keto cherry pie?

Start by preparing the pie crust. The amount of crust will likely be greater than what will be needed, but it’s better to have extra than not have enough. In a blender or food processor, add your almond flour, coconut flour, sweetener, baking powder, salt, and xanthan gum and blend until combined. Add the vinegar and cold butter and blend until just combined. Fold through the egg until just combined.

Next, use your hands to form a uniform dough. Divide the dough into two portions, ensuring one is larger than the other. Flatten both balls into thick disks. Wrap plastic or saran wrap around each one and freezer for half an hour. After half an hour, take the larger disk of dough out of the refrigerator. Place a large sheet of parchment paper onto a flat surface. Place the disk of dough on top of it, followed by another large sheet of parchment paper. Roll out the dough until it forms a circular shape, around 11-12 inches in width (to fit a 9-inch pie dish). Refrigerate the dough again for another 30 minutes, to help it firm up more.

Now, transfer the flattened dough into a greased 9-inch pie dish and press down into it. Smooth out the edges of the crust and fill in any pieces that may have fallen off. Cover the edge of the crust with tin foil to avoid it from burning. Place the crust into a preheated oven and pre-bake at 180C/350F for 10 minutes. Remove the crust from the oven.

In a mixing bowl, combine your cherries, cranberries, and lemon juice until combined. Add the sweetener, cornstarch, and xanthan gum and mix very well. Let the mixture sit there while you prepare the second piece of dough. Roll it out until it is around half an inch in size. Slice strips and freeze them while you prepare the pie.

Finally, remove any excess juices from the cherry pie filling. Place it into the par-baked pie crust. Remove the strips of dough from the freezer and place them in a lattice shape on top of the pie. Brush the exterior of the crust with an egg wash, followed by unsalted butter. Bake the pie for 40-45 minutes, or until the tops are golden brown. Remove the pie from the oven and let it cool completely, before slicing and serving.

Tips to make the best pie 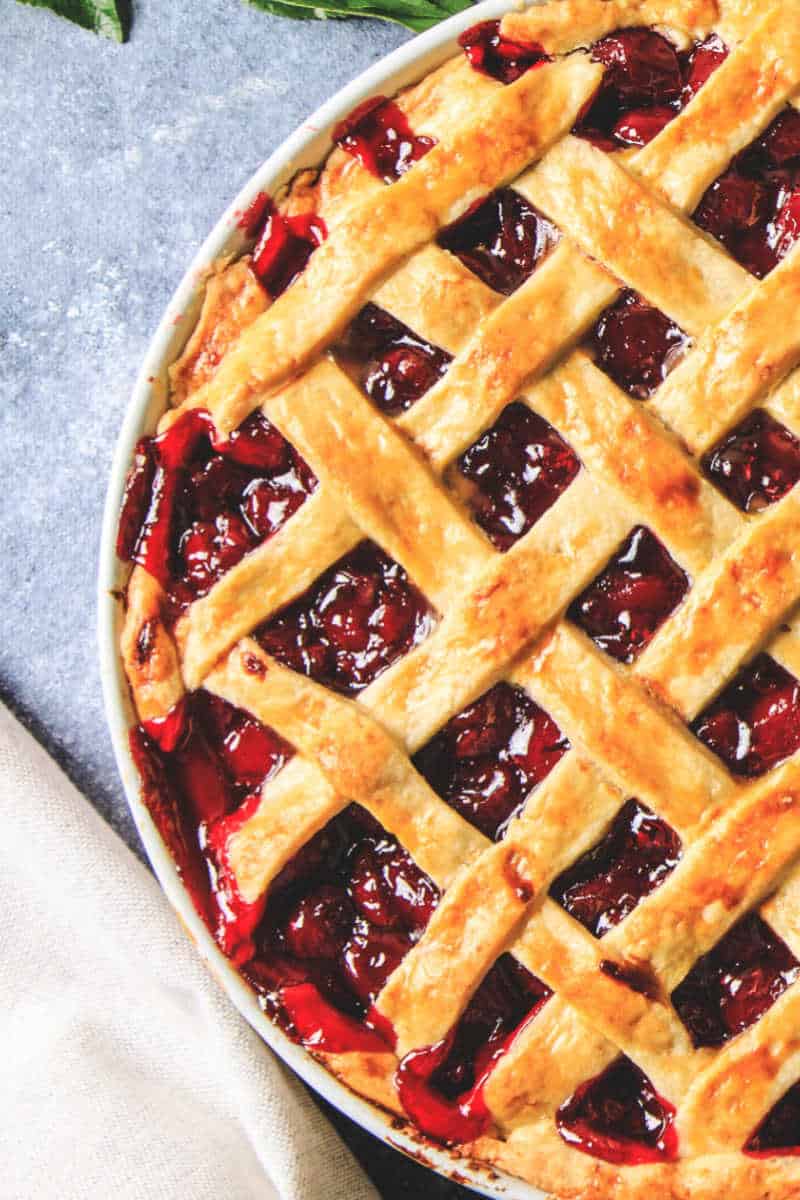 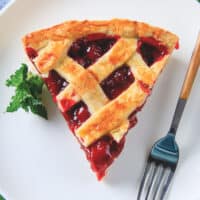 This keto cherry pie is made with a low carb cherry pie filling in a buttery and flaky crust! Made with simple ingredients, it's an elegant dessert that is sure to impress!
5 from 37 votes
Print Rate
Course: Dessert
Cuisine: American
Prep Time: 10 minutes
Cook Time: 45 minutes
Total Time: 55 minutes
Servings: 16 servings
Calories: 245kcal
Author: Arman

TO STORE: Sugar free cherry pie should be stored in the refrigerator, covered. It will keep well for up to 2 weeks.  TO FREEZE: Place leftovers in a shallow container and store it in the freezer for up to 6 months.  Recipe loosely adapted from here.