Friends, I think every country needs to take Valentine’s day traditions from Japan.

One of my friends is currently on a 2+ year stint teaching English to school-aged children in Japan. Every week, she sends us a group email with everything she’s been up to, along with some of the more ‘different’ traditions or customs she’s faced. Along with these emails, I try to skype or Facetime with her regularly. As nice as emails are, there is only so much you write.

The other day, we were having one of our skype sessions and she was telling me about the infamous Japanese traditions around Valentine’s day. 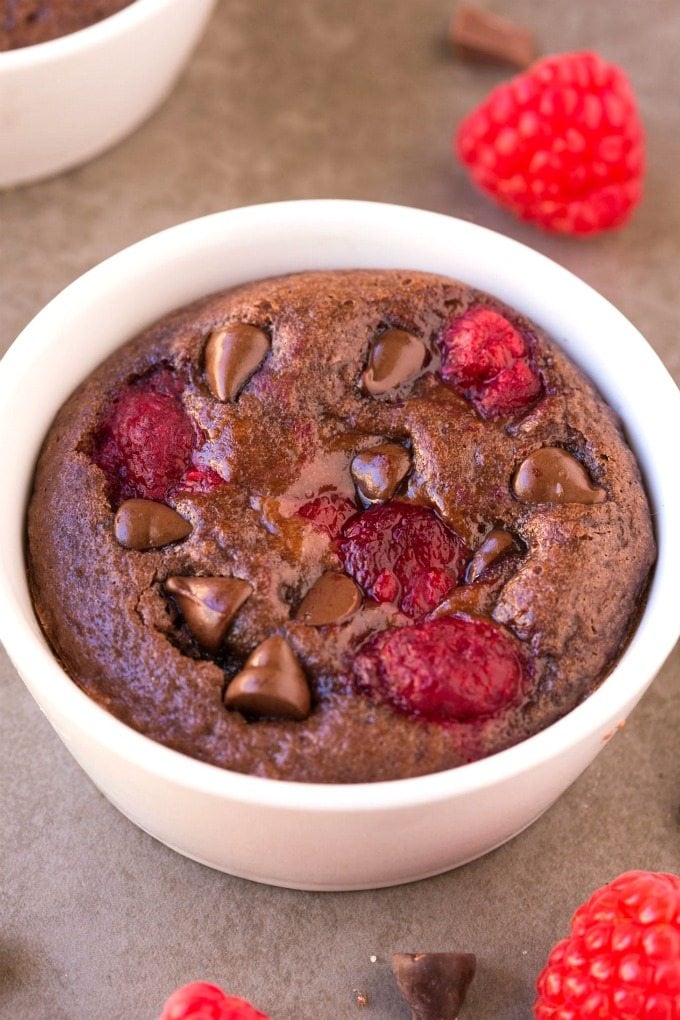 For most of us, we’d associate giving candy, chocolate or a sprig of kale our special someone. If we’re being a little frisky here, there may be SEVERAL people you’d be gifting things do, come February 14th. For some of us, it may just be another day of the year.

Now, before you start assuming the Japanese population is completely promiscuous, think again- They are absolute geniuses.

In Japan, the love-centric holiday is featured twice, and NOBODY misses out. 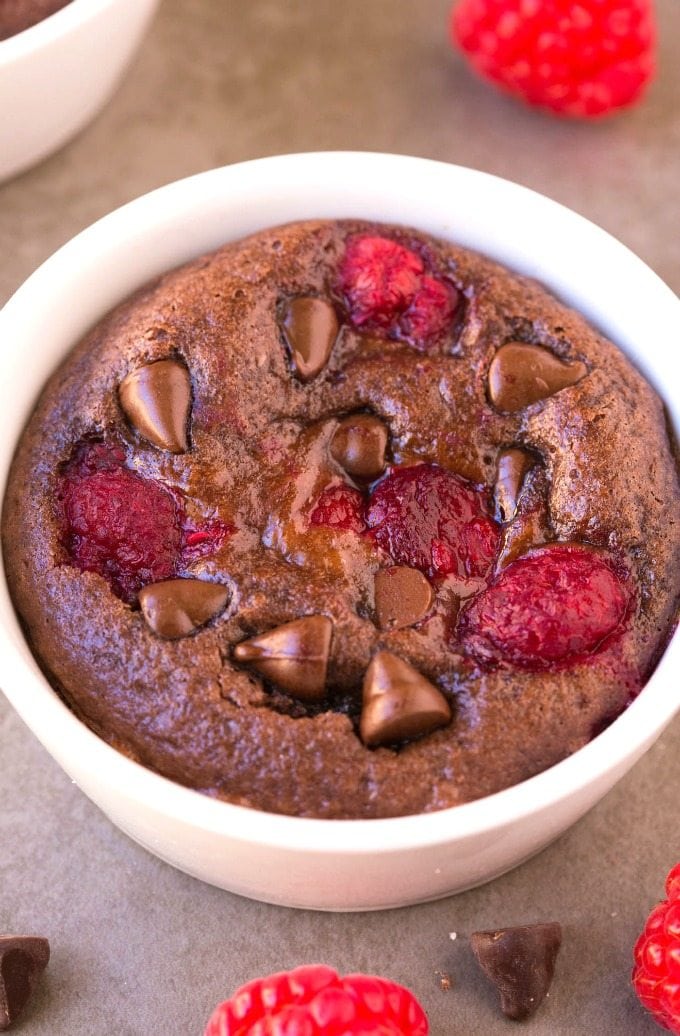 Before you think this is all fine and dandy, except for the fact that it is SEXIST, thing again- Roles are reversed a month later!

On the 14th March, the male population has to return the favor, on an occasion dubbed as ‘White Day.’ For every person who gifted them chocolate (obligation or other), they have to give them chocolate back.

HOW GENIUS IS THAT?

Although I was given a ton of store bought chocolate, I would make the hashtag #foreveralone trend on all social media platforms. 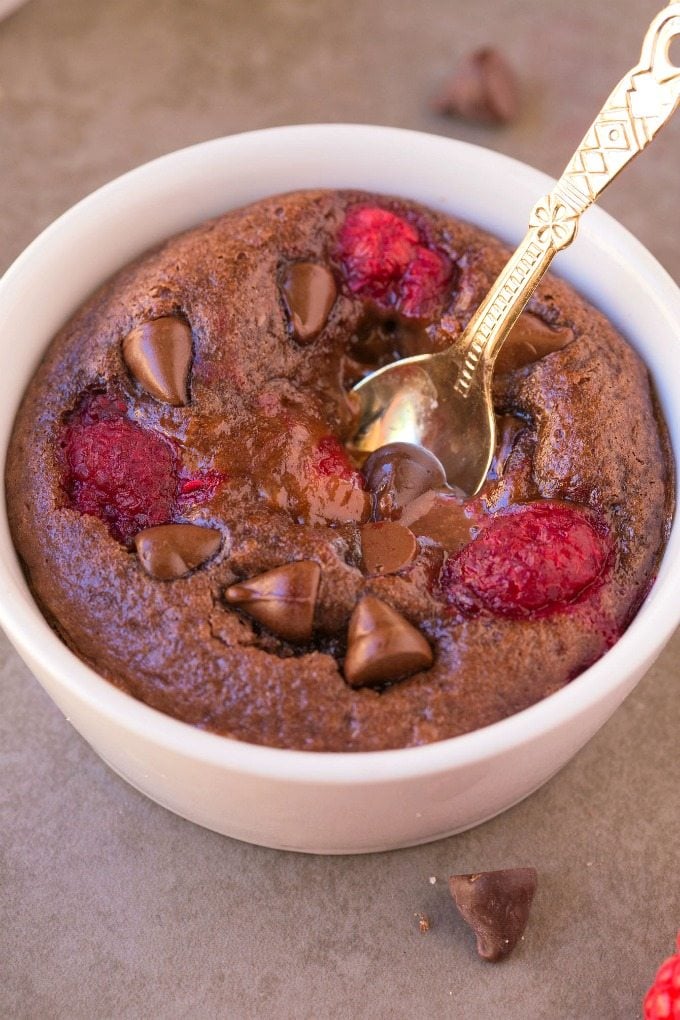 With Valentine’s day just under a month away, I’m already sorting out my friend list into obligation and temptation.

It’s an excuse to whip out all things chocolate, puffy hearts, and your prominent single status. When I think of flavors which emulate love, I always think of the chocolate/raspberry pairing. The handful of Valentine’s day parties/events I’ve attended , I’ve always seen this duo prominent. From raspberry filled truffles to chocolate and raspberry bon-bons, this duo is prevalent. Outside of Valentine’s day, it’s one of my favorite combinations regardless.

Long term readers know that I’m a huge fan of single serve desserts, especially when it comes in brownie form. When it comes to fruits, raspberries are also one of my favorites. What better way to embrace my solidarity than to marry these two together? 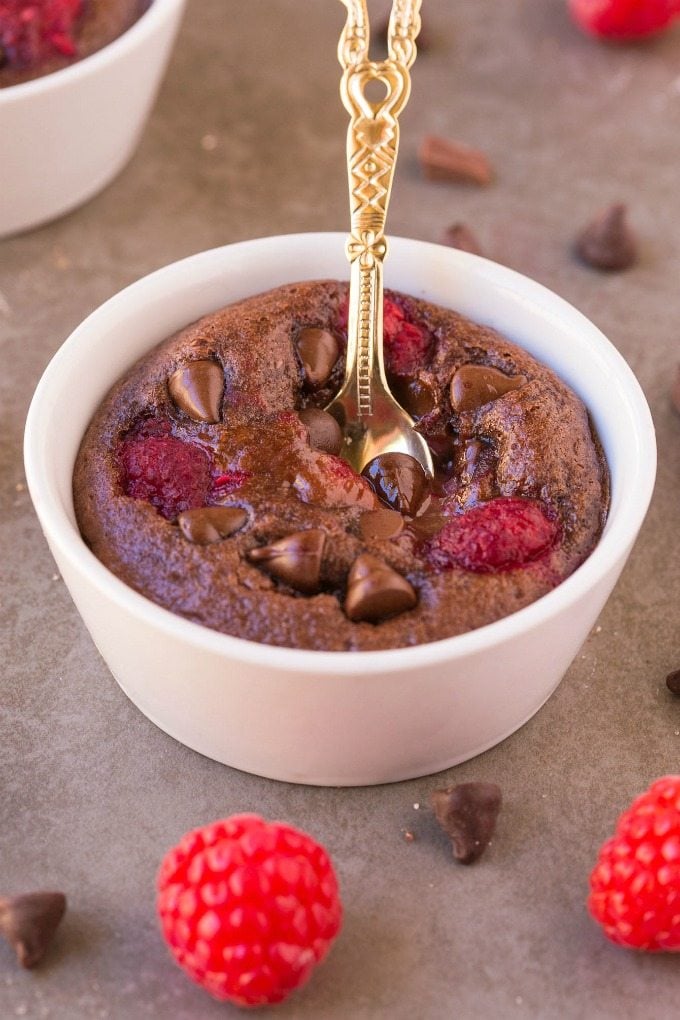 This healthy chocolate raspberry brownie is moist, gooey and bursting with raspberries and chocolate flavor! It’s ready in less than a minute, and comes with a tested oven option too! Unlike traditional brownies, this isn’t made up of butter, oil, flour and several types of sugar. Instead, it’s based around coconut flour, a lower carb and higher fiber grain-free flour. Instead of butter or oil, this fudgy brownie uses smooth almond butter (smooth peanut butter works well too!) and unsweetened applesauce. For those with nut allergies, you can easily replace it with sunflower seed butter, soy nut butter, or even wow butter. The final touches are some chocolate chips of choice (I prefer these dairy free ones, but to keep this sugar free, use these sugar free chips) and of course, the raspberries!

Because of the ingredients used, this healthy chocolate raspberry brownie is naturally gluten free, paleo, sugar free, dairy free, grain free and vegan! For my vegan friends who don’t want to use the flax egg option (which can be a little bit trippy, depending on the brand of flax meal AND the amount of time you let the flax egg sit), you can simply increase the milk of choice by a tablespoon. It won’t hold up as well, but it will be super fudgy!

HACK! While some may argue that fresh berries are superior to their frozen counterpart, this is the kind of recipe where frozen is key. As the pictures show, the thawed berries make the mug cake/brownie hybrid even gooey, which takes it to that next level! 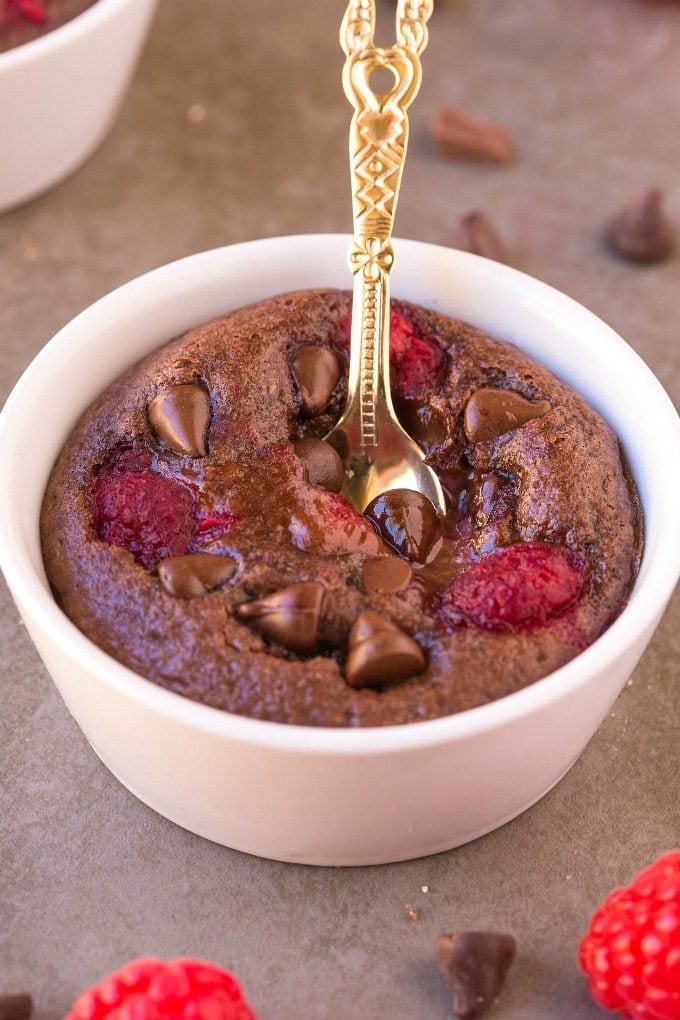 Make this healthy one minute chocolate raspberry brownie and let’s get packing. 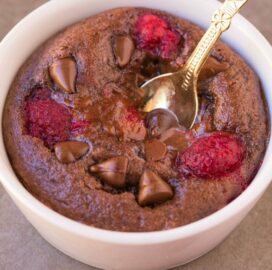 * You may need more depending on the brand of coconut flour you use.
** You can omit the flax egg and increase the milk a tad- It won't be as fluffy, but more moist and gooey.
Tried this recipe?Give us a shout at @thebigmansworld or tag #thebigmansworld!
More delicious raspberry spiked recipes? Gotcha covered!

Have you ever heard of any other alternative Valentine’s Day traditions?