Keto naan is a low carb and grain free take on the classic Indian naan bread. Thick, fluffy, and topped with a simple garlic butter, it’s perfectly paired with cauliflower rice or veggie burgers. No rest time, no heavy kneading, and no fancy kitchen mixers needed. 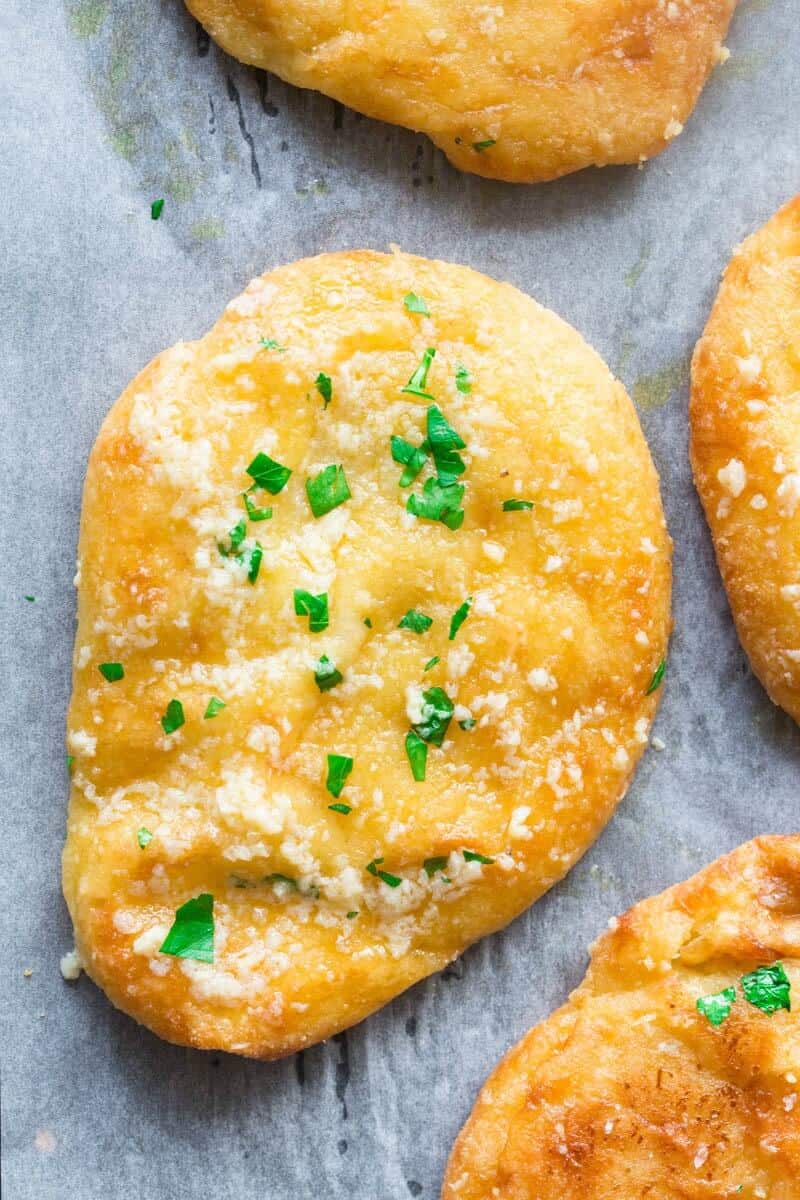 Ever since sharing my 2 ingredient dough naan recipe, I’d been meaning to make a keto naan bread. Fluffy and delicious naan is something I’d missed since going keto, so I was SO keen to recreate one of my favorite foods ever.

Inspired by my keto chips, I played around with the base ingredients to create this delicious low carb naan!

Unlike traditional naan, this keto version is made without flour and without yeast, but you’d never tell. It’s thick, fluffy and doughy, and takes less than 20 minutes to make!

Now, don’t be deterred by the use of mozzarella cheese- It doesn’t give any cheesy flavor but adds the most buttery texture. We love serving this easy keto naan with homemade keto korma and curries, or even on its own- It makes a fabulous keto naan pizza or can be flavored in many ways.

How do you make keto naan

Start by microwaving the mozzarella cheese with milk, until it has melted. Transfer it to a large mixing bowl to let it cool slightly, before adding in the eggs, almond flour, and baking powder. Mix very well, until a ball od dough remains. Let the dough sit for 5 minutes. Once it has cooled slightly, form 8 balls of dough and flatten them out to a rough, circular shape. Place the naan on a baking dish and bake them for 18-20 minutes, or until just done. Remove from the oven and let sit for 10 minutes, before brushing with butter and minced garlic. 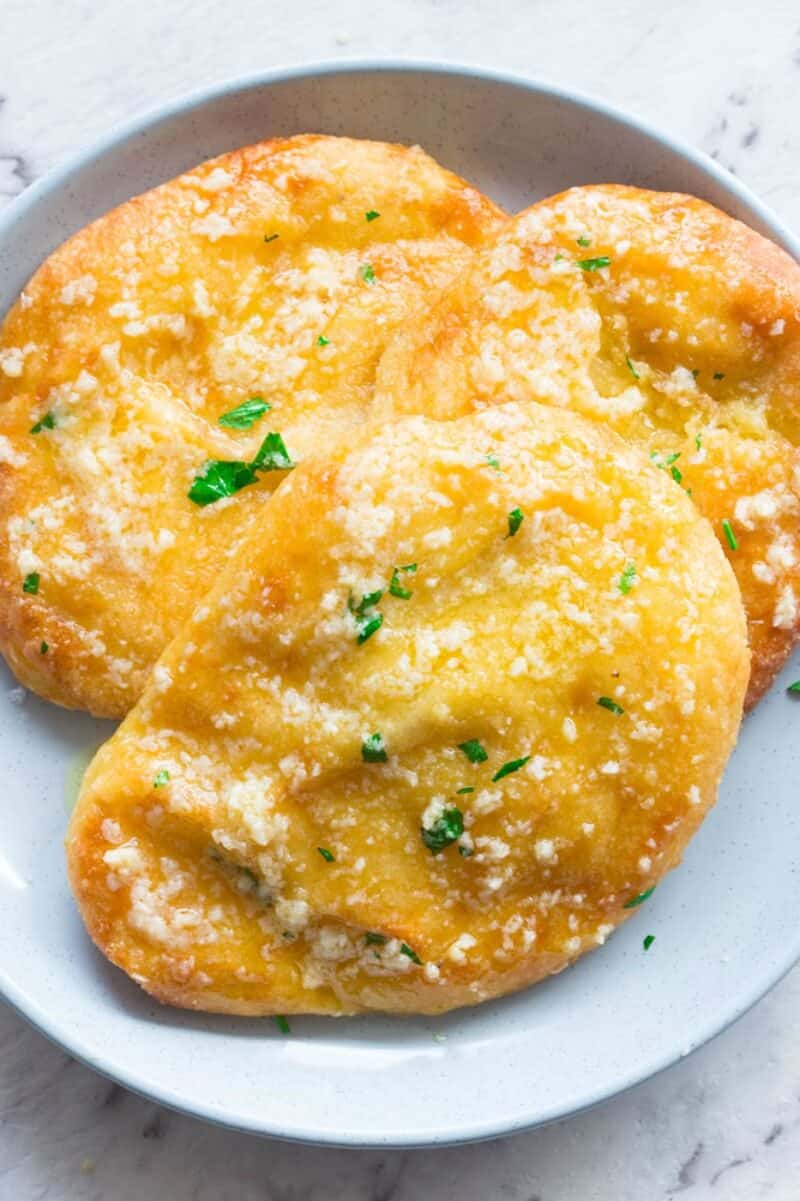 Can I make this stovetop?

If you’d prefer to make this keto naan stovetop, you’ll need to let your dough sit until cooled. Once cool, preheat a non-stick pan on medium heat and generously grease it (to avoid the cheese melting onto it). Reduce the heat to low and cook the naan for 2-3 minutes, before carefully flipping and cooking the other side. Continue until all the naan has been cooked.

Tips for the perfect naan 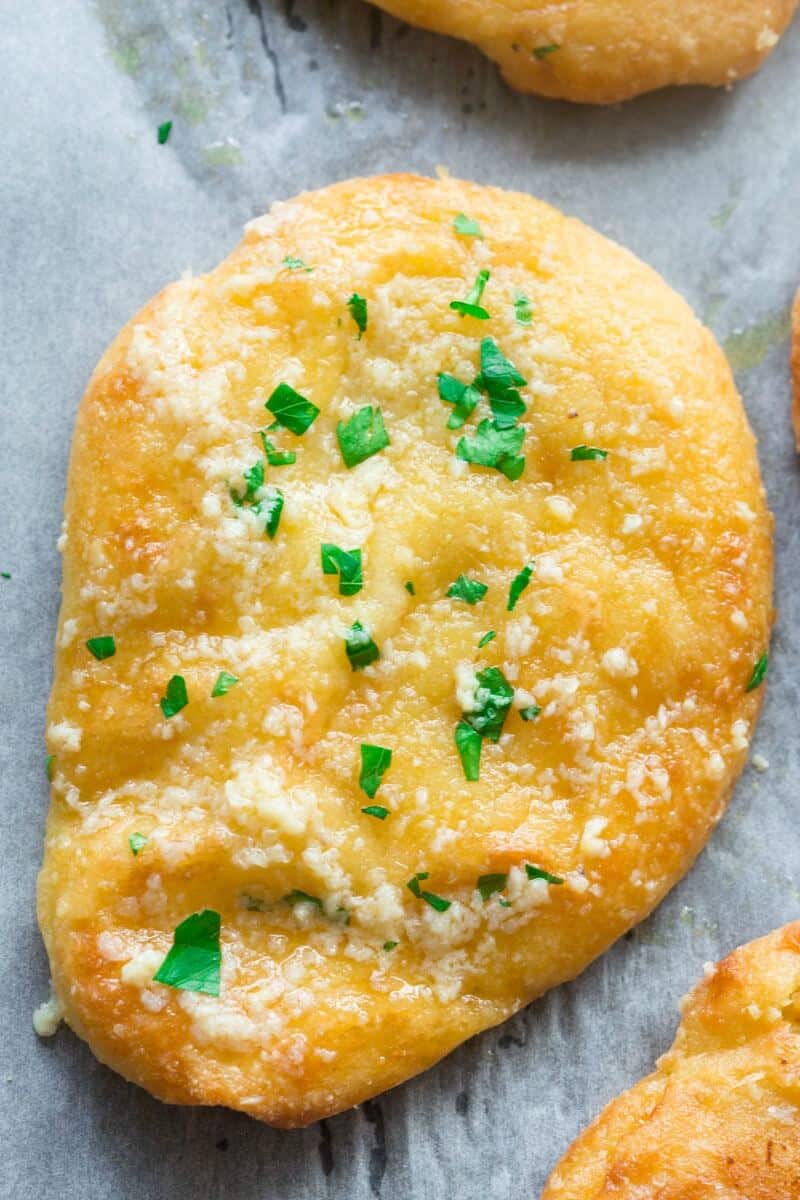 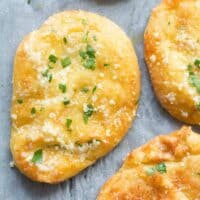 To make a garlic butter, combine 3 tablespoons melted butter with 1 tablespoon minced garlic.  TO STORE: Leftover naan can be stored in the refrigerator to enjoy later. Be sure it is covered completely. It will keep well for up to 1 week. TO FREEZE: Freeze leftover naan by placing them in ziplock bags, or a shallow container. They will freeze well for up to 2 months. Recipe loosely adapted from here.