Soft, fluffy and delicious homemade naan bread made with just TWO ingredients! This 2 ingredient dough naan bread is healthier than traditional naan and takes less than 10 minutes to make- no yeast! 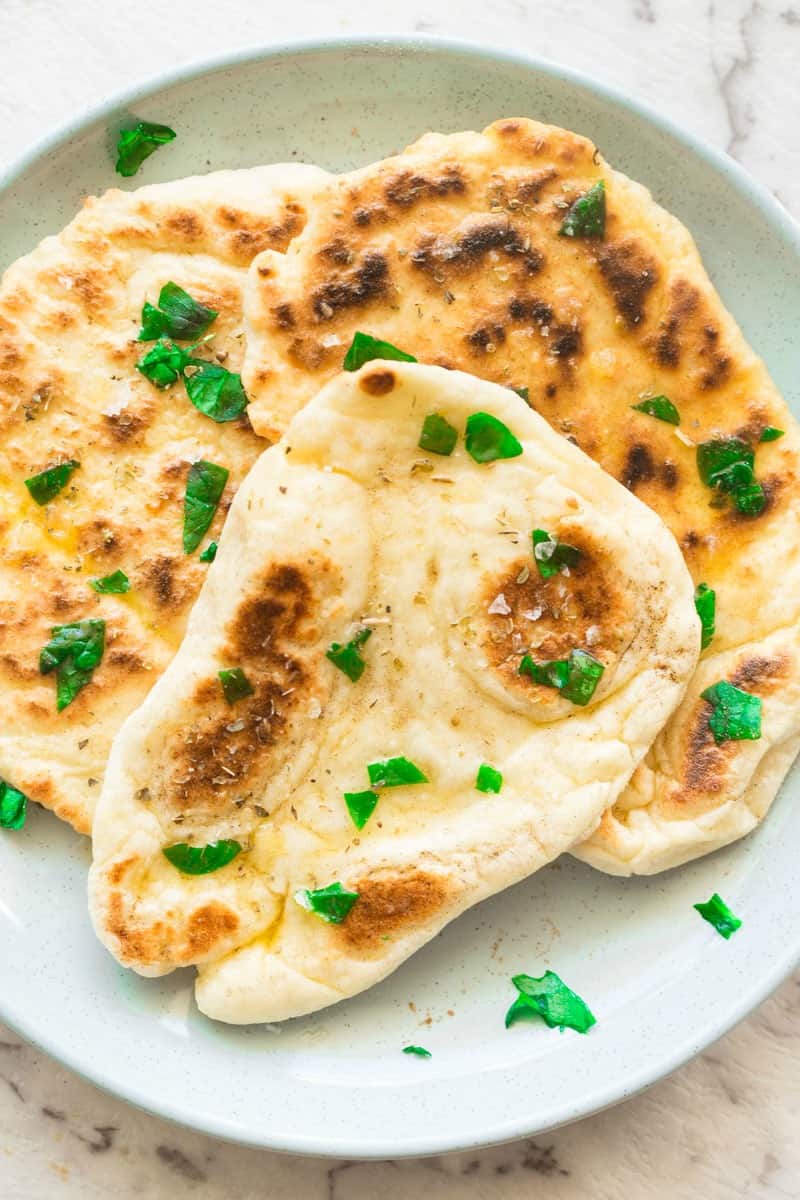 After stocking up on a bunch of pantry friendly ingredients, I found myself to have a plethora of self-rising flour.

Now, don’t get me wrong. I didn’t go out and buy this particular type of flour as if you look through my recipes, it’s not a flour I regularly use.

I often stick to grain-free and low carb flours, like coconut flour and almond flour.

However, as a means to make use of my pantry staple ingredients, I’ve been digging through it over the past week!

After a curry craving last night, 2 ingredient dough naan bread had to be next!

What is naan bread?

Traditional naan bread is a staple bread in many East Asian countries, like India and Sri Lanka. It’s leavened and most often baked in the oven.

It’s generally made with flour, yeast, salt, and water.

Enjoyed with curries, stews and on their own, they make a fantastic side dish or a substitute for a pizza base!

In this recipe, we don’t bake the naan bread but instead, dry fry it (pan fry it without oil). This makes is SO much quicker.

Taste-wise, naan bread is mild and doughy, and with a slightly more salty flavor than standard bread.

Texture-wise, it is doughy, fluffy and slightly tender on the outside- you MUST enjoy it warm!

Depending on where in the world you are and how you make your naan bread, it can be healthy. More often than not, it is what you eat WITH the naan bread that can tip it in the direction of unhealthy.

While traditional naan bread tends to be coated in oil or butter, my version is healthier than the original and virtually fat-free! 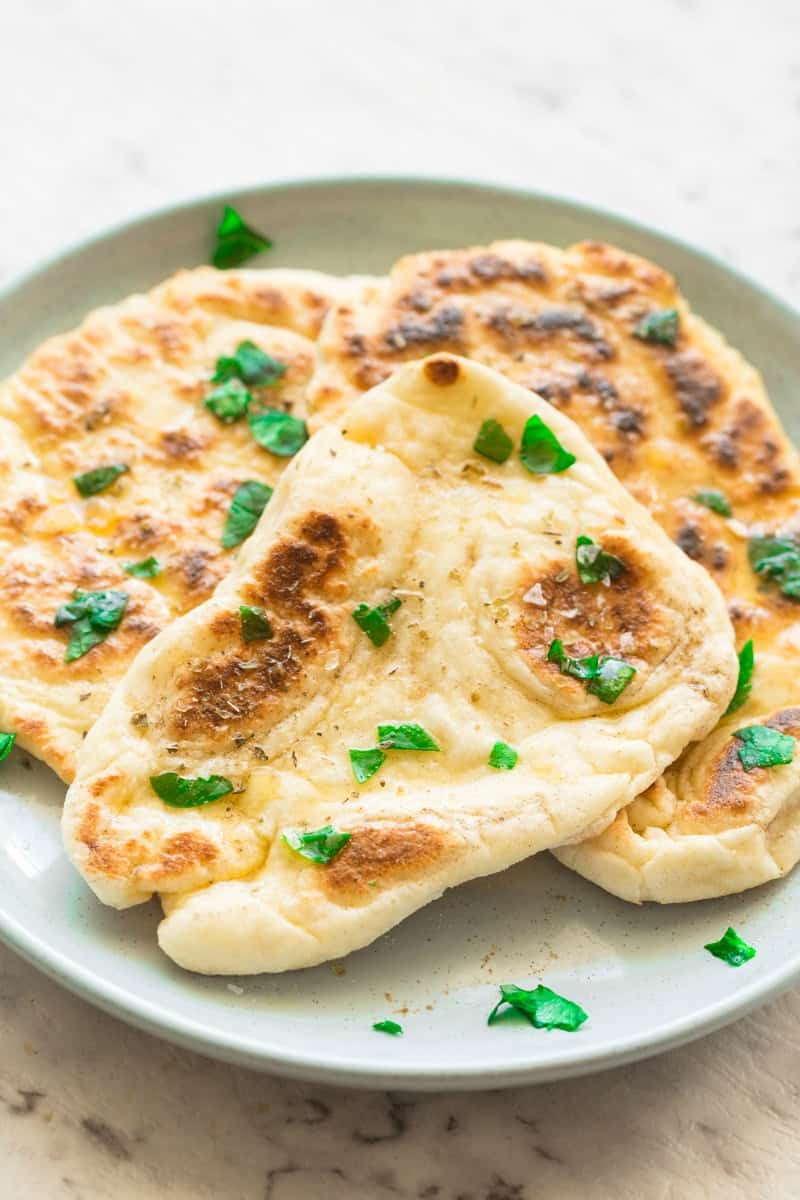 How to make naan bread from scratch

Making naan bread from scratch is SO simple. As it contains no yeast, it literally takes less than 10 minutes to make a batch!

No crazy mixing bowls or kitchen gadgets needed at all!

In a large mixing bowl, you’ll want to combine your flour, salt (if using it) and Greek yogurt and mix until combined. If you like, use your hands to mix in the dough until fully incorporated. Form a big ball of dough.

Finally, you will heat a large non-stick pan on medium heat. When hot, place one piece of naan dough onto the pan and cook for 2-3 minutes, before flipping and cooking for another 2 minutes. Repeat until all the dough has been used up and 8 naan bread remains!

If desired, brush the tops of the naan bread with melted butter or oil. 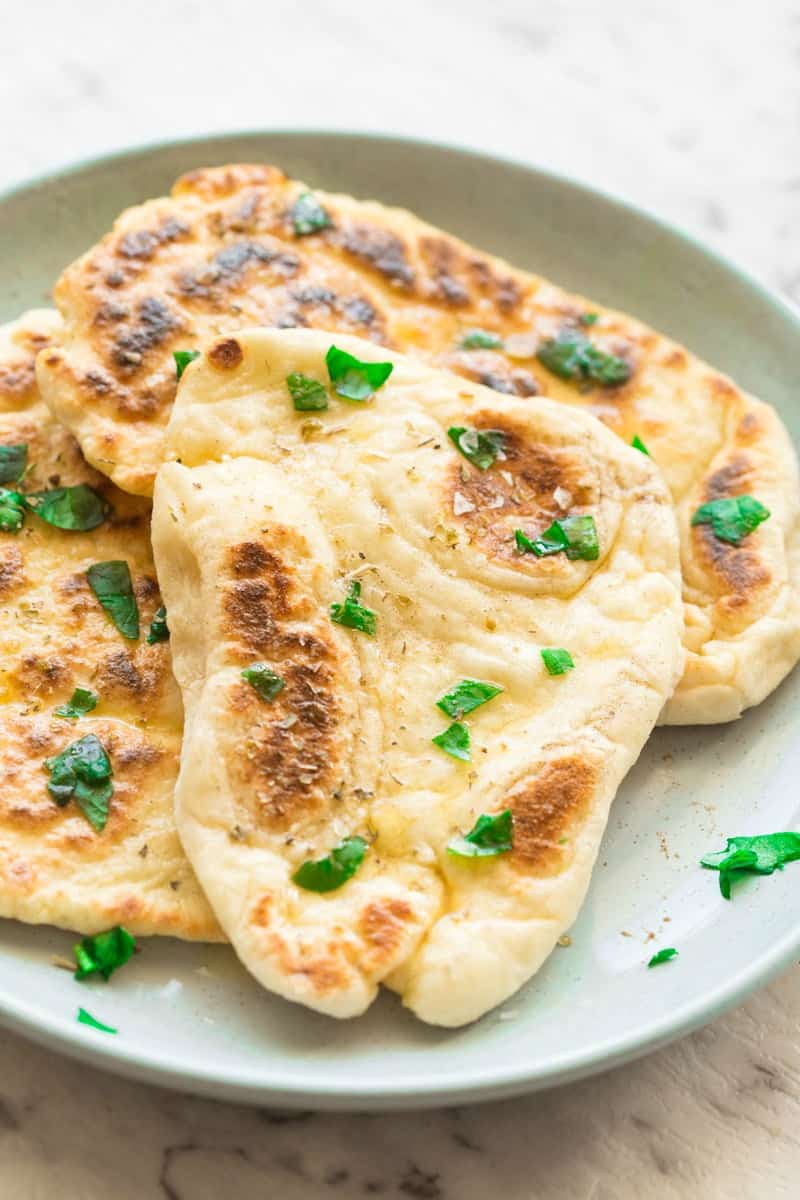 What can I use instead of yogurt in naan bread?

Sour cream works in the same way Greek yogurt does, as it is thick and holds together. You can substitute the Greek yogurt with sour cream.

Is naan bread vegan and gluten-free?

If you don’t follow any of those diets, stick to Greek yogurt and standard gluten-free self-rising flour.

Can you refrigerate and freeze naan bread?

If you plan to enjoy the naan bread within 3 days, there is no need to refrigerate it.

To refrigerate: You should avoid refrigerating the uncooked dough, as it will become stickier the longer it sits. You will need to add extra flour to make it durable to form into naan bread.

If you have leftover naan that you don’t want to enjoy immediately, you can refrigerate it to enjoy later.

Place leftover naan bread in a ziplock bag and be sure to enjoy them within 7 days.

To freeze: Cooked naan bread is freezer friendly. Place the naan bread in a ziplock bag. They will keep fresh frozen for up to 6 months.

To reheat: Allow frozen naan to thaw to room temperature. Either reheat in the microwave or crisp up in the pan.

What to eat or serve with naan bread

Traditional ways to enjoy Naan bread is to enjoy it as a side, but here are some other suggestions- 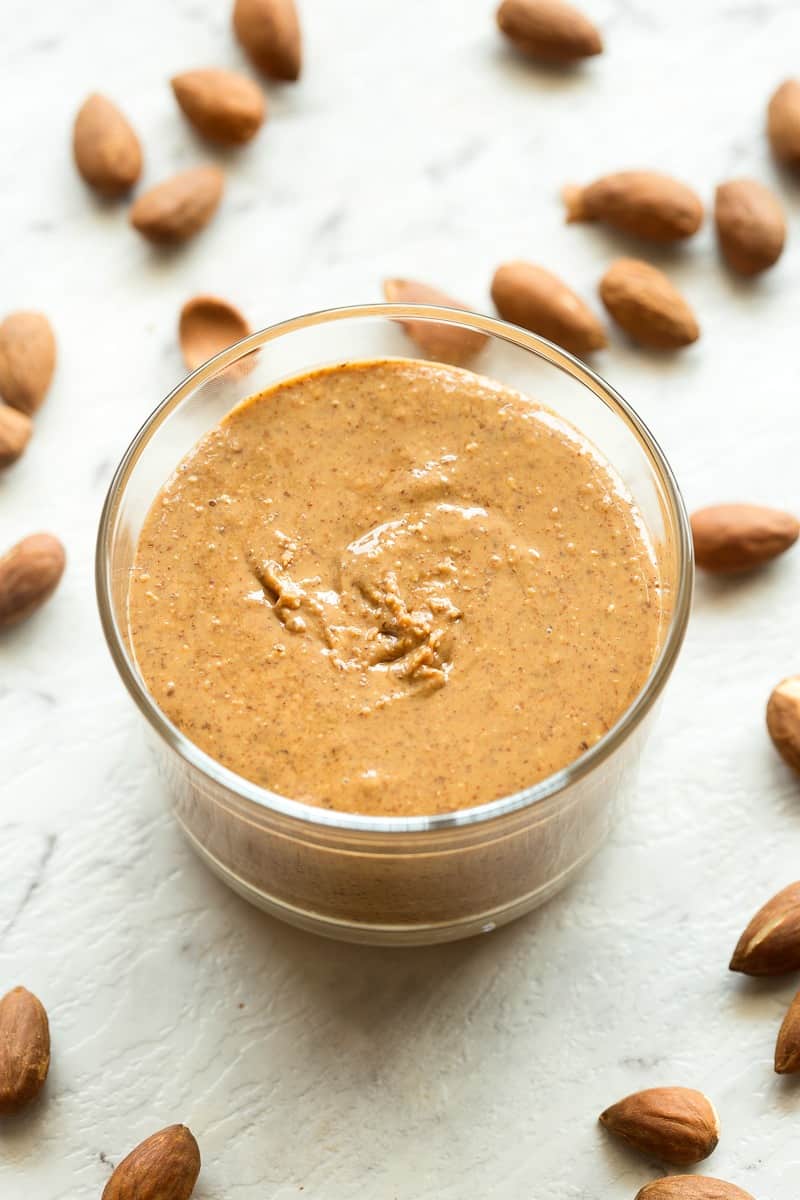 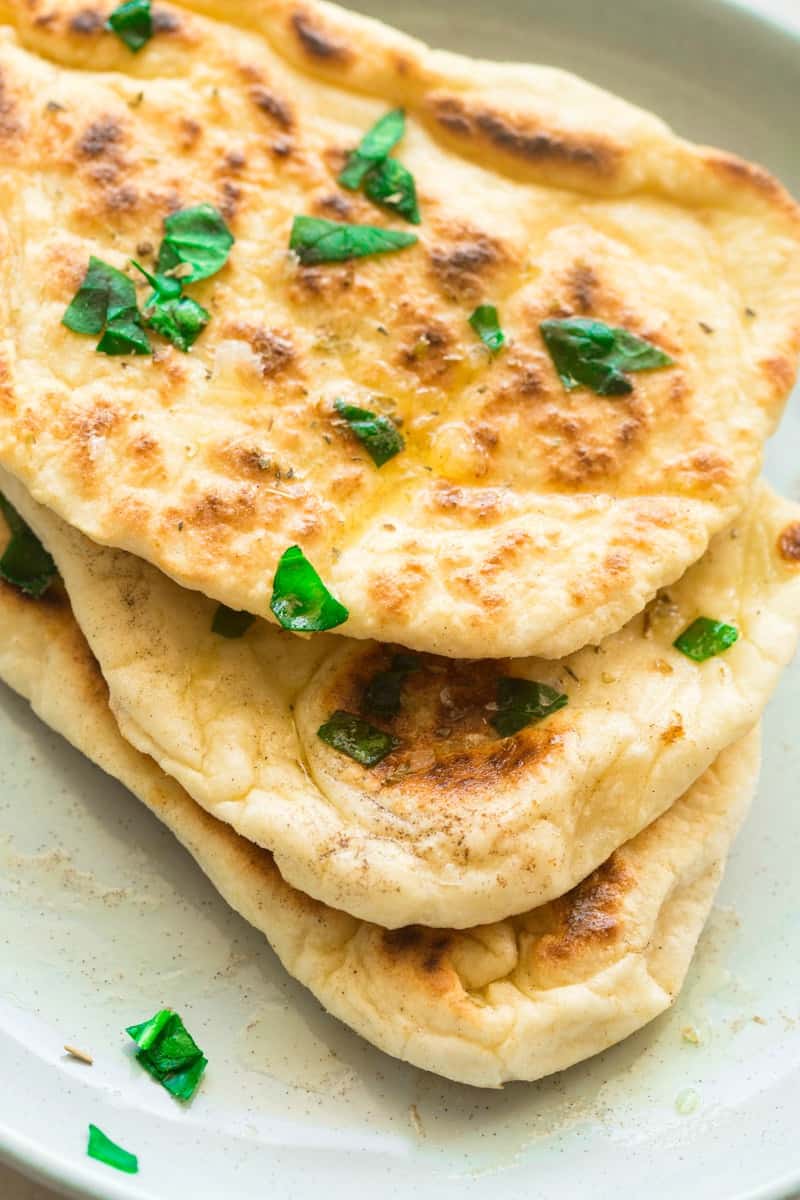 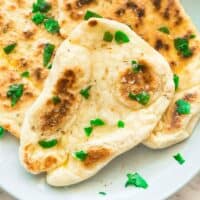 See post for all Yogurt and Flour options. This recipe will NOT work with almond flour or coconut flour. It must use self-rising flour. To make your own, click here.