If my pancakes aren’t thick, fluffy and pillow-like, we’re going to have a problem.

Ever since I mastered the art of learning how to make low carb pancakes without protein powder, the game has changed.

These fluffy low carb cinnamon roll pancakes come in two versions- A flourless version (which is vegan and gluten-free) and a keto and paleo friendly version.

Both are super thick and fluffy

Quick and easy to whip up

However, it wasn’t an easy road to get here. 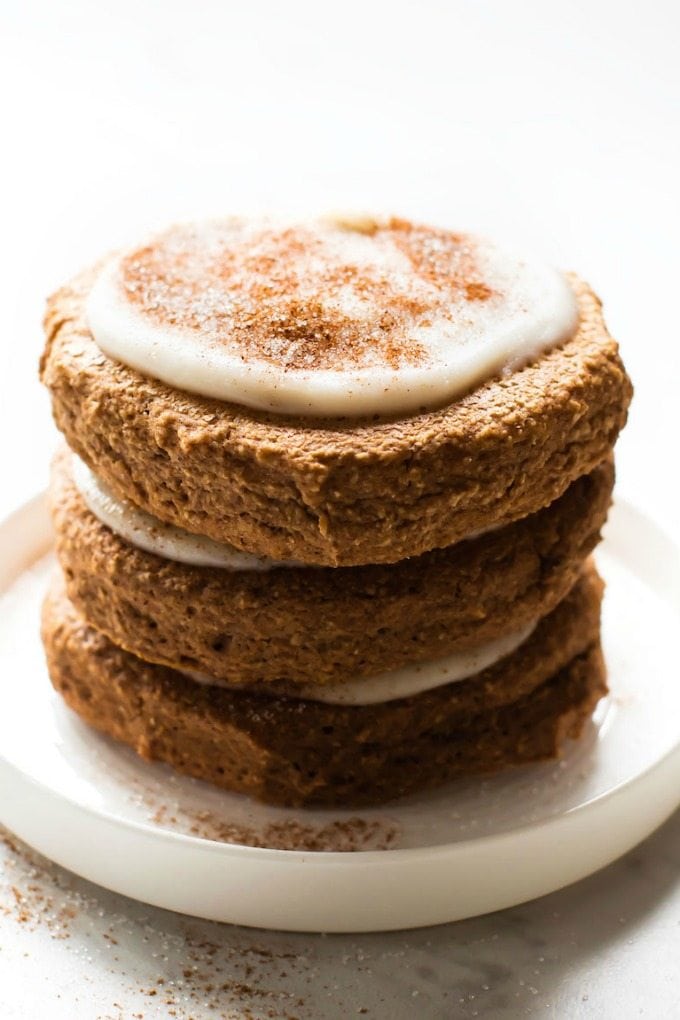 Based on reader feedback, my original low carb pancakes have either been a massive hit or they’ve gone the opposite direction.

As much as I preach to cook them on low heat and covered, there is one ingredient that can make or break the recipe- Coconut flour.

I’ve tried many coconut flour brands over the last few years and I can confidently say that no brand is the same. Some brands require a smaller amount of liquid (milk, water, etc) yet others will see you continue adding more and more until it reaches the desired consistency.

Furthermore, the vegan option was included in the recipe and was also hit or miss. To combat this AND be able to provide to both audiences, I’m sharing two options for these fluffy cinnamon roll pancakes-

The vegan/flourless + gluten-free version- Using rolled oats or quinoa flakes, and without any eggs or dairy needed. 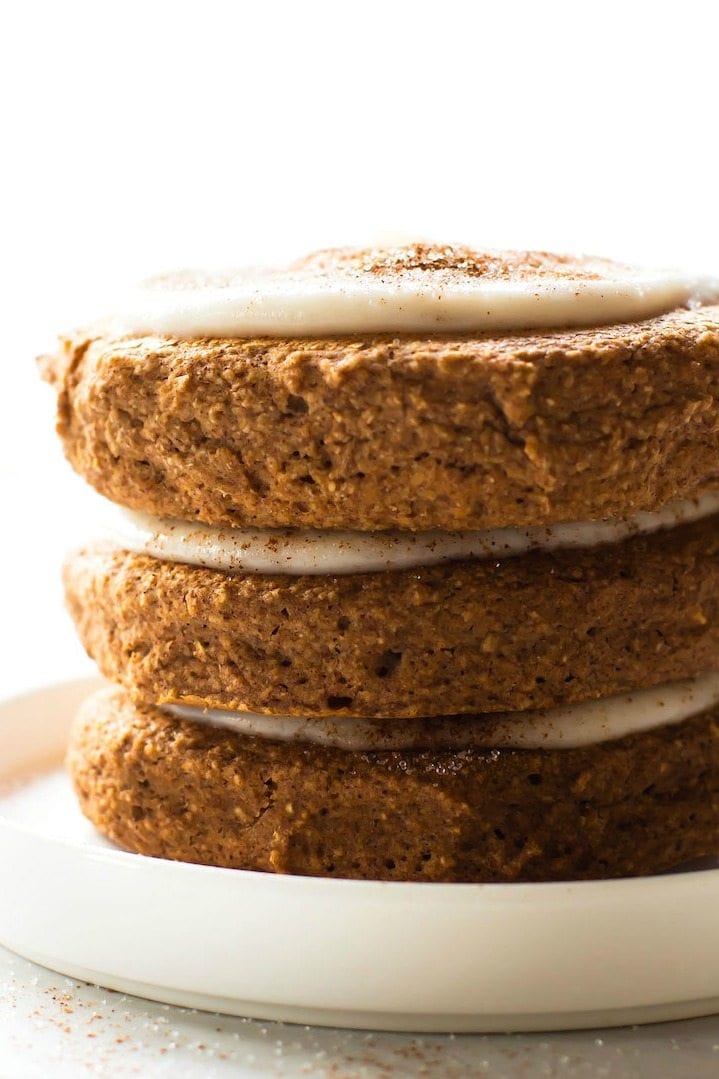 Coconut flour is indeed considered a low carb flour and is a popular ingredient amongst the paleo, low carb, and keto communities.

Like coconut flour, almond flour is also very low in carbs but is able to mimic the texture of traditional flour much easier. Aim for finely milled or ground almond flour as opposed to the almond meal, which can be a little more coarse and gritty.

For the low carb keto version, you’ll use a combination of almond flour, coconut flour, and eggs. I’ve found that the addition of eggs really does give these pancakes the perfect texture- Cake like and fluffy.

For the flourless, vegan and dairy-free version,

I personally prefer rolled oats, as the taste was very similar to a traditional flour-based pancake. Using ground quinoa flakes (or quinoa flour) did yield a slightly better texture, but I could definitely tell that there it was quinoa based. 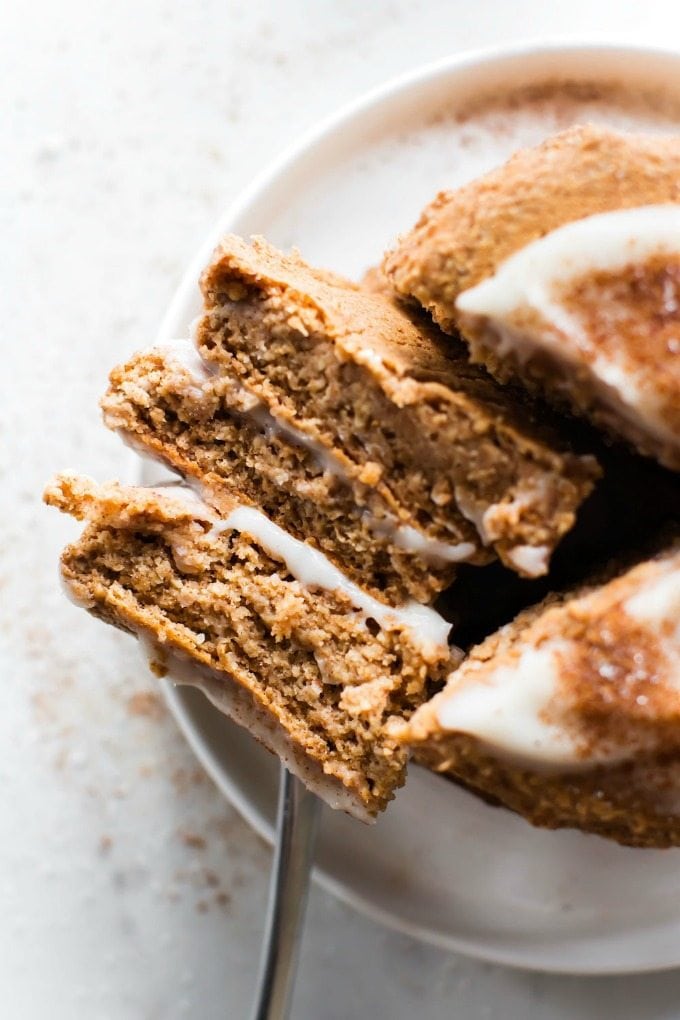 BONUS! These fluffy cinnamon roll pancakes are freezer friendly- Simply batch cook extra and freeze them in ziplock bags. To reheat, either thaw in the microwave on medium power or reheat in the greased pan (from a thawed state, for 2-3 minutes).

More delicious pancake recipes? These are the reader favorites! 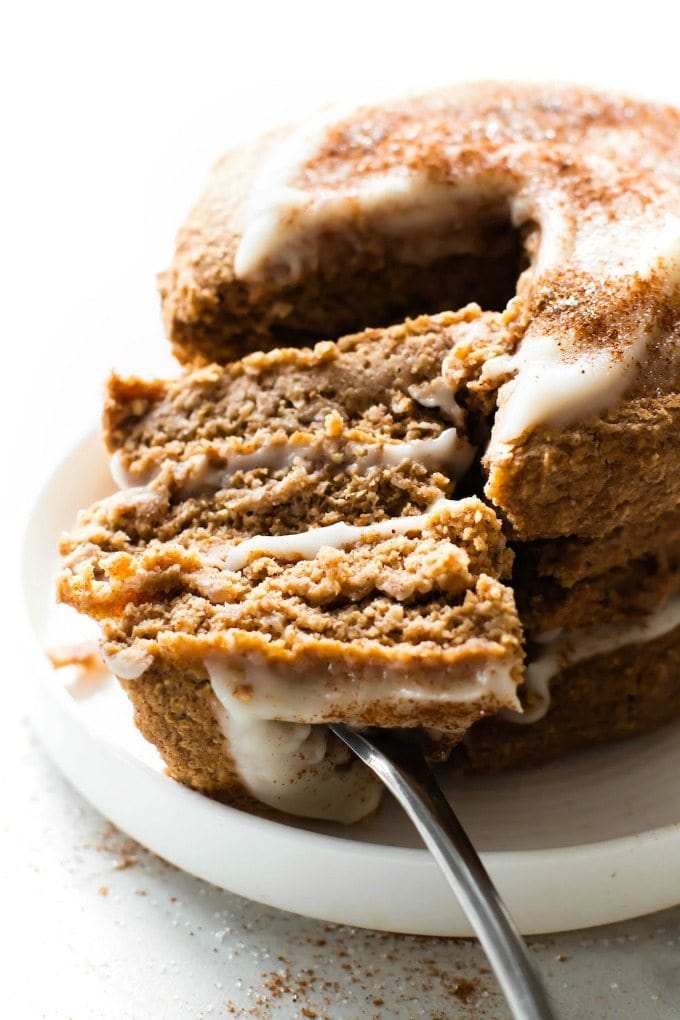 Watch how to make fluffy pancakes below! 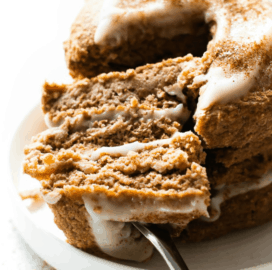 For the sticky cinnamon roll glaze