A delicious no bake, high protein snack which takes less than 20 minutes to whip up- Perfect for snacking between meals or before and after a workout! Gluten free and very low in sugar too!

Niki has never been one to stick to any fitness regime or plan and would consider sitting on a couch with her legs up ‘leg raises’. The other morning, she suggested we take a spin class together and being the epic brother I am, I agreed to tag along. When we arrived, the spin class was cancelled and Niki suggested we have our own spin class using the bikes available for public use.

A note to all of you- Sitting on bike with an iPhone in one hand and eyes glued to the latest episode of the Kardashians is NOT a workout. It’s punishment.

Even worse is the fact that both our legs were using the pedals as a foot rest.

Clearly Niki’s notion of fitness is not mainstream….until now. 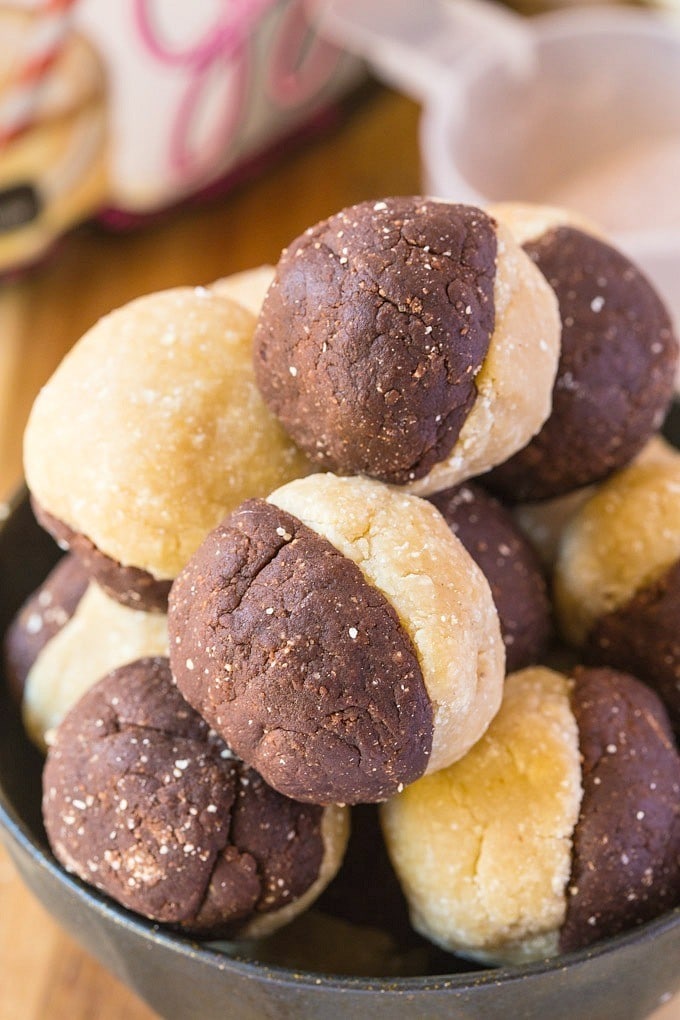 A little over two months ago, she started her first fitness program- Jamie Eason’s live fit Trainer. For those unfamiliar with it, it is a 12 week structured workout and nutrition program aimed to build endurance and strength in the gym. I’m proud to say she has the workout side down pat but as for the nutrition side- It’s a work in progress.

Ironically, the team from Labrada reached out to be a while back to try out Jamie Eason’s Whey protein isolate in the chocolate and in the vanilla flavours. Being a fan of protein powders, I was definitely game. Even though this protein powder was tailored for the female fitness fan, the name didn’t stop me and I HAD to use it with some baking because let’s be honest here- I rarely use protein powder in a shake.

When they asked me to create a recipe for them using their protein powders, I had Niki in mind and her new fitness endeavours. Although she isn’t following the standard Livefit nutrition plan, she definitely is making an effort to up her protein (she tried to tell me if she ate potato chips with dark chocolate, the potato would be considered the protein out of the two. Not going to lie- I like that reasoning).

Being a fan of the nutella breakfast cookie dough, I adapted that texture and taste to create something similar with an added protein boost. 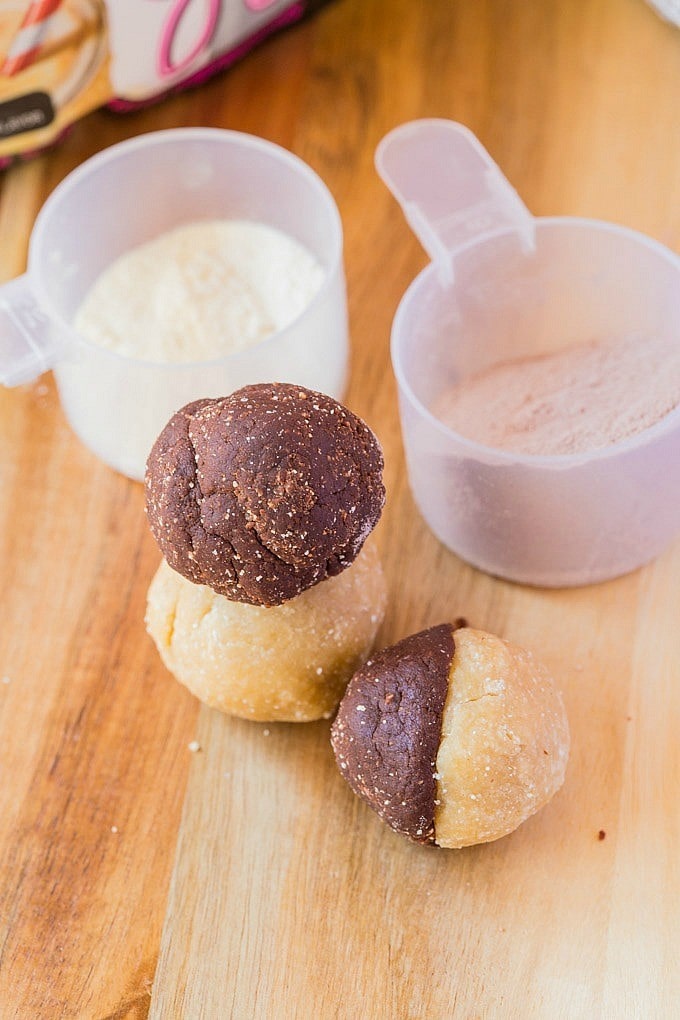 Earlier in the week, I posed one of life’s most important questions on Facebook– Team chocolate or Team vanilla. It was an even 50/50 but I already had the solution in mind- Use both. What better way to do that than with both Jamie Eason’s Vanilla Whey and Chocolate Whey? Big Props to Lee who had this genius idea to combine the two flavors- Check out her recipe here!

These Vanilla Chocolate Protein Cookie Dough Balls cater for team vanilla, team chocolate and team greedy– The one’s who like the best of both worlds. These Protein Cookie Dough Balls are the perfect snack between meals (like I’ve been eaten them) or as a pre or post workout snack (as Niki has been eating them). They are so simple to whip up and take less than 20 minutes. It’s slightly longer to make because you make a batch of the chocolate protein cookie dough and a batch of the vanilla protein cookie dough. You form into balls then slice them down the middle and BOOM- Half vanilla, half chocolate. For those who are loyal to one of those teams- No stress. Just keep it one flavour because it’s still damn delicious. 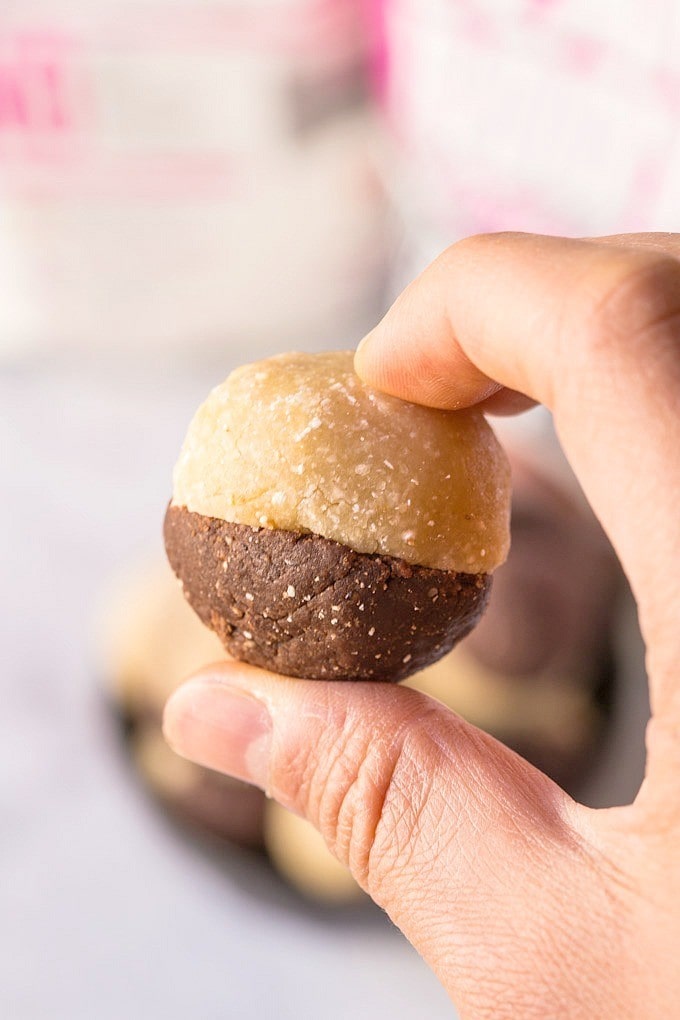 Thank you to the amazing team at Labrada for providing me with this new protein powder- You’re doing something right because Niki hasn’t complained.  I can’t wait to keep experimenting with this delicious protein powder! 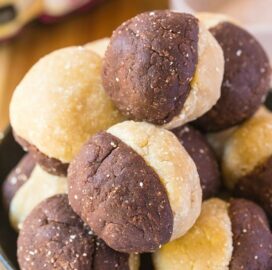 A delicious no bake, high protein snack which takes less than 20 minutes to whip up- Perfect for snacking between meals or before and after a workout! Gluten free and very low in sugar too! Vegan option too!
No ratings yet
Print Rate
Author: Arman @ thebigmansworld

* Use a tablespoon at a time and eyeball the batter. You may need more/less liquid.
These protein cookie dough balls can be kept at room temperature for up to a week or refrigerated for up to a month. Adapted from Nutella Breakfast Cookie Dough
Tried this recipe?Give us a shout at @thebigmansworld or tag #thebigmansworld!

Are you team chocolate or team vanilla?

Do your siblings have a similar fitness regime to you?