Healthy Vegan Coconut Brownies- A thick, fudgy flourless brownie base topped with an addictive layer of thick coconut crack! Made with no eggs and no sugar, they are the best healthy dessert- Paleo, Keto, Low Carb, and Gluten Free.

After hitting a little recipe slump the last couple of weeks, I’m back with an easy recipe combining two of my favorite things- Brownies and coconut! 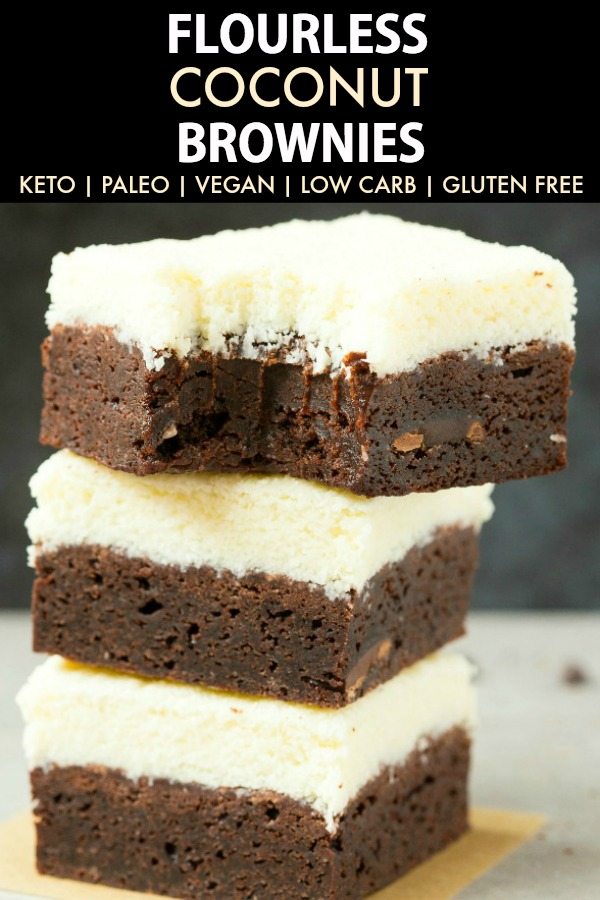 Flourless brownies have been one of my favorite desserts (or even protein-rich snacks) to share on The Big Man’s World. Not only are they a personal favorite, but you guys seem to love them just as much as I do!

Brownies have an unfair stigma for being calorie and sugar bombs, but I disagree. When baked using different ingredients and adapting to smart swaps, it is easy to recreate a healthy alternative, without sacrificing on taste!

These easy coconut brownies are made with almond meal and NO coconut flour- something you guys have requested multiple times. Although I am a huge fan of using coconut flour in my recipes, brownies are ONE kind I try not to use it with. 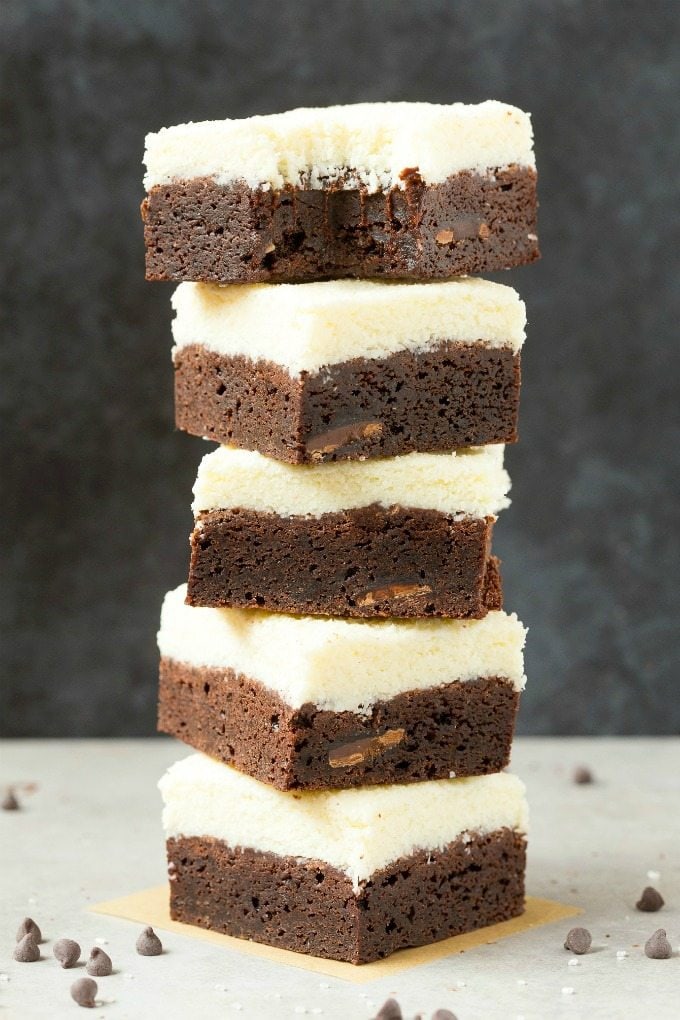 To make these coconut brownies, you follow an easy 4-step process-

I mean, you really could just leave it at the brownies part, but adding the healthy coconut layer takes it up a notch. Not only that, but the coconut layer (because it is firm and not creamy) can easily be removed to be eaten as a two-parter- Win-Win!

The brownie base is 100% adaptable to be made lower in fat, higher in protein, or a combination of both. I prefer using one of the two mentioned above as they have the traditional brownie taste and texture (ultra fudgy, crinkly tops!), but the ones below work just as well! 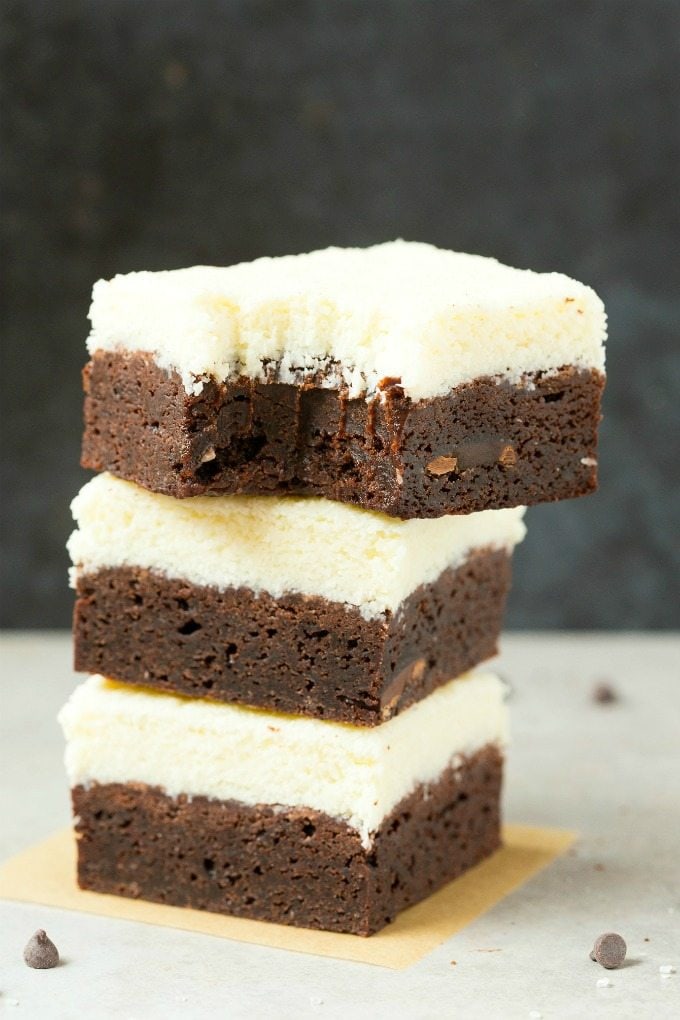 Almond meal- Instead of using a wheat-based flour or white flour, I made the brownie base using this. It is low carb, high fiber and has a delicious light flavor.

Nut or Seed Butter- Using nut or seed butter in the brownies replaces the need for any oil or butter! Nut and seed kinds of butter are high in protein, fiber and healthy fats- The perfect trio. Be sure to use a sweetened chocolate kind for the recipe, otherwise, your brownies will be bitter!

Unsweetened shredded coconut– Many packaged coconut is pre-sweetened, so use the unsweetened kind- you’ll cut the sugar, carbs and unnecessary ingredients out of it! 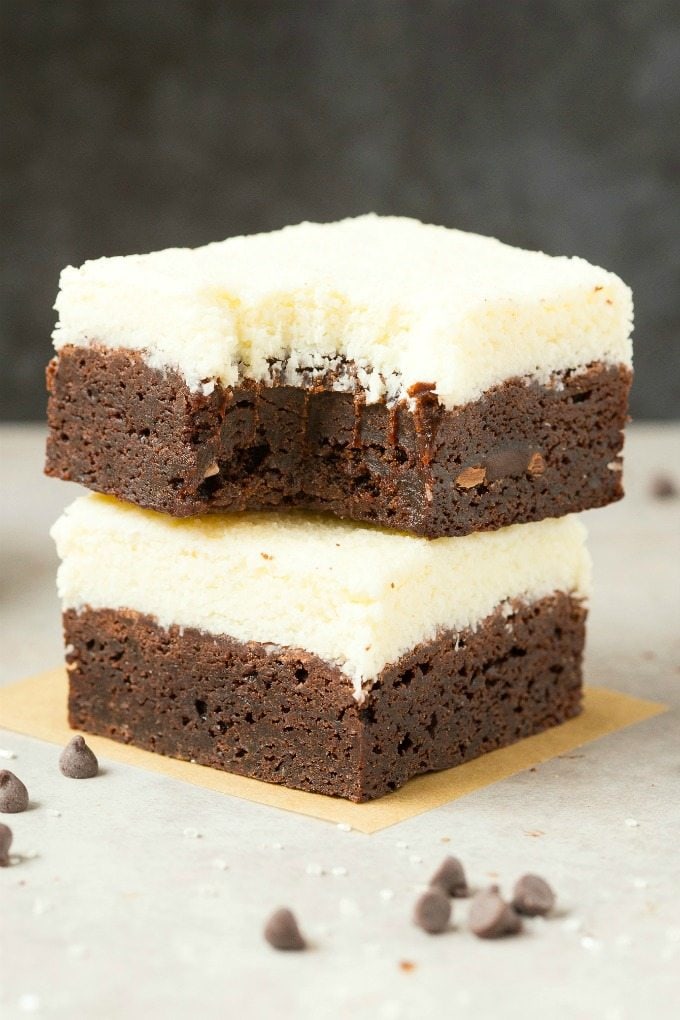 These healthy coconut brownies are so quick and easy to whip up, you have no excuse not to satisfy your sweet tooth in a healthy way! Dessert, snack or post-workout treat- This has all your bases covered! 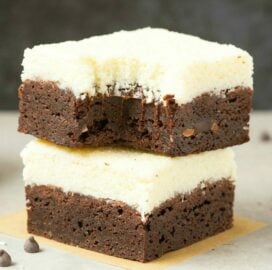 For the brownie base

For the coconut layer