This keto apple crisp is the ultimate cozy and comforting dessert that uses a secret ingredient to keep it low carb! No apples, no sugar, and no grains needed, it takes MINUTES to prep and turns out perfect every time!

When it comes to keto apple desserts, there’s a couple I have up my sleeve. If I’m not whipping up a keto apple pie, then I’d definitely be making this keto apple crisp.

There are a handful of desserts that bring me back to my childhood. My mom always had several dessert recipes up her sleeve that she could whip up in seconds. While I love all the desserts she makes, nothing beats her apple crisp.

Traditional apple crisp or apple crumble is not keto friendly. Apples are one of the higher carb fruits, and even a minimal amount used in a recipe could kick someone out of ketosis. Luckily, with a few simple swaps and a secret ingredient, you can enjoy this family favorite dessert as part of your low carb diet!

I’ve been meaning to share a keto apple crisp recipe for quite some time. It’s been one of my favorite comforting desserts and reminds me so much of an actual apple crisp. It needs a handful of ingredients and takes minutes to make. Instead of using apples, we use chayote squash, which has the same texture as apples. To give the crisp some apple flavor, we sneakily add a few drops of apple extract.

No grains and no eggs are needed, but you’d never tell. The filling texture is soft and moist, and the crumb topping is crispy and crunchy. The apple crisp is sweet and full of apple and spice flavor, without any apples whatsoever!

What I love about this recipe is just how much it resembles the original dessert. I made one and brought it over to my mom’s place for dessert and NO ONE could tell the difference- it is THAT good!

For the apple filling

For the crisp topping

How do you make a low carb apple crisp?

Start by preparing your filling. In a deep pan or large saucepan, melt your butter. Once it has melted, add your squash and mix well. Once mixed, add your water and cover the pan. Cook the squash for around 7 minutes, until soft and tender. Remove the lid and add the remaining ingredients and mix well, until combined.

Next, transfer the crumble mixture into a large baking dish and bake for 8-10 minutes, or until warm. While it is baking, prepare your crisp topping. Combine all your ingredients into a mixing bowl and mix well.

Apples are not considered a keto friendly fruit, as they contain too many sugars and net carbs. A medium-sized apple contains 20 grams of net carbs, which could easily be someone’s daily net carb allocation.

Is apple crisp the same as apple crumble?

Apple crisp and apple crumble are essentially the same desserts. Crumbles tend to use oats in their topping whereas crisps can use a combination of nuts and seeds, along with almond flour.

Granny smith apples are not low carb. Although they have less natural sugar due to their tartness, the net carbs remain the same.

How many carbs are in a green apple?

There are 25 grams of carbs and 4 grams of fiber in a medium green apple. 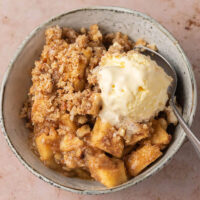 For the crisp topping

* This makes around 1kg/2 lbs chopped squash. You can also use yellow squash or zucchini.  TO STORE: Leftovers can be stored in the refrigerator, covered. It will keep well for up to 1 week. TO FREEZE: lace the cooled crisp in a shallow container and store in the freezer for up to 6 months.  TO REHEAT: Apple crisp should never be microwaved. Place the crisp in a preheated oven and heat up until warm.