These easy keto cinnamon rolls are perfectly soft and fluffy in the middle and require NO yeast to make! Ready in just 20 minutes, they are topped with a simple and sugar free cream cheese frosting.

Weekend breakfasts are a BIG DEAL in my family.

Even since going keto, they’ve made an effort to go that extra mile. Instead of the typical bacon and eggs, they whip up some breakfast cookies, breakfast muffins, and when the weather cools down, keto oatmeal.

However, the creme de la creme of all breakfasts would have to be cinnamon rolls. If there is one way to make sure people are out of bed and at the dining table in record time, have your home smelling like cinnamon rolls!

Now, besides my sister and I, no one else follows a low carb diet, but even my parents are obsessed with these. My father considers himself a cinnamon roll connoisseur and even he thinks these are up there with the best.

Why this keto cinnamon roll recipe will also leave you mesmerized-

What I love about this recipe is just how much they look and taste like real cinnamon rolls. Don’t let the ingredients fool you into thinking otherwise- My family and many of my friends have tried it and they could NOT believe these were low carb. In fact, my mom reckons they taste just like Cinnabon!

How do you make keto cinnamon rolls?

Start by whisking together the almond flour, baking powder, and sweetener in a small bowl and set aside. In a microwave-safe bowl, add the shredded mozzarella cheese and cream cheese and microwave in 20-second spurts until mostly melted, then whisk them both together until smooth.

Next, transfer the melted cheeses into a food processor, add the eggs and the dry ingredients, and mix until the dough is smooth. Transfer the dough onto a flat kitchen surface and roll it out into a large, rectangular shape. Brush with the melted butter, then sprinkle with the brown sugar substitute and cinnamon. Roll the dough into a large log and using a sharp knife, slice it into 12 pieces.

Now, transfer the rolls into a greased 8 x 13-inch baking dish. Bake the cinnamon rolls for around 20 minutes, or until the dough is cooked and the tops are lightly golden.

Finally, prepare the frosting by whisking everything together until the desired thickness is achieved. Spread over the tops of the still-warm cinnamon rolls then serve immediately.

Can I make these keto cinnamon rolls overnight?

These cinnamon rolls aren’t the best to be prepared the night before. They have no yeast or wheat to provide stability. You can, however, prepare these rolls up to 3 hours in advance.

How many carbs are in a Pillsbury cinnamon roll?

A single Pillsbury cinnamon roll contains 24 grams of carbs and over 9 grams of sugar.

Does Cinnabon have keto?

Cinnamon does not have any keto-approved or keto-friendly products. All of their cinnamon rolls and variations are extremely high in carbs, with most averaging around 75 grams of carbs per serving.

Is cinnamon okay on a keto diet?

Cinnamon is a fantastic spice to incorporate into a ketogenic diet. It has barely any calories and almost zero carbs. It’s perfect to sprinkle over oatmeal or use in baking, like keto banana bread, muffins, and cinnamon bread. 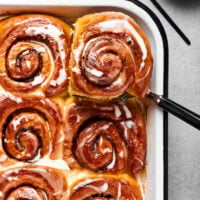 * You may need more if you prefer a thinner frosting. TO STORE: Store leftovers in a sealable container, in the refrigerator. They will keep well for up to 5 days. Any longer and the glaze will begin to seep into the rolls. TO FREEZE: Place cooled cinnamon rolls in a ziplock bag and store them in the freezer for up to 2 months. If possible, keep them unfrosted. TO REHEAT: Microwave the cinnamon rolls in 20-second spurts until warm.