These crispy, high protein baked falafel muffins are completely vegan and gluten free! Naturally low in fat, these healthy savoury bites are low in fat and the perfect snack or meal addition. 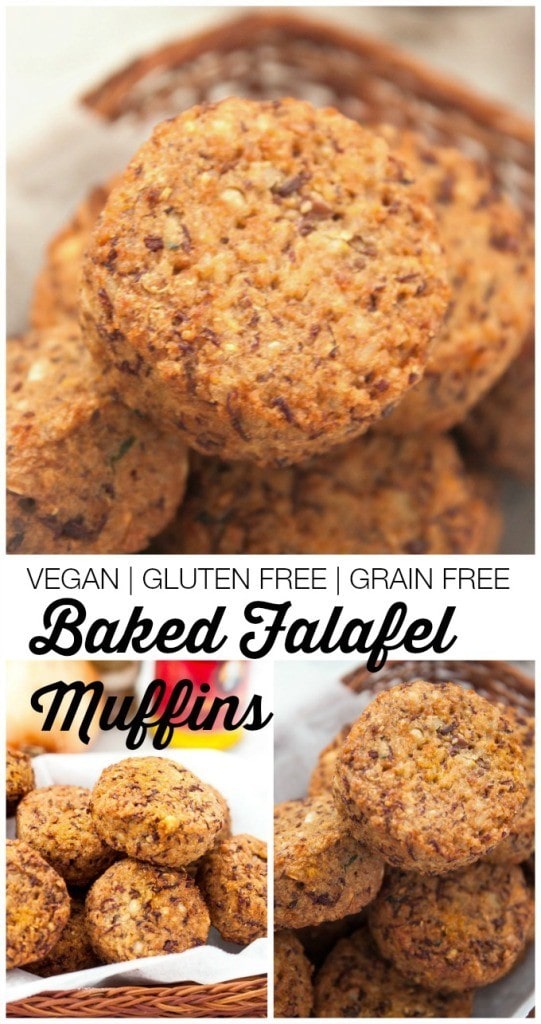 There are two foods which are constantly used in recipes, meals and daily eats around the healthy living blogging world which I have never been the biggest fans of.

It’s not that I despise eating either of these or avoid them like the plague- If they were the last foods on earth, I would happily tuck into it. Actually, that doesn’t say much. 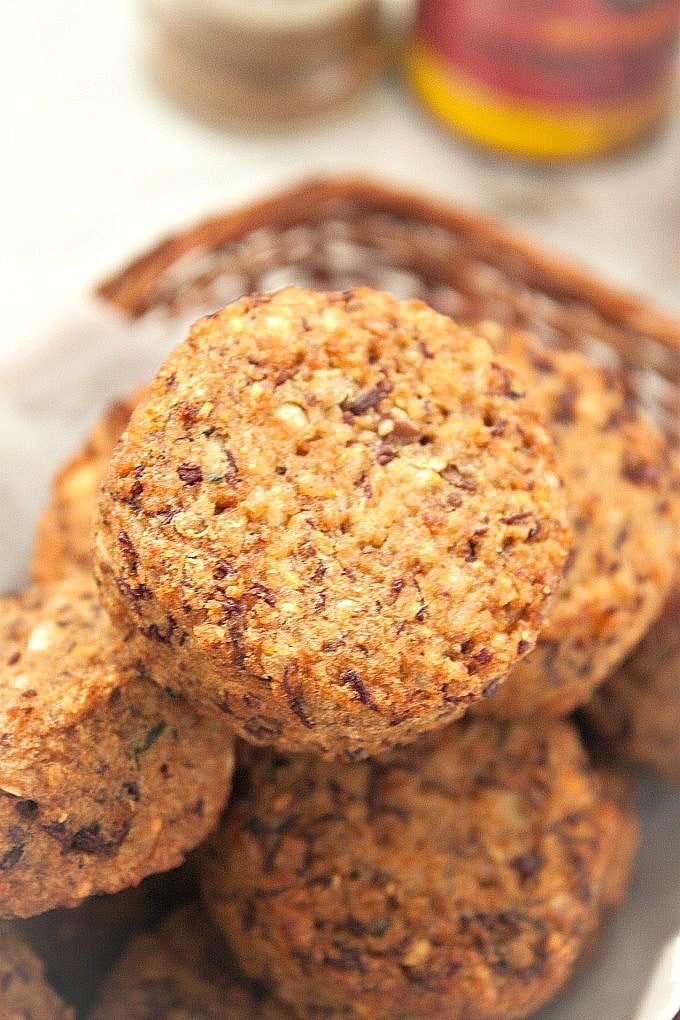 When it comes to the sweet potato, I prefer to eat it’s white family member. I don’t need to profess my love for the white potato. It’s not unusual for me to eat a kilo of these white spuds in a day. Heck, it even happened where I ate a seven kilos within a week. When I was in America for the first time, I was fortunate to be there during Thanksgiving and was given a sweet potato with marshmallows and brown sugar. I think that put me off them just a tad.

Let’s now talk chickpeas. Chickpeas, especially chickpea flour (garbanzo/besan flour) is something I did grow up with. Many of my mum’s traditional cooking involved using chickpea flour (expect an amazing recipe to come in the new year!) and there are a plethora of Persian stews which are based on slow cooked chickpeas. I love hummus but over the last few years, I’ve found the more basic the chickpea is, the more stomach pains. What does that mean? Well let’s put it simply.

A can of chickpeas eaten straight = A pregnant male look.

A falafel deep fried to a crisp = Yes. So much yes. 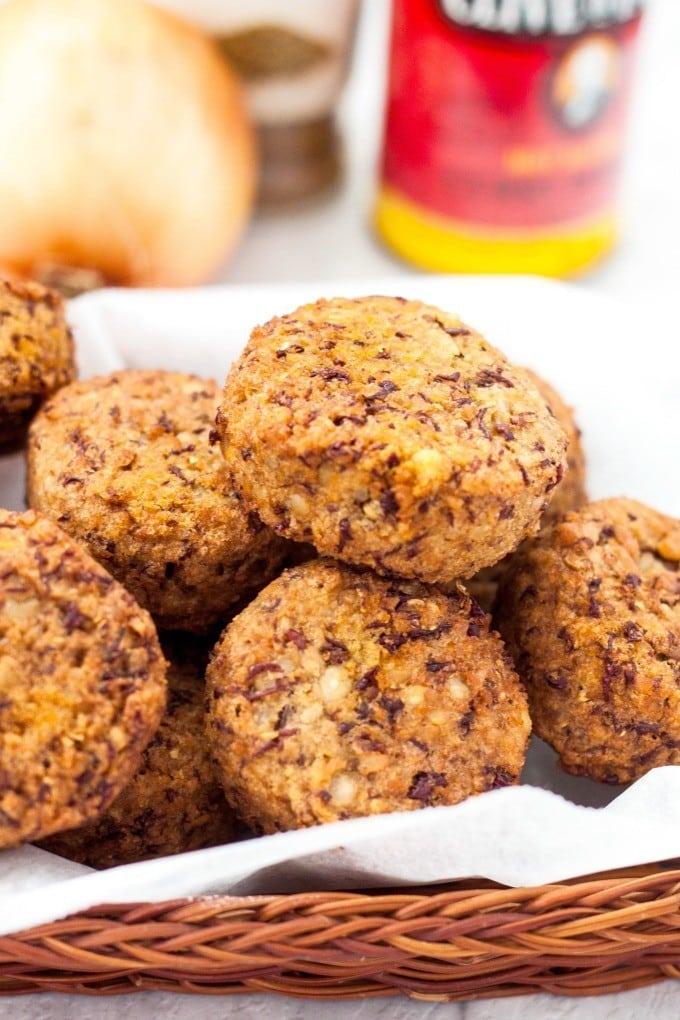 Safe to say, when I’m cooking for myself or out to eat, sweet potatoes and chickpeas are often overlooked. When I asked on Facebook what kind of recipes you guys wanted, Vegan and traditional family recipes were popular ones. For long time readers, you’d probably think it bizarre for me to post a vegan recipe, knowing my love for the animal protein. Ironically, one of my all time favourite recipes by mum is her pan fried Persian style falafel which is almost vegan!

I’d always know whenever she’d be making these delicious patties because the house would smell insane- A combination of curry spices mixed with copious amounts of liquid gold. No, not coffee- Oil.

When I graciously obtained the recipe from her and looked through the list, I was surprised to realise how simple it was. Instead of pan frying it like mum usually does, I wanted to see if they would work baked in the oven as ‘muffins’. This was because I was lazy and didn’t want to stand over the stove. It worked out well and formed perfectly! The other edit I did to her recipe was vegan-ise it by using a flax egg (hence the puuuuurty black spots throughout). A warning though- Make sure you grease the muffin tins VERY well– Let’s just say my first trail, I ate them with a fork straight out of the muffin tin…. 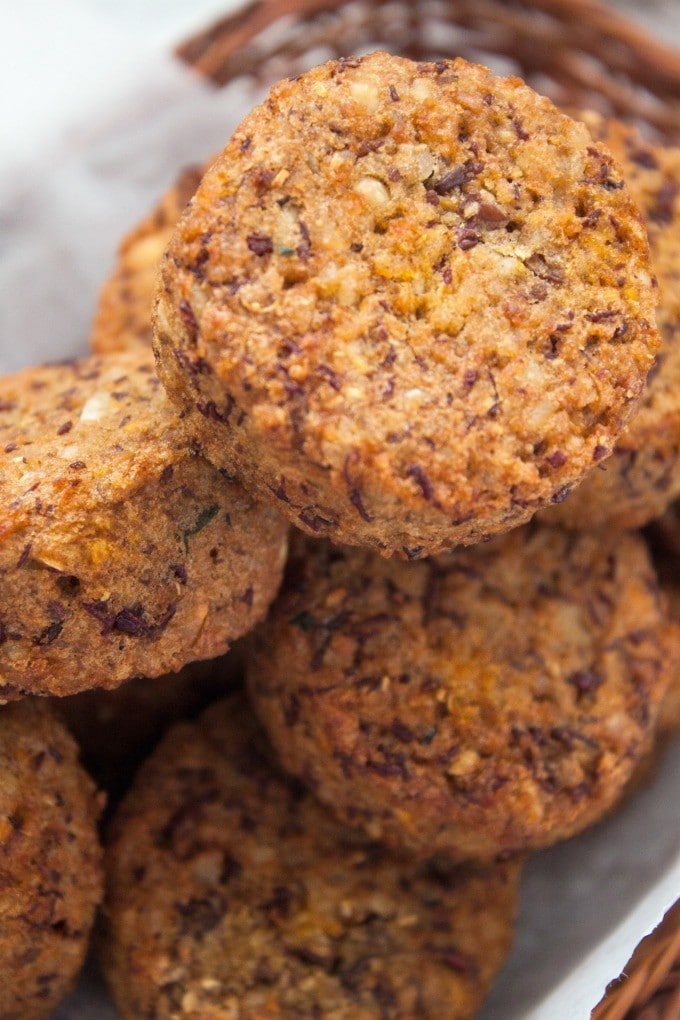 So while I may not be the biggest fan of sweet potatoes or chickpeas- Together, I’m their personal cheer leader. Especially when they are fried. 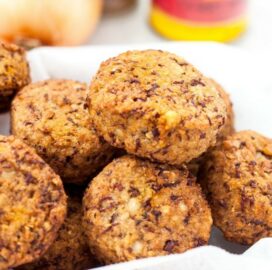 These crispy, high protein baked falafel muffins are completely vegan and gluten free! Naturally low in fat, these healthy savoury bites are low in fat and the perfect snack or meal addition.
No ratings yet
Print Rate
Author: Arman @ thebigmansworld

Please ensure you coat your muffin tins VERY generously with oil- The lack of bread crumbs or grains in this mixture makes it very prone to sticking to it.
If desired, these can be pan fried- Simply coat a frying pan generously with oil and fry on medium-high for 3-4 minutes, flip, and repeat until golden brown.
These muffins can be refrigerated for up to 1 week or frozen for up to 2 months.
Tried this recipe?Give us a shout at @thebigmansworld or tag #thebigmansworld!

Are you a fan of chickpeas?

Can you handle legumes well?

What is your favourite way to eat a sweet potato? Maybe I’ll become a fan.